I was considered a youth once, only a few years ago in fact. Yes, I remember those days. Casting my first ballot in 2010 in favour of the Liberal Democrats; the Hung Parliament that resulted; the slight guilt I felt for being complicit in hanging said Parliament. But never fear, I thought, the politicians know what they’re doing. It’s fine. The Lib-Dems have partnered up with the Tories.

But it wasn’t fine, because that whole tuition-fee-£9000-a-year-wtf palaver happened. This is when I felt political disappointment for the first time, and I have most other times subsequently. 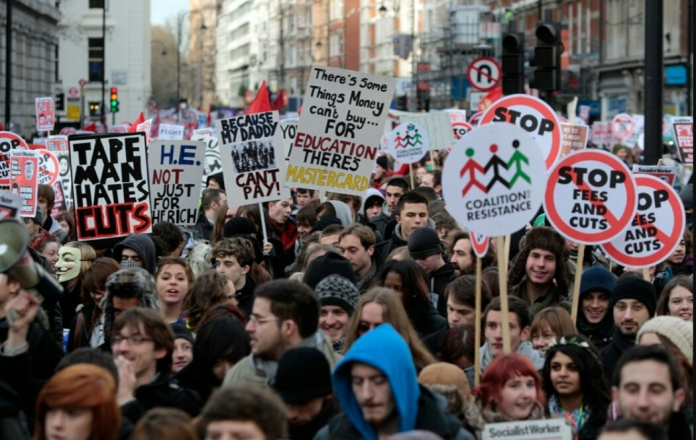 Also, that whole Scottish Independence referendum thing ensued (you might know it as #indyref). The nationalists didn’t win, but they did succeed in making politics even more unbearable.

And what happened then… ah yes! AV (Alternative Vote) referendum. So, this one right, was about fairer voting systems, and no one cared. It was voted down by a landslide. But only a few years later, it became popular to whinge that the voting system wasn’t fair. Bad timing, eh.

This brings us to the 2015 general election, older kids might remember it. This was when the polls had the Tories and Labour neck and neck. We all thought the voters had had enough of being punished by the Tories and would vote for being slightly less punished (this is what Labour and Lib Dems were offering: “nice” austerity). But no. Oh no. In the shock result, it was revealed that voters might have lied to the pollsters for fear of looking mean, and had in fact opted for severe punishment (at least in England and Wales). And so the Tories won, which meant we had to go through another referendum.

You know that moment in a film where everything seems doomed, and then your allies swoop in and save you? That’s what you did for us.

Now, the EU referendum was only on the table so that the Tories could settle some internal scores. But the rest of us—and I know this seems hard to believe—didn’t give much of a shit. The truth is, no one had ever considered or understood what the EU was or what it did for us. But, you know, that’s democracy for you. Sweet, beautiful democracy. It was our duty to find out more and develop a stance. All we needed were some good, honest facts to help us make some reasonable decisions and, er… yeah. About that.

The problem you see, was this entire debate was being conducted by Conservatives. And Conservatives have been “Crosbying” ever since I can remember. Formally, this involves two principles: (1) try to sway public opinion by over-using phrases that are ultimately devoid of meaning such as “long term economic plan” or “” is a threat to our national and economic security” and (2) find out what people fear, and find out what their prejudices are, and link the two. Very tenuously. The Remain and Leave camps adopted one Crosby principle each—I guess they flipped a coin or something—and since neither involved facts, we never got any. And you know the rest. People not-so-decisively voted to leave. And that’s how we got into this mess.

The Remain and Leave camps adopted one Crosby principle each—I guess they flipped a coin or something—and since neither involved facts, we never got any.

Oh children, these last seven years have been tough! The long string of disappointment and political turmoil. We started to believe we were doomed and voting would never change that. We thought we might even deserve it for being privileged enough to live in this post-financial crash crap-heap, filled with zero-hours-contracts, unpaid internships and the fake living-wage, which we’re not allowed to have until we’ve become old and downbeat.

Many of us stopped believing in our ideals and opted instead for “pragmatism”. It’s like when people say “I am concerned about NHS funding but I’m just trying to be pragmatic here, where will the money come from? Yeah I know people are going to die but what about the money? Yeah I know we spend billions on nuclear weapons systems that no-one ever intends to use, but that seems valid because people could hypothetically die. Yeah I know people will actually die if we don’t properly fund our NHS but where will the money come from?”

But young’uns, that’s what happens. You forget about the hope and the solutions and compassion. The status-quo seeps in and settles into your mind and makes you say ridiculous things. Life gets in the way and you get all tied up in trying to finding your purpose. But you never question why our purpose seems to be mostly about money and prestige and the hope that someone, somewhere, will be jealous of you. Then sometimes you realise that no one will ever truly be jealous of you and you have a midlife crisis (this is basically how capitalism works).

After going through all this, it became harder to fight. By the time this election came around, most of us had consigned ourselves to this messed up world. Some of us zombied along, encouraging others to vote for change, but we didn’t believe things would change. Tories were Crosbying all over the shop. Polls were saying one thing or another, we learned not to believe them anymore. I was ready for the exit poll to confirm my understanding that everything was shit so I could go to bed and have one last sleep before the world ends. But you know that moment in a film where everything seems doomed, and then your allies swoop in and save you? That’s what you did for us.

Oh you children, you crazy children with your avocado toasts and your snapchats. Your vote saved us, not just from the grip of hard Brexit but from nihilism. Many of us were ready to throw in the towel, but you have given us a reason to go on. So don’t pay attention to the oldies who seek to diminish this victory and dismiss you as naïve, you have done more for this movement than you know. And you will one day inherit this world, it’s only fair you have a say in what it’ll look like. But the fight is not over yet, so gather your strength. We have work to do. Because the game—thanks to you—is very fucking on.