So, the election was fun, right? Even if you didn’t vote Labour (and fair enough if you didn’t), watching Theresa May fall from an unassailable lead in the polls all the way to a humiliatingly hung Parliament, in a blizzard of vague soundbites, invasive and inadequate policies and flailing attempts to smear the opposition, was still rather viscerally satisfying in its own way. Early Friday morning saw a weird sense of relief from many who expected a Tory landslide.

Unfortunately, early Friday morning turned to mid-Friday morning, and then suddenly dove back into the bad old days, with the announcement that a desperate May government had decided to form a ‘confidence and supply’ agreement with the Northern Irish Democratic Unionist Party (DUP) in order to form a government.

Unfortunately, early Friday morning turned to mid-Friday morning, and then suddenly dove back into the bad old days

While, at time of writing, talks are still in progress, things seem to be going well so far. The DUP is set to gain a huge amount of influence, disproportionate to its size and vote-share, by virtue of being the only tiny, clawing advantage an otherwise desperately unstable Tory government can wield against Jeremy ‘The Absolute Boy’ Corbyn and his swarms of meme-addicted millennial voters.

So who are the DUP, and what do they stand for? They’re Ireland’s largest Protestant Unionist party (i.e wishing to remain part of the United Kingdom), emerging from the end of The Troubles as the peacetime political opposition to the Republican, Catholic Sinn Féin. They’re often described as right-wing and reactionary, defending ‘Britishness’ and Protestant rights in Northern Ireland.

The DUP were founded in the 1970s by Ian Paisley, leader of the Protestant Unionist Party (PUP) (one of many entities with some combination of ‘Ulster’ ‘Unionist’ and ‘Protestant’ in their names of the time) in the 1970s. It evolved from the PUP and the Ulster Protestant Action movement as a more hardline version of the Ulster Unionist Party (see?). After a long and chequered history during The Troubles, they withdrew from the Good Friday negotiations out of protest when Sinn Féin were allowed to participate while the IRA were still fighting, and were part of the reason why the first Northern Ireland Legislative Assembly’s Executive Committee collapsed, as they refused to attend despite gaining two seats. They nonetheless emerged from the ensuing elections and agreements as the largest of the Unionist parties, with nine seats by the 2005 Election. They remain a major force in Northern Ireland’s political scene, winning ten seats this time around. The DUP have worked with both Labour and Conservative governments in the past, meaning that this arrangement is technically nothing new – in 2015, they considered joining a ‘BLUKIP’ coalition with UKIP and the Tories, although fortunately they decided against it.

They also strongly protested against the peace process every step of the way.

While the IRA remain the most notorious of the terrorist groups of The Troubles, the Unionist side had its fair share of armed militias and paramilitary groups, and the DUP was all over them like a bad smell. Leaving aside the Unionist-aligned police and their backup from the British Army, The Ulster Volunteer Force and the Ulster Defence Association conducted their own bombings, shootings and riots, and the DUP were right there with them, especially as the IRA’s campaigns escalated in the ‘70s and 80s. At one point they openly attempted to create a Protestant militia, parading in uniform and rallying with thousands of masked men who demanded that the British government recruit them to fight the IRA (the British, to their credit, refused). They also strongly protested against the peace process every step of the way. Essentially, as has been repeatedly pointed out, the DUP are strongly connected to Irish terrorism, albeit terrorism aimed (largely) at the Irish Republican movement rather than the IRA’s more broadly targeted campaign against the Unionists and the UK state. (Given their past conduct, of course, I suspect that the only reason the various Unionist groups rarely launched attacks outside Ireland was that doing so would have undermined their cause rather than supported it – they showed no remorse otherwise.) Their members have in the past advocated air strikes against towns in the Republic of Ireland, while their now-retired First Minister Peter Robinson was a founding member of the Ulster Resistance paramilitary group, who smuggled rocket launchers and other weapons into Ireland. It should also be noted that 85% of those killed by loyalist paramilitaries were civilians not combatants in republican paramilitaries.

Policy-wise, the DUP is a shit-show of bigotry and reactionary religious conservatism. Founded by hard-line Protestants (Ian Paisley was known for his fiery speeches denouncing papism just as much as his defence of the Union), they maintain strong ties with the Orange Order, a group more suited to the weirder parts of the US Conservative fringe than anything in the Western European mainstream. They’re homophobic, racist, bewilderingly enamoured with ‘young earth’ Creationism of all things and one of the main reasons why Northern Ireland continues to ban abortion, an odd choice given their otherwise virulent opposition to all things Catholic. Oh, and they’re against line dancing and Rihanna running through wheat. 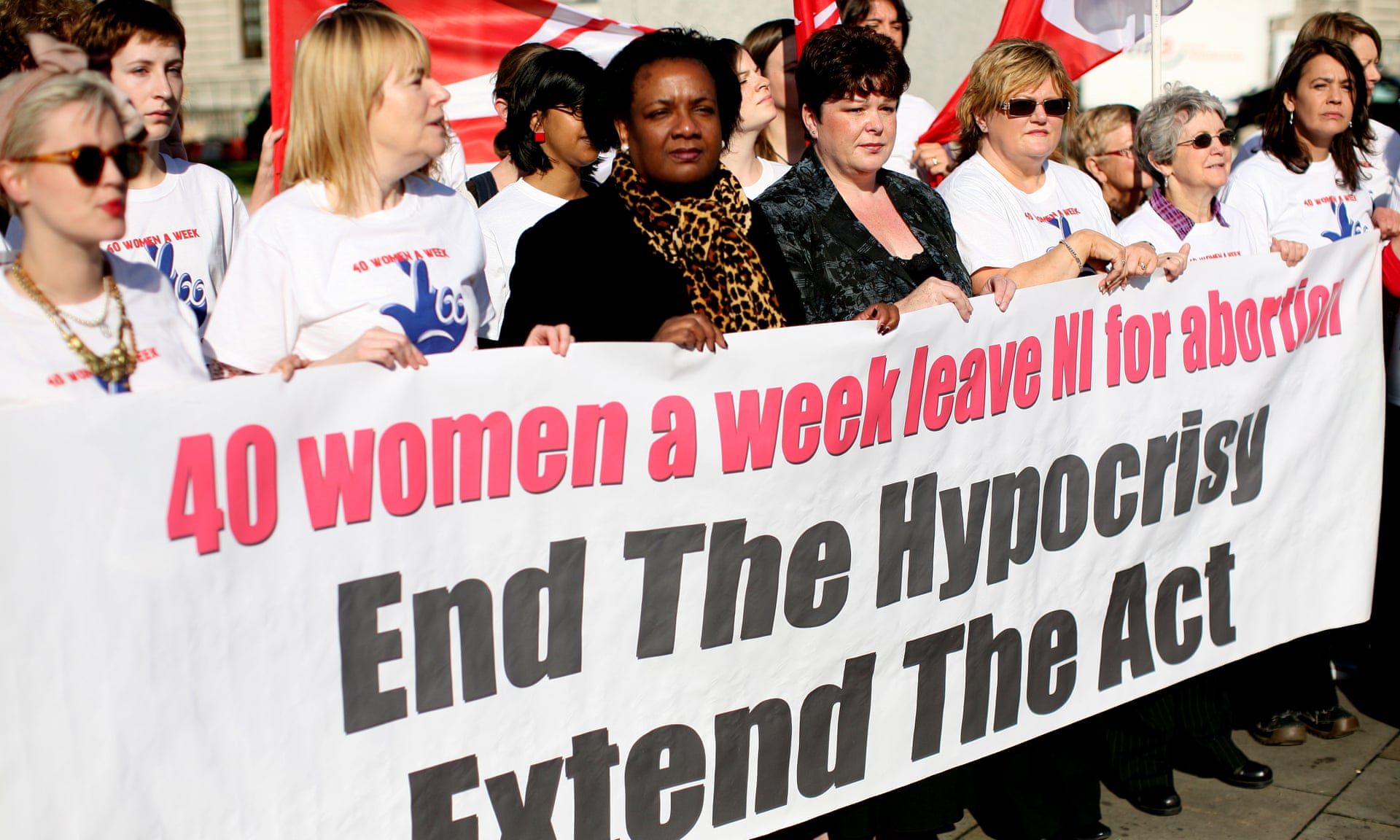 (About 60,000 women have travelled in secret from Northern Ireland to Great Britain for terminations since 1970, according to Amnesty International. Photograph: Graeme Robertson for the Guardian)

They’re also known for climate change denial, and opposed to gay marriage to the point of abusing peace treaty powers to spite Sinn Fein and block legislation on it (‘Peter will not marry Paul in Northern Ireland.’) They were also pro-Brexit (as you might expect, given all of the above), although even they aren’t in favour of a hard Brexit, leaving the beleaguered May government stuck between them and UKIP.

They’re also pretty hard-line on counter-terrorism, ironically, supporting Gordon Brown’s 42-day detention bill back in 2008 (What? Did you think Labour were above using the DUP as a bargaining chip as well?) and calling for expanded counter-terror and cyber security legislation. Otherwise their policies are surprisingly liberal, calling for increases in the National Living Wage, retaining the pension triple lock and safeguards on universal benefits.

Of course, the weaknesses of small majority Parliaments mean that another election could rob the DUP of their new-found influence in six months’ time. On the other hand, I can’t see the Conservatives fighting too hard if the DUP decides to start chipping away at the rights of millions of British citizens just so Theresa May can stumble her way to Brexit. Worse, there’s concern that this may destabilise Northern Ireland’s fragile and hard-won peace settlement, part of which hinges on the British Government remaining neutral in some Northern Irish affairs. As a desperate power grab, it may have bought Theresa May some time, but its consequences could be dire.