Crude Apache is a local community theatre company which has been running, in one form or another, for the last 24 years. They are committed to producing accessible and thought-provoking theatre, and their tradition of using non-theatre spaces for their productions allows for innovative use of space and setting. The industrial, bare-bones space of The Shoe Factory Social Club in St Mary’s Works played well with the theme of their latest production, Howard Brenton’s Magnificence – a timely, if sometimes surface-level, exploration of the 1970’s squatters movement.

The play touches on the rise of neoliberalism, state-sanctioned brutality, homelessness and the effects of state brutality in turning resistance into a determination to hurt, and hurt spectacularly. Directed by Tom Francis, this was a solid adaptation of the original, and very successfully captured the arguments we are still having – with ourselves and each other – almost 50 years on.

The five squatters, Jed (Ben Dixon), Will (Greg Lindsay-Smith), Mary (Jo Hipperson), Veronica (Joanna Swan), and Cliff (Colin Barrett), and the non-verbal “Old-Woman” (Patricia Fernandez Dominguez) inhabited their characters very strongly, even as the group’s interactions seemed uncomfortable and inorganic at times. This discomfort, and the overall pacing of the first act, was able to capture the feeling of being stuck and uneasy, and really worked with the various tensions between the characters, although it did feel less successful than the second half.

These kinds of arguments, the difficult conversations and the need to seem “ideologically pure” still resonate today

The exchange between Will – a swaggering, self-confident and somewhat arrogant leftier-than-thou bloke – and Veronica – a posh BBC presenter and hesitant revolutionary – was delivered authentically, and captured Burton’s comments in 2016 about the revolutionary culture in the early 1970’s: “People felt a kind of intellectual squeezing, as though Lenin and Mao were shouting in their heads. You’re pressured to act or be judged ideologically impure.” These kinds of arguments, the difficult conversations and the need to seem “ideologically pure” still resonate today, and the arguments these two characters have would not necessarily seem that out of place in, for example, leftbook or on twitter. The need for action, and the reality they are acting against, is re-established against the backdrop of these conversations by the violence that follows, by the actions of the bailiff and the constable – at no point is anything clear cut, at no point is anything decided for the audience. 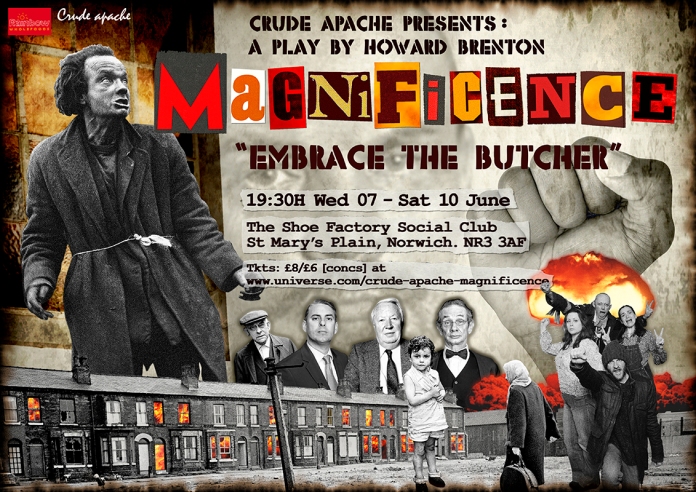 (Image thanks to Crude Apache)

The characters, and script really shine where they employ parody, and Russel J. Turner’s performance of Babs, the dying Cambridge Don/ ex-Tory, was masterful, witty and thoughtful – strangely, this character had the most insightful critiques of the neoliberal, managerial shift in right and right-of-centre politics that has taken place over the last half-century. The moments where the play pokes-fun at the hard-knocks bailiff (Richard Brook) and the clean-shaven, “liberalised” police constable (Tom Butterworth) were surreal and entertaining, and this lightness enhanced the sinister violence that followed – it added dimension and nuance.

Ben Dixon’s Jed captures the desperations and anger of the disenfranchised, and the play between the previous soft humour and verbosity is held starkly against the quiet, seething tension that underpins Jed following his release from prison. The scene where Lenin (Tom O’Sullivan) is quite literally shouting in Jed’s head is powerful, it shows the characters struggle and his vulnerability to the grandiose and violent. The exchange between him and “Alice” (Andy Bennett), the managerial, self-serving new Tory, produced a clarity and connection that had seemed missing from the character before, and produced a model for discussion and de-escalation, even as the outcome was one of futility.

If you don’t ever reconsider your own behaviour, ask hard questions of yourself, you never get anywhere.

Cliff’s closing lines might have benefited from an increased presence for the character earlier on – until that point he had few lines, which felt like a lost opportunity for the audience to fully connect with his final point. However, the conclusion was strong, concise, necessary. The emphasis on waste, the need for constant work and progress, rather than symbolic instances of destruction and violence, was truly bought home by this closure. Tom Francis’ comments in the programme brings this into the horror of the now, recounting his concerns about going ahead with this production in light of recent events, and concluding that:

the reaction of the government, and much of the press – doubling down on a black-and-white narrative of good and evil, refusing to accept the notion of sincerely and critically examining their own policies to ask if they are really helping – made me both extraordinarily sad and angry. If you don’t ever reconsider your own behaviour, ask hard questions of yourself, you never get anywhere.

This was a sobering production, a necessary hard-look at discourse and action, cause and effect, and the questions raised about how to make progress, how to engage, how to resist are vitally important – now and before. I would absolutely recommend going to see this, going to see this with someone, with a group of someones, with somewhere to go and digest together afterwards.

One thought on “REVIEW: MAGNIFICENCE – EMBRACE THE BUTCHER”