If you have read my work here at The Norwich Radical and elsewhere (shameless self-promotion, I know) it should be apparent that I enjoy satire. And as reality subtly blends in a dystopian crap-scape, one of the very few plus sides is that the satire game is booming. In addition to the plethora of late night hosts to match personal preference (Colbert does it for me) keeping us informed and helping us to laugh instead of cry, the humble illustration has been holding a mirror up to the corrupt, the cruel, and the incompetent and making them look ridiculous, and they know it.

Some of you out there will be familiar with the creative method and maxim “show, don’t tell”. Cartoons exemplify this principle and what’s truly amazing about them is that they manage to cut through the bullshit in doing so. A pithy comment about Tories taking money from the poor can be refuted as unfair or as being the liberal media’s bias (I’m looking at you, BBC!). However, an illustration of a fat cat taking pinching money from a beggar’s pocket is a lot harder to reply to. Through the use of visual metaphor and presenting the impossible or ridiculous, cartoons tell a direct truth. They aren’t stuck in the grey quagmire of political speech; they exist in black and white moral space. Anyone can say a politician is corrupt, cartoons show us that they are.

Illustration is ruthlessly efficient and efficient in its ruthlessness.

Comics in general, but specifically cartoons, are excellent at illustrating ideas quickly. As already mentioned, they have access to the unlimited imagination of the artist and aren’t limited to photo-realistic depictions of events. As such, they can reduce complex social issues into a few well-placed pen strokes. Even further than that, whilst they can use captions, they don’t have to. Language isn’t necessarily a barrier. Moreover, if done correctly, neither is age or political insight. A cartoon depicting the Theresa May, u-turning on the motorway, tells us all we need to know: she changes her mind a lot and this is dangerous. Illustration is ruthlessly efficient and efficient in its ruthlessness.

What’s more, satirical cartoons are egalitarian in their focus. For example, if you look at the work of Steve Bell, and you should, all politicians become grotesque, dramatised versions of themselves. No one is safe; the cartoons have no political allegiance. They obey only that which is funny and ridicules. They are bi-partisan visual assaults.  Strips act as universal magnifying glasses that capture all flaws, everywhere. Our Lord and saviour Jeremy Corbyn comes off no better than Supreme Overlord Theresa May, and this has a certain appeal. The caricatures that occupy that black and white moral space I mentioned earlier are all hideous. This, in turn, reminds us that all politicians are flawed and there is something inherently ridiculous and worth ridiculing about them. 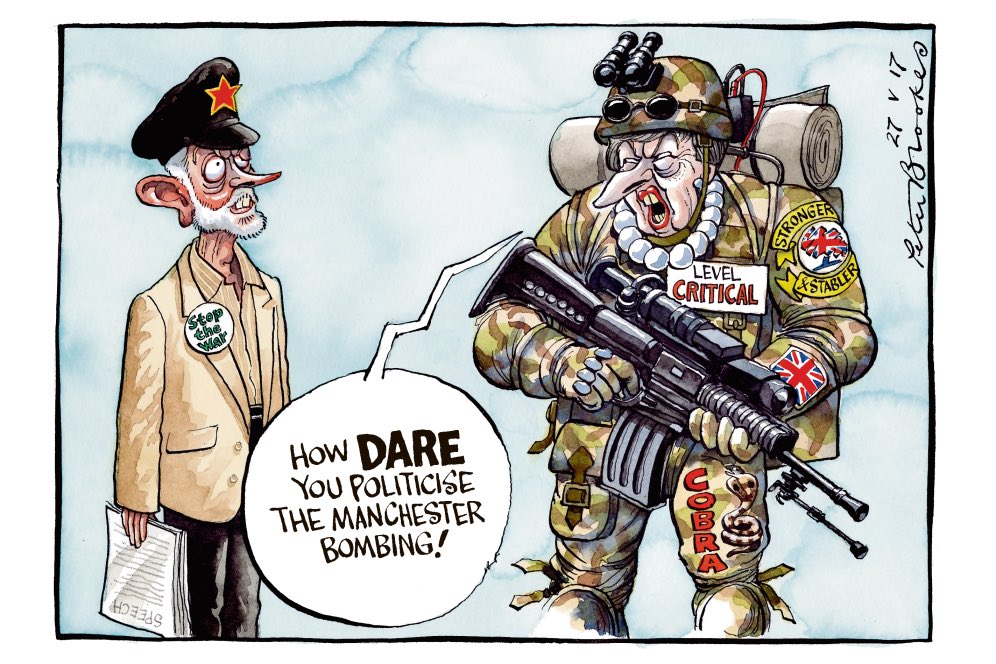 Cartooning is also – and believe me this is praise, not a condemnation – a “low” art form. No matter how witty and acerbic a strip is, there is something fundamentally childish and absurd about drawing silly pictures to make a point. Because they can appeal universally and attack indiscriminately; and because they are crass, and rude, and vulgar, and stupid they are also irrefutable.

As I said, cartoons are hard to reply to, this is  because they are so obscene. They are the equivalent of drawing a cock and balls in a debate, if that cock and balls, aside from being inherently funny could somehow highlight flaws in an augment. The powerful can’t be seen to be taking them seriously, despite the fact that they often make fun of something incredibly serious. And even if a politician deemed to debase themselves (perhaps in some foreign broken state, politicians are the wisest and best of society)  the end result would be something like “PRIME MINISTER IN BATTLE WITH HILARIOUS ILLUSTRATION.” A genuine rebuttal to visual satire is impossible as it only breeds more satire.

because they are crass, and rude, and vulgar, and stupid they are also irrefutable

At least that’s mostly the case. In countries where free speech means you’re free to agree with those in power in whichever fashion you like, cartoonists have been arrested, attacked and killed for cracking wise. The Charlie Hebdo attack, and Turkey’s current situation haunt would be satirists as a cautionary tale. One that, intellectually, should be ignored but pragmatically cannot be. I have no clever approach or considered reasoning to deal with this other than to say cartooning is free speech and no-one should have to fear for their lives if they express themselves.

There was no real smart-alecky reason for this article. My argument is pretty simple.

Hardly groundbreaking, but that’s okay as that wasn’t my goal in this piece. I just wanted to bang on about something I like, no tea, no shade. To espouse a medium and revel in its technique, its unique qualities and its success is admittedly indulgent but immensely satisfying. Much in the same way using that cock and balls simile was admittedly indulgent but immensely satisfying. I think with the endless barrage of bad news that is the world it’s a relief once in awhile to write about something you enjoy and why you enjoy it.

Featured image © Richard Worth / Jordan Collver on The Nib