I moved to Norwich five years ago. Well, actually, I didn’t move to Norwich at all. When I relay the story of how I came to live in Norwich I always jokingly say I came to visit and never left. For me Norwich was great – love at first sight. The reason why I came to stay in Norwich was a lot less great and a lot more painful. I came down for a week to visit my mother and celebrate our birthdays (they’re six days apart). I was living in Aberdeen at the time, so at the end of the week my mum drove me up to the Scottish border as planned. She was going to see friends, and I was going to carry on my journey from there. But I didn’t. I couldn’t. The prospect of continuing my journey filled me with crippling fear. It became obvious to my mum that I couldn’t go home. And so we turned around, and came back to Norwich. I ran away.

This time in my life was very difficult. I was working in my Qualifying year as a Primary School teacher. When the parents at my school learned that I am dyslexic, many of them were unhappy and did not want me to teach their children. As a result, my head teacher made my working life a living hell and bullied me out of my job. I was also in a very unhealthy relationship, and had lost so much weight that my friends and family were becoming extremely concerned. In the week I’d spent in Norwich, I had a complete breakdown. I could not go home to Scotland. I was far too ill.

Norwich is far from a graveyard. It’s a place of birth and rebirth.

So Norwich became my new home. For almost six months I was a selective mute, unable to speak properly to anyone except my mother. She would talk for me. As I became better, I started a job in an office. But six months later I began experiencing extreme symptoms which I later learned were a result of my Ehlers Danlos Syndrome. It is thought by some in the field that an extreme trauma can cause previously-dormant EDS symptoms to flare up. I dislocated both wrists and an ankle in the space of an afternoon. I lost my job. In the period of my first 12 months in Norwich I had gone from an extreme mental breakdown, to recovery, to extreme chronic and acute pain with constant and inexplicable dislocations. It was the first time doctors were describing me as disabled. 2012 really was not my year. 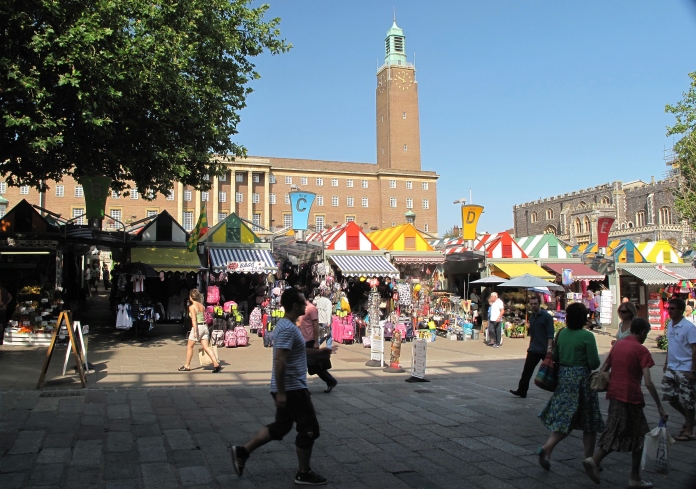 For me, Norwich became a place of transition. A place to grieve for the life I thought I would have, the loss of health. It was a place to learn – about myself, my fears and my true desires. It gave me a moment to pause. It gave me time to reflect. It gave me time to hurt and heal. I was able to discover more about my condition. I was able to experiment and find new treatments. There was a time when I couldn’t think of living anywhere else. But the stronger I become, the more I realise that although Norwich is my oasis, it is not really my home. I ran away from my home five years ago, and sought sanctuary here. And now the time for me has come to go home again, stronger and more resilient than ever.

It’s time I stopped running away.

People often joke that Norwich is the graveyard of ambition, but I don’t think it’s true. It certainly hasn’t been for me. By living in Norwich, I have come to see the world in a very different way. I have been allowed the opportunity to develop creatively, and to be involved in my community. I’ve developed drive and passion I hadn’t felt in years – from volunteering at Foodcycle, to standing as a Liberal Democrat candidate in our local elections. Possibilities which once seemed impossible are now at the tips of my figures should I choose to reach out. It’s the people of Norwich that create this. So many people I’ve met over the past five years have shown me compassion, kindness and engaged on many levels. My identity has changed through these people. I am becoming a better, more understanding person. Norwich is far from a graveyard. It’s a place of birth and rebirth.

The prospect of leaving Norwich saddens me greatly. I’ve made so many memories, developed strong connections. There is so much I will miss, so many people I will be sad to leave. But I will never truly leave. I will never lose those precious connections. Norwich may be a haven, but it is part of a bigger picture. It is part of the world, and must never be lost or forgotten. As corny as it sounds, wherever I go I will always take a piece of Norwich, and its people, with me.

For so long I have felt like I have run away from my problems. By coming to live in Norwich I have learned to accept that I needed this time to heal, process and develop. I’m leaving as a stronger, confident person. I’m eternally grateful for this. But it’s time I stopped running away. Living in Norwich gave me the time to press pause on my life. Now is the time to press play.