Theresa May has announced a general election that is set to take place on June 8. Some might say this is a bold move, a drastic U-turn that goes against previous remarks, though I argue it is only a cheap and damaging attack on a struggling opposition that highlights her opportunistic immorality. Of course, she remembers her promise to not call an early general election, but she smells Labour blood and cannot resist.

In usual general elections, leaders of political parties are asked to take part in debates with each other and the general public on television, sometimes live. I believe that live televised debates should be a mandatory part of every major election, especially general elections and local council elections. Live debate with unrehearsed questioning is the best tactic for accessing a politician’s true beliefs, as those that truly believe in what they stand for have unguided, spontaneous responses that show they’re the right people to lead the county. Theresa May’s instant tantrum about the idea of televised debates displays her complete lack of interest in speaking to the people.

Her reasoning is that she has said all that she needs to say in her televised statement. The speech was written, written again and edited twice over. And it was almost certainly not written by her. No direct questioning followed the speech, much like press conferences given by Donald Trump, May’s new best friend over the ocean. May’s reasoning ignores the public totally. She misses the point. Live question and answer sessions are for the public to ask the questions and hear what politicians have to say. They play a hugely important role in how a voter decides who to vote for. How a person speaks for the issues they stand for, reacts to criticism by strangers and how they hold themselves amid colleagues says far more about a candidate than a four page manifesto. Televised debates matter, and it is frustrating to hear the leader of the county not only dismiss them, but completely refuse to take part. 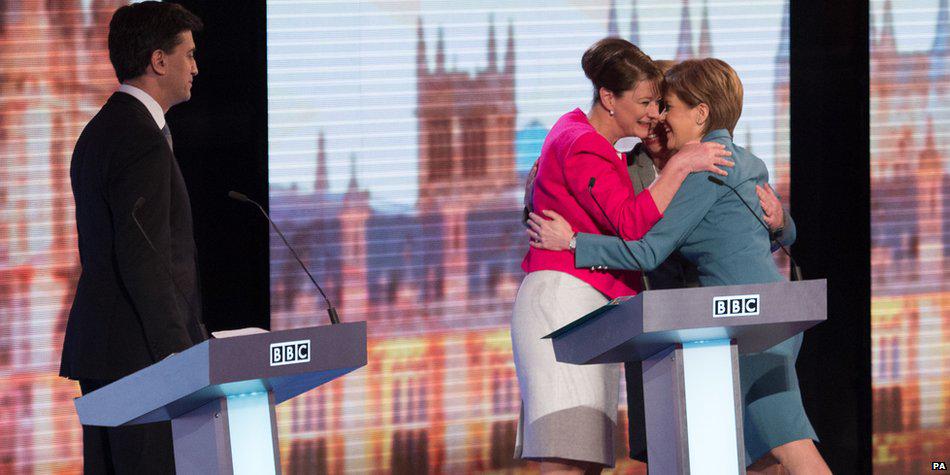 (A reminder of the 2015 General Election TV Debates, which included the leaders of the SNP, The Green Party, and Plaid Cymru for the first time / via the Independent)

Televised debates are not only for national matters – I also believe that they should be a regular part of local television and local politics. Voter turnout is depressingly low for local elections and disillusionment is a major reason for that. People don’t really care about things they aren’t engaging with on a fairly regular basis. Most might not even know their local ward councillors if asked. Weekly updates on major local television with local councillors might help alleviate this problem; then, weekly debates between leaders and opposition should take place on the same channels. Perhaps, people would become more engaged and energetic when they hear what their representatives have to say on live television every week.

If you don’t answer a question in an exam, you score zero. It should be much the same in politics.

In Norwich and Norfolk, it could look something like this. Once a week on BBC Look East or Mustard TV, our MPs for Norwich North (Con, Chloe Smith) and Norwich South (Lab, Clive Lewis) could appear live for half an hour to answer questions from a live audience about what they’ve been doing that particular week to improve the community they represent in Parliament. Perhaps once a month, our representatives at county level could take part in a live Question Time-styled debate, live and in front of unscripted members of the community.

Whether it’s Mustard TV, ITV Anglia or BBC Look East, I wish someone would take the reins on this. The gap between the most powerful and the least powerful is widening and yet we allow people like Theresa May to refuse to even engage in conversation with the people she works for. If you don’t answer a question in an exam, you score zero. It should be much the same in politics. Regular, live, and equal discussion is essential for keeping everybody informed –  so it is no surprise that May wishes to keep it that way.