I’ll start this review with a confession – Unthology 9, edited by Ashley Stokes and Robin Jones, is the first of the Unthology series that I’ve read. I can’t comment on the progression of the anthology series, nor on where any existing trajectory might take it. This review will stand alone, as Unthology 9 does for me.

It opens with an introduction: ‘Welcome to the Archipelago.’ This is a stylized, imagery-heavy bit of prose that could feel gimmicky, but mostly avoids the trap. And the concept – of an oceanic journey, of travel through and around and between and beyond the islands of an archipelago – feels appropriate to what follows.

This is an eclectic anthology, brushing across a range of genres and tones and ideas, and yet somehow it mostly hangs together – a similarity of atmosphere perhaps, a shared sense of discomfort and melancholy, of simple strangeness. There are a number that stand out in terms of quality and originality, a handful that fit less well, or are less accomplished in terms of writing ability, and others that feel a bit too similar to each other.

a similarity of atmosphere perhaps, a shared sense of discomfort and melancholy, of simple strangeness

Some of the stories really do stand out – I loved them. I by Rosie Gailor is a fantastically strong opening story. Visceral, with a brutally matter-of-fact tone and raw language, it flings you headfirst into what is an often bleak and disturbing anthology: it sets you up for what’s to come and startles you out of any complacency you might be feeling. Motes by Mark Mayes has a lovely conversational tone that draws the reader in and makes the strangeness of the concept seem part of the everyday. The story that follows, Sarah Dobbs’ As Linda Was Buying Tulips, is another of my favourites, with wonderful descriptions of mundane details, like ‘Merlot stained the commas of dry skin on her bottom lip’.

As can be guaranteed in almost any anthology, not all the stories are to my own taste, but are nevertheless of high quality, while others fall into the short story trap of never really going anywhere – not that something significant has to happen, but I prefer a sense of direction and movement, and some in Unthology 9 feel like they’re standing still. 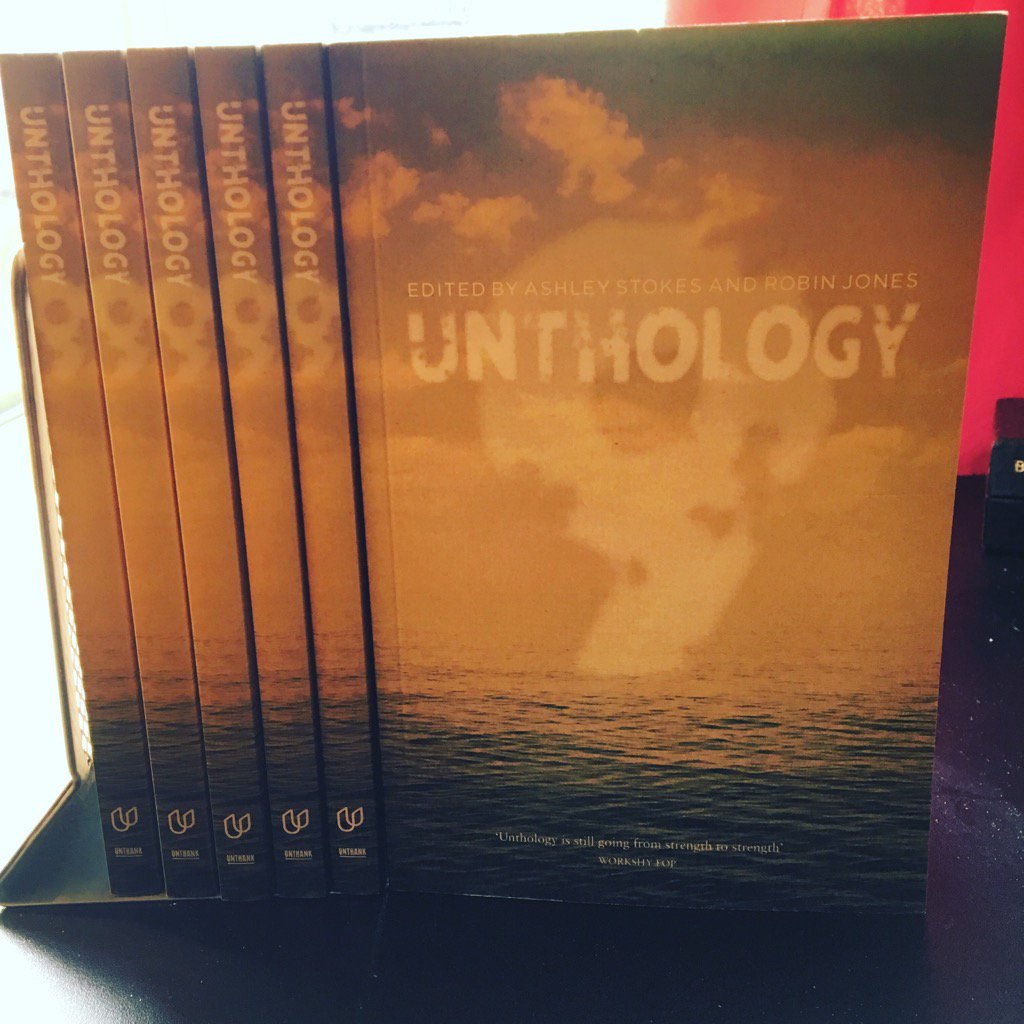 For all that it’s a diverse range of stories, that occasionally sit uneasily together (Gordon Collins’ story was far more in the realm of ‘surreal’ than any of the others in the volume), by the end the reader has had chance to get to grips with the themes in common, the thread that runs throughout. There is an arc, from despair to the first glimpse of hope – In Rehearsal by Sarah Evans, by far one of the strongest stories in the anthology, hints to this in the path the story takes, from claustrophobic anxiety, failure and doubt, to a foundation of success and the hope for more, that feels like a first gasp of air. And certainly there is a fulfilling sense of symmetry in a volume that begins with a bleak, brutal suicide in I and comes to a close with Roelof Bakker’s Yellow – melancholy, and yet with an unexpected burst of hope, of optimism at the end – much-needed after many of the preceding stories.

But this symmetry, this pulling together of disparate stories through common themes and threads, is also one of my greatest criticisms: the sheer number of stories involving suicide, implied or more firmly explicit within the text, burdens the anthology. Halfway through, on encountering yet another instance of suicide in Scapegoat by Tim Love (an otherwise robust story with some excellent imagery such as ‘Details congregate at extremities – the footnotes of a page; the end of a story; down the arm to fingerprints…’), I was left with a sense of ‘is this another suicide?’ rather than any greater response. The frequency of this theme harmed their impact, left me feeling tired – and maybe that’s what it’s supposed to do, but for me it doesn’t quite work – just a few less in the volume as a whole would have given many of the stories involving suicide greater impact, and there would still have been a common theme. Instead, it left me numb to it – doing many of the stories as they stand alone a disservice.

I was left with a sense of ‘is this another suicide?’ rather than any greater response.

While I can’t give a wholeheartedly positive verdict on Unthology 9, I nevertheless found that almost every story – whatever my final feelings – grabbed me in the first paragraph and kept me reading. And I’d say that goes for the anthology as a whole too – even with the stories I didn’t like, that made me hesitate, I kept reading. I could feel the volume working as a whole, though not a whole without flaws and weaknesses. It’s one to try, to dip into or plunge through – and I’ll be interested to see where they go next. So don’t go into this with expectations to be met or assumptions made – I can almost guarantee this is an anthology that will surprise.