World famous art comes to campus and it looks wonderful, works subtly with Lasdun’s buildings to eulogise their monumental quality whilst highlighting the interplay of light with the elements.

Then those pesky snowflake students start moaning that the figure might be perceived as about to jump and could be a ‘suicide’ trigger.

What is not to like, is that the snowflake students are fundamentally right to make their views known: they are confronting an authoritarian, elitist art work imposed on their community from ‘above’.

the snowflake students are fundamentally right to make their views known

Gormley, he morphs effortlessly from ‘Sir’ to ‘Antony’ when the occasion requires, is a key player in the art establishment: educated at Ampleforth and Trinity, natch. What is poignant about the whole episode is that UEA has bought, once again, into a trite and discredited approach to public art: the lumpen masses to be educated by a genius touched by the divine and dubbed knight of the realm by Gloriana 2.

The question that springs to mind is: would UEA have welcomed a piece of any art work, let alone a ‘challenging’ piece on a rooftop, from a group of student artists or artists from the local community to be installed on campus? I think most readers with a knowledge of the University would answer definitely not. 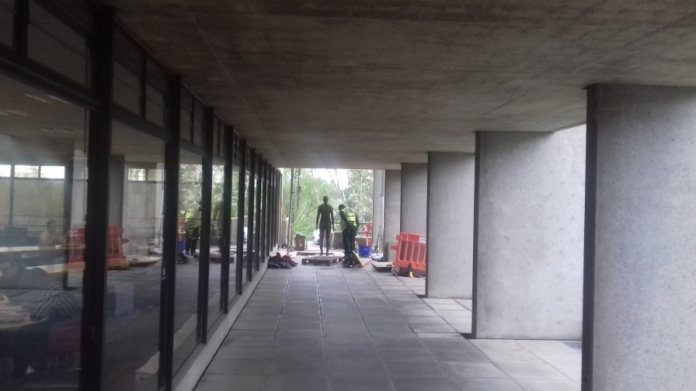 (‘A workman, probably not Gormley, installing one of the pieces’ – via Tony Moore)

On the Gormley brand, itself, one could argue that it comes in a direct line from fascist artists such as Arno Breker where the universal form triumphs over the individual but any debate along those lines would, again, be irrelevant to the University.

I would suggest that to make sense of the Gormley case, and what it means for the production of public art, students could usefully pose the following questions about process:

Public art should never be imposed on a community, is hopefully the lesson that the Gormley case might teach us.