If you’re reading this you are doubtlessly already aware of Kristen Visbal’s sculpture Fearless Girl, that has taken up residence on Wall Street opposite Arturo Di Modica’s Charging Bull. Sculpted by Visbal and funded by State Street Global Advisors Fearless Girl appeared on March 7th, 2017 (the eve of the Women’s March) and went viral. Its intention is to address the lack of women at the top of huge corporations.

Most people would have to agree this is a worthwhile cause; unfortunately, Di Modica isn’t exactly happy about Fearless Girl’s placement and is currently campaigning for its removal. Before we decry this as sexism or fear of the power of women, in any fair society he should be allowed to state his claim, so let’s hear it.

Essentially Di Modica (and by extension his attorney Norman Siegel) has a creative and a legal concern. Di Modica argues that original intention of his piece is to express ‘freedom, world peace, strength, power and love’ and that the placement of the new statue poisons that intent.

The defiant girl has, according to Siegel, transformed the bovine beast ‘into a negative force and threat’ through ‘a deliberate choice to exploit and to appropriate the Charging Bull’.

It’s difficult to argue with the latter part of Siegel’s claim. The Fearless Girl is only fearless because of the Bull. Nevertheless, the first section doesn’t quite hold water. One can’t help but feel that the Girl isn’t the catalyst for the Bull’s transformation; she’s the reaction to it.

the Girl isn’t the catalyst for the Bull’s transformation; she’s the reaction to it.

The Charging Bull was installed in 1989. A simpler time when beloved Hollywood actors-cum-Presidents and groundbreaking female Prime Ministers waved goodbye, leaving behind Neo-Conservatism as their shared legacy. The Bull represented the strength of the market and how it pulled Wall Street out of the 1987’s Black Monday.

But over time (actually immediately, there was a secondary crash in 1989 but let’s give the poor cow a chance) the idea of the strength and positivity of the free market have soured. Corruption, infiltration into politics, wealth division and gender divide all revealed themselves within this system. As honourable as Di Modica’s original artistic intention was, it’s not the Fearless Girl’s proximity to the Charging Bull that has poisoned his optimistic vision; it’s the Charging Bull’s proximity to Wall Street.

The Charging Bull has become, for many, a symbol of reckless greed and dangerous power. It’s the golden calf of capitalism. The irony is that artistic intention and interpretation is a buyer’s market. You can push whatever ideals of a piece you want, but ultimately the buyer decides the value and values any piece may have.

Di Modica is somewhat entitled to be frustrated as an artist. On a human level, it’s understandable that he may feel his work is compromised. Further to that, this compromise, constitutes part of the legal defence.

In Di Modica’s defence (or attack?) Siegel has quoted a 1990 copyright statute stating that Di Modica has the right to ‘prevent any intentional distortion, mutilation or other modification of that work which would be prejudicial to [the artist’s] reputation’.

It’s a broad claim and certainly open to interpretation. To be honest, this might move the argument out of my wheelhouse as I am not a lawyer. Truth be told I haven’t even attempted to sit the Bar Exam, but let’s take a college try shall we?

The Second Rebuttal: That’s a technicality!

The Fearless Girl hasn’t physically mutilated or modified Charging Bull. One might concede that she has distorted it in the sense that viewing Di Modica’s sculpture might be a more difficult thanks to the positioning of the brave little tyke. That defence, however, fails if one considers that the Bull is distorted by passing tourists and admirers, that intentionally obstruct the view of the Bull or ridicule it by posing with its testicles.

Society’s opinion of capitalism is what distorted the Bull.

If we interpret distortion, mutilation, and modification to be figurative, relating to the message or meaning of the piece, we fall back to the first defence. Society’s opinion of capitalism is what distorted the Bull.

There is a second irony regarding Di Modica’s complaint. After he had finished constructing Charging Bull, it was displayed as an act of guerilla art. The city of New York had no desire for the sculpture. Di Modica, of his own volition and without permission, displayed the piece as a message of economic hope.

The Fearless Girl is exactly the same. Without permission, she is standing up to a biased and broken system; she represents a need for positive change. She represents the problem of a lack of gender diversity, and calling attention to that fact is the first step to changing it. 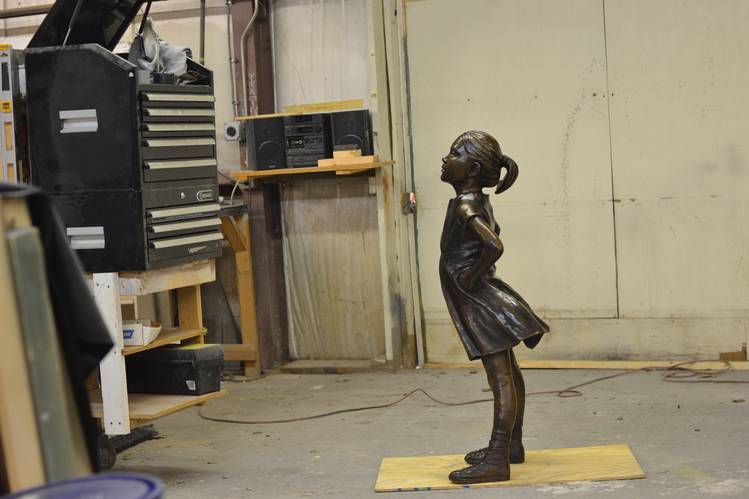 ( Fearless Girl before placement via WSJ )

I don’t think Di Modica is necessarily misogynist or earnestly against the message that Fearless Girl stands for. It’s too reductive and easy to slap this label onto him to dismiss his concerns. After all, his intention seems to come from a good if slightly out of touch place. He is an artist overly but understandably protective of his work. What does frustrate me, though, is that in his quest to preserve the integrity of the message of his own work, he is actively dismissing that same message in a new piece of work.

The Bull no longer has the monopoly on ‘freedom, world peace, strength, power and love’. This defiant little girl demands these concepts physically, artistic and socially. Di Modica’s frustration is a telling inability to recognise these demands.

This story could still have a good ending. New York’s Mayor recently extended the Fearless Girl’s permit for a year and Di Modica has not yet filed a lawsuit. There is still time for Di Modica to realise that artistic interpretations, like society, can and must change in order to become better.