Initially lamenting that I wouldn’t be in London for International Women’s Day, missing the annual WoW festival at the Southbank Centre, I was pleased to find out that Córdoba has a whole month of activities to mark the occasion. Whilst the practicalities of striking weren’t feasible – for example, I cannot afford to take a day unpaid and no unions exist for the work I do. I was informed that there would be a walk-out between 12-12.30pm, and this happened to be when my break between two classes fell. I used it to do some grocery shopping, so not particularly radical.

Again, I found some time between classes at 7pm, where I had an hour break, so where I would normally spend time planning, I joined the women’s march instead. I went with a fellow teacher and her boyfriend, another friend joining later. As we approached the march, we heard the sounds of loud drumming from the front; there were people of all genders and ages with t-shirts and placards about everything from women being taken advantage of at work, to violence against women.

Although the march itself was more like a stroll, stopping and starting at various points, and the few chants that were started didn’t really catch on, the air was full of political conversation. We talked also of how the personal is political, my friend telling me that her boyfriend, photographing the event, had told her the previous year they couldn’t kiss because it may end up in the newspaper due to her race. Perhaps having Spanish ancestry, I have the fortune of not standing out too much as foreign, as other non-Spanish people had told me they faced more street harassment here than at home. We spoke of body positivity and mental health, as well as those who had died as a result of domestic violence, my friend having attended a vigil in La Plaza de Corredera the previous night.

I left the march to go back to teach, and although my adult class hadn’t mentioned the significance of the day that I had subtly written on the corner of the board, I was pleased that my teenage classes knew about it. I told them there were lots of events going on, and on Saturday I made my way down to La Plaza de Corredera to check out the festivities myself. Although the exhibition wasn’t what I expected – there were various stalls selling arts and crafts – it was great to see something celebrating the work of women, with signs about feminism around the streets. Again, having been told of Córdoba’s conservatism, it was refreshing to see these pockets of activist art exist.

It was a warm, sunny day, so some of the day was taken up by drinking cañas, and we missed the acrobatic show, but snippets of all the events can be viewed on Facebook. The next event in the Salon de Actos was a one woman show, obviously, in Spanish. So, although I only understood words, I was able to glean some of what it was about. They played three different characters, starting with a woman hanging washing, but instead of being clean, she dipped her hands into a black ointment and stains each sheet. This character seemed to represent the domestic lives of women, and was probably character that expressed the most anger. She changed costume on stage, wearing gold heels and a glittery red top, and this character seemed more humorous. I was taken aback by the last character, where she covered her body to the sound of Arabic-sounding music, and covered her head to depict a Muslim woman.

Without the context, and without the experience of being a Muslim woman, I wasn’t sure how to take this part. Plus, the other two characters both seemed to have some humour, whilst the Muslim character had none. Andalucía has a strong Arabic influence due to its history, so it was good to see varied stories, but whether this was done to represent the serious, spiritual side of women in general, or whether it was relying on stereotypes of Muslim women, I can’t say for sure. At the end there was a display of different legal articles, and the names of different women, so I could only assume that what unified these stories was that of violence against women, and each was played with emotion and authenticity. The show ended to a standing ovation. 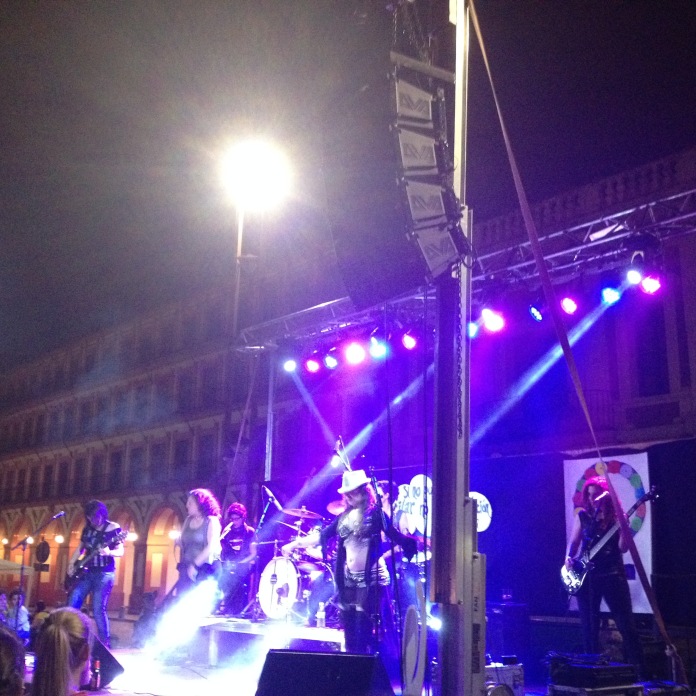 I had left by the time the next show started, but viewed a snippet online; despite being a flamenco dance show, it appeared to have a modern twist. Having been here for months without knowing much about contemporary art in Córdoba, it seems to be thriving when you know where to look for it – if only my Spanish were good enough to understand it all. Back at La Plaza de Corredera, a procession of drums entered from one side, leading up to the stage, made up of what seemed to be teenagers in green t-shirts. Over the next few hours there was a covers band, made up only of women. They were full of energy and put on a great show that drew a big crowd.

Overall, I felt very privileged to be able to experience International Women’s Day in another country, and happy that it consisted of so many artistic events, and opened up so many different important conversations.