”I do have a very deep sense of regret that there was a conflict and that people lost their lives, and you know, many were responsible for that – and a lot of them wear pinstripe suits in London today.”

On January 30th, 1972, 13 people were shot dead by the British Army on the streets of Derry – a city that was, and to this day still is, a part of the United Kingdom. The crime for which these 13 people were murdered by the British state was marching through their hometown to demand an end to internment without trial for suspected members of the Provisional Irish Republican Army in Northern Ireland. Those interned were subject to torture as part of their detention. Bloody Sunday, as it came to be known, took place just one year after the Ballymurphy Massacre, where 11 people were killed across 3 days in Belfast.

In the mid 1960s, a Civil Rights movement emerged in Northern Ireland, demanding an end to policies and practices which entrenched Catholics as second class citizens. Campaigns and civil society organisations emerged. They demanded an end to discrimination in employment and housing; an end to the extensive gerrymandering of elections which guaranteed protestant and Unionist government across the six counties; and for extensive reform of the Royal Ulster Constabulary, an inherently sectarian police force designed to uphold and preserve the status quo of protestant “Ulster”. It was members of this movement that were shot on the streets of Derry in 1972.

The list of atrocities committed by the British in Ireland is as extensive as it is stark.

Bloody Sunday and the Ballymurphy Massacre were the violent and military culmination of a long running political, social and economic oppression of Catholics within the six counties of Ireland that were kept under British rule when Ireland was partitioned in 1921, and of Catholic resistance to that oppression. That resistance was built against a backdrop of centuries of violence from the British state throughout the island of Ireland: civilian massacres enacted by Cromwell’s Roundheads, the British’s allowance and exacerbation of the Potato Famine which cost 1 million lives, and suppression of Irish campaigns for home rule – including in the Easter Rising where dozens were shot or executed for their participation. The list of atrocities committed by the British in Ireland is as extensive as it is stark.

Martin McGuinness, the former Deputy First Minister of Northern Ireland, political figurehead of Sinn Féin and Republican advocate for a United Ireland passed away yesterday. Much of what will be written in the coming weeks about his life and his role in the politics of the island of Ireland will be divorced of the context above. Without this, without even this sweeping overview of history, without touching upon the horrors and brutalities of the past, it is impossible to even begin to piece together an understanding of the complexities of the contemporary political landscape in Northern Ireland, and impossible to ascribe assessment of its major actors. 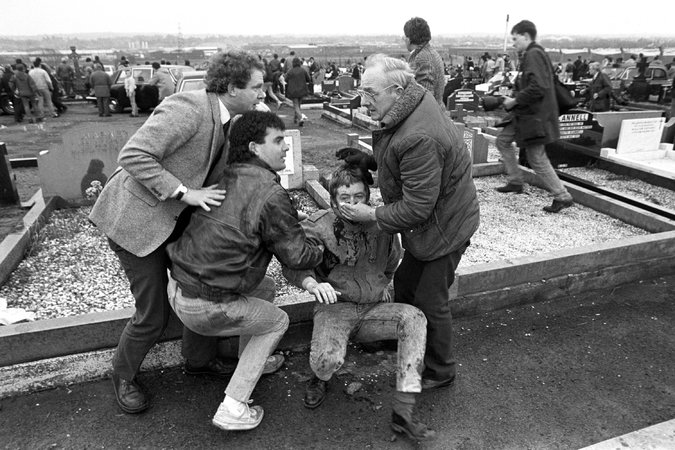 Much has been made and continues to be made of McGuinness’ involvement and background in the Provisional IRA – the paramilitary organisation that was the Primary Republican combatant during the Troubles. During the 1970s, and as blood stained the pavements of Derry at the hands of the Parachute Regiment on Bloody Sunday, McGuinness was, by his own admission, second in command of the Derry Brigade of the IRA. From 1969 until the IRA’s ceasefire in 1997, it is estimated that almost 2,000 people were killed by the IRA’s activities, including up to 700 civilians. For many on the British mainland, the Provisional IRA and Martin McGuinness by association will forever be synonymous with terrorism.

Northern Ireland politics is awash with acronyms. On the British mainland, there is one and one alone that is widely understood and recognised: IRA. DUP, UVF, UDA, UUP, RUC, INLA, SDLP, TUV, PUP are an alphabet soup of meaninglessness. For my generation – as someone born just six years before the Good Friday Agreement was signed – this disconnect with the full picture of the history and violence in Northern Ireland is yet more accentuated. Few would be readily able to tell you that as important a starting point of the troubles as Bloody Sunday was the formation of  the Ulster Volunteer Force in 1966 and the subsequent sectarian violence enacted by this new loyalist paramilitary against Catholics in Shankill. Fewer still would be able to tell you that loyalist paramilitaries were responsible for over 1,000 deaths throughout the troubles, over 85% of which were civilian deaths. When another giant of Northern Irish politics, Ian Paisley, passed away in 2014,few would know that he had himself been involved in the establishment of loyalist paramilitaries – Ulster Resistance in 1986 in addition to the UVF, if they noticed his passing at all.

For many on the British mainland, the Provisional IRA and Martin McGuinness by association will forever be synonymous with terrorism.

Understanding this is as crucial as understanding the historical context of Ireland. The intentional erasure and selective rewriting of aspects of history from popular discourse is a tool of the powerful in all areas of life. The collective amnesia around the role of the British Army, of the Royal Ulster Constabulary, of loyalist paramilitaries and unionist politicians, means that McGuinness will for many, for a long time be dismissed as a terrorist, beyond the pale, unworthy of any other appraisal.

Martin McGuinness lived far more complex a life than this though. In the 1980s, he was central to the shift towards the radical Republican movement adopting the strategy of the ‘armalite and the ballot box’ to achieve a United Ireland, wherein which the Provisional IRA would continue their armed struggle and Sinn Féin would stand in, and in many cases win, elections. The reshaped strategy, triggered by the death of Bobby Sands on hunger strike while a sitting member of the UK Parliament, led to the point where Sinn Féin has become the largest political party, by number of votes cast across the island of Ireland.

Having established Sinn Féin as a major, mainstream, political force, McGuinness went on to play a crucial role in devising what is the current political framework of the six counties. After decades of violence, after decades of sectarian killings, after decades of immovable opinions and irreconcilable communities, the Good Friday Agreement brought about the negotiated political settlement between unionist and nationalist communities that instigated power sharing government. Riddled with compromise, the agreement would never have been reached without the involvement of McGuinness – the pivotal negotiator, who was able to guarantee the IRA’s ceasefire and carry the Republican community behind the agreement. McGuinness entered government in Stormont, first with the Ulster Unionist Party, and then with the party of staunch loyalism, the Democratic Unionist Party, demonstrating an ability to overcome sectarian and political differences, while never once flinching from his position that one day Ireland should be United.

What was unthinkable was achieved, in large part due to the late Martin McGuinness.

In 1998, Gerry Adams referred to the armed campaign in Northern Ireland as being the first phase of the struggle for a United Ireland, with the second phase being the power sharing model of government established through the Good Friday Agreement. Martin McGuinness was inextricably linked to both of those phases – with his time in the Provisional IRA and pioneering the armalite and ballot box strategy, and later in his role as Deputy First Minister in government.

In his final weeks, perhaps unwittingly, perhaps as ever the tactical mastermind, McGuinness may well have initiated a third, unknown phase. His resignation earlier this year due to the corruption and political arrogance of the DUP triggered a Northern Irish Assembly election which led to more nationalist than unionist assembly members sitting in Stormont for the first time in the body’s history. Just 5 days remain for the political parties in Northern Ireland to agree a new cross-community government, or else face fresh elections or direct rule from London. We are entering uncharted territory once again.

A new generation will be responsible for entering that new phase of the struggle. Michelle O’Neill, Sinn Féin’s new leader in Northern Ireland was born in 1977, five years after Bloody Sunday. At uncertain times in the political trajectory of the island of Ireland, in 2017, it is still the actions of Martin McGuinness which are at the heart of that future.

in 2017, it is still the actions of Martin McGuinness which are at the heart of that future.

When – not if – the British are forced to end their occupation and rule of the six counties leading to a United Ireland, there will be many people who will be remembered as being integral to the process, as being key to the liberation of Ireland from British rule. James Connolly, Gerry Adams, Bobby Sands, the martyred H-block hunger strikers, the ‘cutting edge of the IRA’, those executed at the Easter Rising, those shot on the streets of Derry in January 1972, the marchers who fought for civil rights, those who have voted for Parties that support a United Ireland and many, many more.