Okay, I’m not writing another article to bait angry American conservative shitheads. That was funny, don’t get me wrong. I could have got a whole article called: ‘101 talking points for miserable dickheads’ out of it. (For more details, see my Nazi-Punching guide to kicking the Alt-Right in the teeth and my general reasoning for violence against people who advocate genocide, and its gloriously rage-filled comment section.)

But enough baiting easily-baited term-searching nationalist wankers. Let’s be more international and talk about another democratic nation with severe racial tensions, corruption problems and an unpopular leader accused of incompetence: South Africa. On February 9th, Zuma gave the traditional State of the Nation Address of the President of South Africa (SONA, for short) to the parliament. 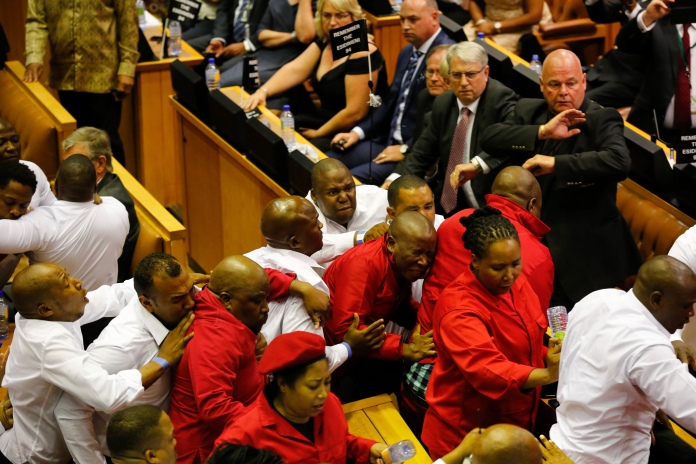 TL;DR: The men and women in red are members of the anti-capitalist, Marxist-Leninist Economic Freedom Fighters party (EFF), winners of third place in the last elections. The people in white are parliamentary security, a force who in 2015 operated disguised as waiters and this year had the backing of four hundred members of the SANDF (South African National Defence Force). The troops were arguably necessary – supporters of both the ruling ANC party and the EFF (and the second-ranked Democratic Alliance party, and the more general opposition) were rioting outside the parliament building as Zuma tried to start his speech.

When he finally began speaking, the EFF had been ejected and the DA had walked out after them, leaving Zuma to speak to his own party and a few other opposition and independent members while the opposition gave their own speeches outside. The EFF have disrupted the State of the Nation before with chanting and jeering – this year’s effort is their greatest act of political theatre yet, and the phalanxes of security guards didn’t stop their ejection from becoming the main story of the address. Jacob Zuma himself didn’t seem surprised or rattled by the violence, although his speech was 78 minutes late and went on until ten at night. The subsequent debates have gotten quite heated.

This year’s effort is their greatest act of political theatre yet, and the phalanxes of security guards didn’t stop their ejection from becoming the main story of the address.

Zuma’s ANC government is, as you might expect from all this, not popular. South Africa’s economy has been in rocky waters for a while, much like many others, and the country has been rocked by scandals and allegations of corruption. Guptagate, a scandal involving a family of Indian billionaires who have interests all over South Africa and have employed three of Zuma’s relatives, refuses to go away, and has provided plenty of firepower for Zuma’s political opponents. The South African government recently saw three finance ministers in a week, a move that made the Rand do its very best impression of the Pound Sterling post-Brexit (For a non-political version of that analogy, try: ‘It’s very best impression of Slim Pickens at the end of Dr Strangelove’). Zuma has been accused of a laundry list of corruption and embezzlement offenses and launched heavy-handed crackdowns on critics and satirists. Eskom, the state-run energy utility, has become a byword for bureaucracy and incompetent management, while the government signs an extremely controversial nuclear deal with Russia.

Even Mr Zuma’s generally positive address on the state of the nation couldn’t escape the more depressing aspects of South Africa’s current situation – after 23 years of Apartheid-free government, the Black Economic Empowerment programmes intended to racially balance the economy are still far from complete.

‘Twenty two years into our freedom and democracy, the majority of black people are still economically disempowered. They are dissatisfied with the economic gains from liberation… White households earn at least five times more than black households… only ten per cent of the top one hundred companies on the Johannesburg Stock Exchange are owned by black South Africans,’ Zuma stated.

Institutional sexism is also rife, alongside the racial inequality, with women making up only 32.4% of the senior management in the country.

the Black Economic Empowerment programmes intended to racially balance the economy are still far from complete.

To counter this, Zuma promised radical economic transformation, derided by critics as typical ANC-speak – meaningless, without concrete plans and liable to be undermined by the corruption that plagues South Africa as it plagues so many others.

Interestingly, Zuma did find time in his speech to specifically affirm the ‘One China’ policy, the mainland Chinese government’s claim over the Republic of China on Taiwan, before praising Chinese trade and investment. It’s hard not to read this as both a deliberate dig at Donald Trump’s so far so frosty relationship with the PRC and a tacit declaration of which side South Africa intends to be on when disputes between the world’s two superpowers arise.

Ultimately, the 2017 SONA was just another argumentative incident in an increasingly troubled nation’s politics. Jacob Zuma and the ANC have survived scandal after scandal, weathered economic crises and corruption charges and shaped South Africa in the 21st century. But with opposition MPs dominating coverage of parliament, how much longer can they hold onto power?