Last week, 322 MPs voted against an amendment that would have assured the rights of the three million European migrants that live in the UK to remain here after Brexit. Of these three million people, roughly 6 percent are EU students. And for a majority of those, these are times of uncertainty and anxiety. Those 322 MPs, including three from Labour, have sent a clear message to EU students who want to remain in this country: you are just bargaining chips in the Brexit negotiations over the next two years.

After the referendum, universities minister Jo Johnson guaranteed that current EU students will continue to receive student loans for the current academic year, allowing for many more students to come and study in the UK. It is also very likely that the loans will still be available right up until the UK finally leaves the EU at some point in 2019, which will allow many to complete their degrees. But the vote last week confirmed a frightening truth. These students are in the dark about what they can expect from life when they finish their courses, and no-one knows when that will change. Admittedly, this is partially true for all students, but at least most native students can be confident that they will have a place to call home, and will have opportunities to (eventually) find some form of paid work. At many universities up and down the country, the most EU students have been told is that they will have to wait and see what will happen as the negotiations go on. This is not good enough.

People deserve to be able to learn about their rights on a free and fair basis, in a place where there feel welcome and at home

As with so many of this government’s policies, people from non-rich backgrounds are set to suffer more from this approach to Brexit. To claim permanent residency, EU students are required to either be under the incredible time pressure of working 20+ hours a week alongside their studies, or to have used private health care for the entirety of their time as a student. The get-in clause, it seems, is ‘be wealthy’.

Many students will be unaware of their rights and of what their next steps should be to give themselves the best chance of remaining in the UK post-2019. If support is not available from their university, it falls on them to make the gargantuan time commitment of doing the research themselves, or to seek legal advice. In Norwich, obtaining legal immigration advice costs around £80-100 per visit. That’s a huge chunk out of most student budgets – unmanageable for many.

Whilst the number of EU students has steadily grown over the years, the support provided for them by universities has not. Most institutions have already promised to stick up for the rights of their European students, but they must do this through practical action as well as lobbying. We need to see universities and student unions offering legal advice. People deserve to be able to learn about their rights on a free and fair basis, in a place where there feel welcome and at home. They deserve to be reassured that there are ways to reaffirm their right to remain in the country that they live and study in, a place that many of them now call home. 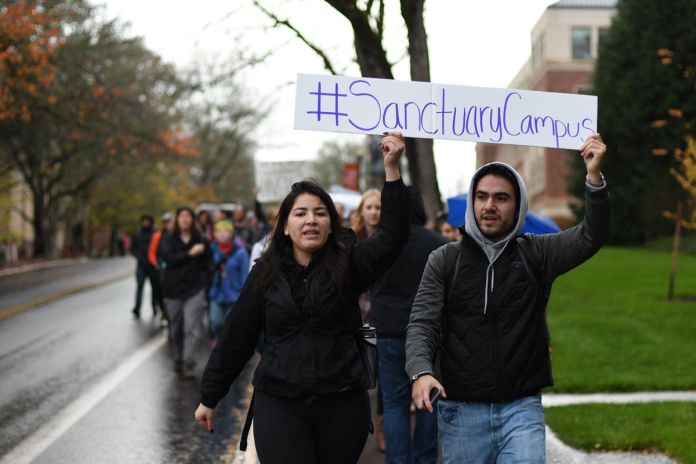 Sure, there are upfront costs to providing such a service, but if you want to talk economics, consider the costs of not doing so. Universities stand to lose far more money if EU students choose to leave their courses early due to the uncertainty that can be mitigated by a support structure in place on their campus.

In the US these structures have already been introduced in sanctuary campuses for migrants and refugees who have come under attack after the election of President Drumpf and his motley crew. Sadly, we don’t yet have anything like these in the UK, but there’s never been a better time to get them going, and truly make our universities into the progressive and internationalist spaces they claim to be.

In the meantime, we can all act in solidarity with those on the receiving end of the ‘bargaining chip’ argument. For this reason (and many more), I will be striking and marching on Monday at UEA as part of One Day Without Us. The national day of action will show the contribution that EU migrants make to our campuses and to society more broadly, by demonstrating what things would be like without them. Find out more about the campaign at UEA here.

2 thoughts on “NOT YOUR FUCKING BARGAINING CHIP”