Yesterday was the International Human Rights Day, a brief moment when the world recognises and remembers the value and history of human rights. A central element to the United Nations Universal Declaration of Human Rights — the founding document of contemporary human rights legislation and protection — are the rights of workers. Article 20 of the declaration enshrines the right to freedom of association — the right to join and form trades unions. Trade union rights are further guaranteed through Article 23, which also recognises the right to free choice of employment, fair and favourable working conditions, protection against unemployment, equal pay for equal work and fair remuneration for an individual’s labour.

Traditional narratives around human rights are that they are a result of the work of international declarations, legislative frameworks and statesmanlike politicians. Unsurprisingly, none of these are true. It’s important to acknowledge that human rights, and particularly the rights of workers, have rarely been gifted to us through benevolent leaders. Rather, they have been won after long fought battles and collective struggle.

human rights, and particularly the rights of workers, have rarely been gifted to us through benevolent leaders

In the UK, the right to freedom of association didn’t come about through friendly political leaders or international negotiators — it came through the long battle of working people collaborating to fight for their right to collaborate in the first place. From the Tolpuddle Martyrs and the Merthyr Rising in the 19th Century through to the Shrewsbury Two and the Pentonville Five in the 1970s, working people have fought hard throughout history for the right to form trade unions and use those unions to push for fairer pay and conditions, and to defend that right when there have been attacks from government. 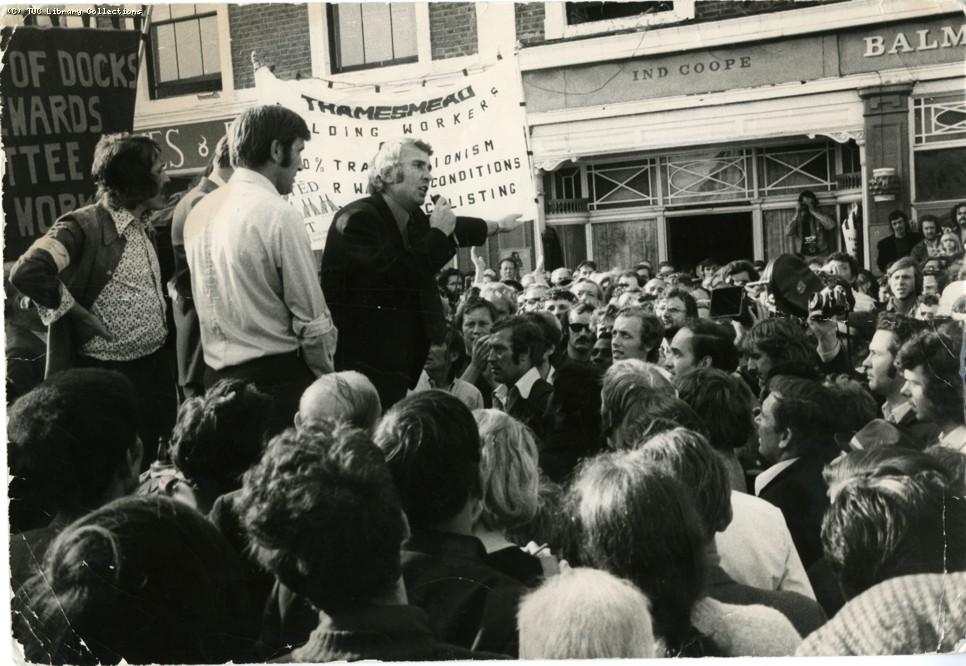 (Release of the Pentonville Five, 1973, via unionhistory)

Similarly, the right to equal pay for equal work was won through protracted struggle from women workers, as well as from the trade union movement more broadly, and came to a head in 1968 when machinists at a Ford production plant in Dagenham went on strike to protest the inequality in pay between themselves and their colleagues who were men. The strike sparked the Labour Employment Minister, Barbara Castle, to bring the Equal Pay Act to parliament.

Although the gender pay gap currently stands at an eye-watering 20% when including part-time work, and while there are continuing problems with enforcement to this day, the 1970 Equal Pay Act was the first piece of legislation in the UK which required employers to pay men and women an equal wage for equivalent work. Without the collective fight of women workers for many years, the right to equal pay for equal work would not have been won, and the financial battles still being fought to this day — such as the Asda staff who are set to receive up to £100 million in back pay due to equal pay legislation — couldn’t have been fought.

The 8 hour working day, the right to days of rest at the weekend, the minimum wage, banning of racial discrimination in employment, paid parental leave, the need for employers to abide by contracts, the right to withdraw your labour, collective bargaining agreements and many many more rights we have today exist only because of the campaigning work of trade unions and their members over many years.

Given this, there’s little surprise that the Conservative government has sought to aggressively neuter the trade union movement’s right to organise and campaign on behalf of their members. Britain already has some of the most restrictive anti-trade union laws in Europe, thanks in the most part to the Tory government of the 1980s, but the Trade Union Act passed earlier this year is set only to make that worse.

(A trade union activist protests outside the Houses of Parliament © TUC)

Central provisions of the Act restrict the conditions under which trade unions can organise strike action,  requiring absurd and arbitrary turnout thresholds to be surpassed in the ballot for strikes. In most workplaces, the Act will require at least 50% of members to vote in a ballot in order for a strike to take place, and in ‘important public services’ — teachers, doctors and so on — more than 40% of the eligible members will be required to vote in favour of strike action for it to go ahead. This has been introduced while continuing to require unions to conduct postal ballots on strike action, despite most other organisations in the country moving away from postal ballots due to their notoriety for achieving lower turnouts and for being far less efficient and effective than other, typically digital means.

in ‘important public services’ — teachers, doctors and so on — more than 40% of the eligible members will be required to vote in favour of strike action for it to go ahead

Freedom of association is the single most important workers’ right that we have. It operates as the gateway to so many other rights. The longer we allow the Trade Union Act and the countless other restrictions on trade union rights, to remain on the statute books, the harder it will be for us to resist governments of all colours and company bosses who wish to undermine and erode the existing rights at work we have. That’s without even starting on the fight for the extension of our existing rights.

As discussed above, Article 23 of the UNDHR sets out protection against unemployment and fair remuneration for labour as basic human rights. As employers have moved towards increasing flexiblisation of the workforce through contracts that have zero hours written into them, or that are rolling and temporary, how protected do you feel against unemployment? Despite the government’s shameless attempts at rebranding the minimum wage, over 5 million people still earn less than the Living Wage. With that in mind, does it sound like we’ve reached a point where the right to fair remuneration for labour has been achieved as a universal right?

So, in the aftermath of Human Rights Day, let’s remember the struggles that have been fought for us by working people and the trade union movement in the past. And let’s remember that struggle continues, and there is still much to fight for and much still to defend. If you aren’t already a member, join a trade union and come together as part of the international and historical movement for workers’ rights all around the world. There is power in a union.