A decade and a half into the 21st century, many believe that the metamorphosis of student into consumer is complete. The student activist and the radical student movement are consigned to history. Despite the hiccup of the anti-fees protests in 2010, the modern student is more concerned with getting their money’s worth in education than they are about changing the world.

So some would have you think. Over the two years since the last instalment of this series, the student movement has grown further in depth, diversity and scope. This series of articles seeks to explore the student campaigns that are redefining our time: what they have achieved, what they mean for the student movement, and their impact on the Higher Education sector as a whole.

This piece is from the committee of UEA Migrant Solidarity Campaign

‘later that night
i held an atlas in my lap
ran my fingers across the whole world
and whispered
where does it hurt?

Warsan Shire, What They did Yesterday Afternoon

Where would you go if living in your home nation became intolerable? If a treatment you needed was only available or affordable in another country; if the state suddenly declared your religion or sexuality unlawful; if universities became so underfunded that constant lecturers’ strikes made you turn elsewhere for education; if civil order crumbled during  a violent regime change – what would you do? Imagine how unlivable life would have to become to force you to leave your home, your job, your friends, your family.

Imagine if, simply through the chance of being born in a turbulent space within a particular set of borders, you could no longer live where you have become accustomed to living. But neither can you easily access the same opportunities as a citizen in another nation. To do so you must go through arduous, often humiliating and time-consuming processes to provide evidence that you will be an upstanding economic asset for your new domicile. If you do not, you are deemed ‘illegal.’ This is farce, of course – no human is illegal.

Imagine how unlivable life would have to become to force you to leave your home, your job, your friends, your family.

UEA Migrant Solidarity Campaign is a student society supporting those who are subjected to the dehumanisation of absurd border regimes in our globalised, neoliberal, capitalist world. Since its formation, MSC has primarily focused on fundraising and organising collections for the ‘Jungle’ refugee camp in Calais. We have worked with individuals locally to co-ordinate runs to Calais, and have held fundraising events for Calais-based non-profit organisation L’Auberge des Migrants. At present it’s difficult to get a clear picture of the situation in Calais, after the appalling demolition and eviction by French authorities which scattered the communities that had formed around the camp. One in three children from the camp have gone missing as a result. We condemn this callous act and the careless way it was carried out, and we continue monitoring the situation to see how we can offer assistance going forward.

More locally, we have been fundraising for a Norwich-based group, Phone Credit for Refugees and Displaced Peoples, which provides users with the materials needed to make contact with friends, relatives and service providers. Services like this are incredibly important for preserving the well-being, safety and immediate physical needs of migrants. We are also proud to have been helping a Syrian UEA masters graduate, Enana Assaf, to crowd-fund the fees for her cancer research PhD at UEA. Enana is a refugee from Aleppo who studied her first degree amid the growing conflict, taking exams while bombs fell on her city. Her house and the pharmacy where she worked were destroyed, and she now lives in Norwich with her husband. We do not believe that Enana, refugees and migrants like her, or anyone else should be denied educational opportunities by the state because of their financial situation. This conviction also led us to run a successful petition requesting that the university grant Article 26 scholarships to five Syrian refugees.

Providing material assistance to those in need is important, but it is not the only way to combat structural injustice. The bigger, more difficult fight is trying to force political change through awareness-raising, campaigning, demonstrating and direct action. We are affiliated with People & Planet’s Undoing Borders campaign, which aims to fight for the ‘full political, social and economic rights of migrants, and for a borderless world.’ At present the campaign is primarily focusing on racist, xenophobic and Islamophobic media propaganda, one of the most insidious symptoms of a world divided by borders. We hosted an introductory Undoing Borders workshop and took part in the national day of action against Specsavers, one of the biggest advertisers in the most anti-migrant UK newspaper, the Daily Express. The misleading narratives presented in papers like the Express justify anti-immigrant policy, inflame public opinion and behaviour, and make migrants into scapegoats for low employment, stagnant wages, high poverty rates, housing crises and the failings of the welfare system. Campaigns like Undoing Borders are showing corporations how damaging it can be for their reputations to be associated with this disgusting behaviour, and have already won commitments to withdraw support from companies including Lego.

We are also involved with the Movement for Justice by Any Means Necessary, an anti-racist, anti-sexist movement organising against oppressive and exploitative ideologies, groups and authorities in the UK. We had a fantastic workshop with them recently at UEA, hearing about the campaign from two incredibly determined and energetic organisers, one of whom is a former detainee of the infamous Yarl’s Wood Immigration Removal Centre. The Movement’s main focus is the Yarl’s Wood #ShutItDown campaign, which extends solidarity to the migrant women detained without charge or sentence inside the centre under appalling conditions. The Movement holds regular demos outside Yarl’s Wood in collaboration with the women inside, and determinedly advocates for the detainees’ rights across many platforms. The detainees demand their freedom, an end to all migrant detention and deportations, the restoration of their rights to legal representation, free speech, expression, organisation and privacy, and an end to the racist police-state. This Saturday December 3rd UEA MSC will be joining Movement for Justice groups from all over the country to demonstrate outside Yarl’s Wood, vocally and visually expressing our solidarity with these women on the front lines of the conflict that the borders of modern capitalism create. 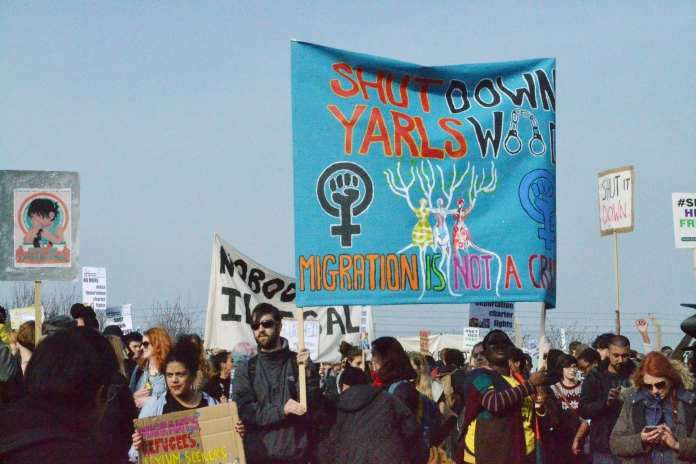 In the near future, we intend to continue fundraising, campaigning, organising and collaborating with other student groups, such as the UEA Womanist and Feminist societies. We are particularly excited about the One Day Without Us national day of action in February, and are always looking for other actions, movements and groups to get involved with on- and off-campus, locally, nationally, and internationally.

Taking on the border regimes of the world is an incredibly difficult task, and as with so many political struggles can feel like trying to fix cracks that are opening as fast as you can seal them up. We do not imagine that we as a student society are about to single-handedly dismantle the geographical and psychological borders of the world from our own quiet, remote corner of it, but we know that we are players in an international web of movements fighting against the injustices we see. We need people to form a united front against the alarming rise of far-right ideologies across the globe right now. The left has floundered, and in the wake of this failure right-wingers have provided easy answers to socioeconomic anxieties. The likes of Thomas Mair, Richard Spencer and Marine Le Pen believe their time has come. We must be stand up in compassion and solidarity to stop them. MSC is proud to play a part, such as we can, in this wider struggle against global oppression, repression and exploitation.