(Note: The below is based on an actual statement released by the Home Office, which can be found in its unadulterated version here. The adulterator takes no responsibility for the government seeing that you’ve visited this web page, even though they will)

The Investigatory Powers Act dramatically increases transparency around the use of investigatory powers by making it so we can see everything. It protects both privacy and security for MPs only and underwent an unprecedentedly low level of scrutiny before becoming law because everyone was distracted with Brexit.

The Government is clear that, at a time of heightened security threat (Current threat level: Be Very Afraid, Trust Us. We Won’t Tell You Why), it is essential our law enforcement, security and intelligence services have the powers they need to keep people safe. And the powers they need to see what you’ve been doing on the internet even if you aren’t a criminal. Maybe you’re buying them Christmas presents but they hate surprises. Have you thought of that?

The Investigatory Powers Act transforms the law relating to the use and oversight of Investigatory powers into a much worse law that basically raises a middle finger to your privacy because fuck you. It strengthens safeguards protecting MPs and no-one else and introduces world-leading oversight arrangements that are making the North Korean, Chinese, and Syrian governments very jealous.

The Act does three key things. First, it brings together powers already available to law enforcement and the security and intelligence agencies to obtain communications and data about communications. It makes these powers legal to use despite the fact they go against many of our country’s values and beliefs – and remove or obfuscate the safeguards that apply to them. I want to make it clear and understandable that we don’t give a fuck what you think, unless you’re thinking of doing something on the internet we don’t like.

Second, it radically overhauls the way these powers are authorised and overseen by making sure anyone in a stupidly long list of departments can see them. The Fire Service can see your porn habits now. We don’t know why. It introduces a ‘double-lock’ for the most intrusive powers, which we’re calling them now because as previously mentioned we don’t give a fuck, so warrants require the approval of a Judicial Commissioner, and Judicial Commissioners are entirely apolitical, infallible authorities who will never be susceptible to being bribed or threatened into letting us do whatever the fuck we want. It also creates a powerful new Investigatory Powers Commissioner to oversee how these powers are used, who will take a thousand years to deal with any individual case in order to make sure you’re thoroughly bored of the whole thing by the time the option comes up to do something about it. 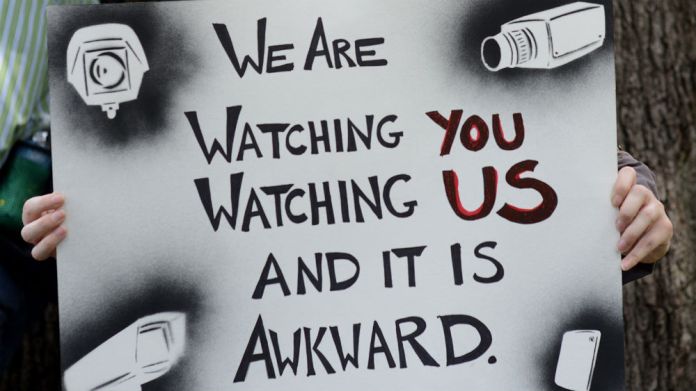 Third, it ensures powers are fit for the digital age, or at least we think they are although we still use the phrase ‘digital age’ like it’s 1997. The Act makes a single new provision for the retention of internet connection records in order for law enforcement to identify the communications service to which a device has connected, along with a number of other provisions we’re hoping will slip through unnoticed.

This will restore capabilities that have been lost as a result of changes in the way people communicate. What the fuck does this sentence mean? Does it mean that our old surveillance methods of ‘hiding behind a newspaper with eyeholes cut in it’ aren’t working anymore and we want that back, or is it a broader luddite swipe at the kids and their newfangled ‘Twitter?’

The bill was reviewed by a collection of spooks and authority fetishists, and surprise surprise all three of those authoritative independent reports drooled over the idea of being able to access all the data anywhere in the UK, unless it’s hidden behind a number of fairly simple measures (What’s a VPN?) that they either haven’t considered or will be making illegal later at a huge cost to many legitimate businesses that use them for other purposes.

A revised Bill was introduced in the House of Commons on 1 March, and completed its passage on 16 November, meeting the timetable for legislation set by Parliament during the passage of the Data Retention and Investigatory Powers Act 2014. Over 1,700 amendments to the Bill were tabled and debated during this time, but some people in government <cough ‘May’ cough> were so desperate to be able to see every little thing you do online and intrude into your personal life that they basically hammered it through without changing it at all, and occasionally making it worse.

The Government has adopted an open and consultative approach throughout the passage of this legislation, hence this immensely patronising statement, tabling or accepting a significant number of amendments in both Houses of Parliament in order to improve transparency and strengthen privacy protections for MPs and members of government. These included enhanced protections for trade unions and journalistic and legally privileged material, in theory. In practice, of course, a mixture of human nature and the intrusive nature of the law itself mean that these protections are so much waffle on the breeze and the government has carte blanche to blackmail and spy on anyone it feels like.

We say we’ve introduced a threshold to ensure internet connection records cannot be used to investigate minor crimes, because we don’t care that we’re sliding down the slippery slope at high speed because at the bottom is the regimented fascist dystopia that we secretly dream of every night. We don’t care or understand that this bill puts the browsing data of every citizen of this country at risk of being stolen and used against them and we don’t understand how human nature works so we’re going to ignore the myriad possibilities of this law and focus on the next one, which will probably be aimed at finally doing something about the gays.

The Government has placed privacy at the heart of the Investigatory Powers Act. Look at that sentence. See how good we are at this shit? Look at that sentence! It’s a work of surrealist Newspeak art! War is peace! Freedom is slavery! Ignorance is strength! The Act makes clear the extent to which investigatory powers may be used and the strict safeguards will be washed away like so much flotsam on the tide of incoming hackers and members of the government and security services mis-using it.

A new overarching ‘privacy clause’ was added to make absolutely clear that the protection of privacy is at the heart of this legislation. We can write sentences like this all day. This privacy clause ensures that in each and every case a public authority must consider whether less intrusive means could be used, and must have regard to human rights and the particular sensitivity of certain information. This authority is apparently some kind of higher power that’s never going to have a bad day or discover their ex-wife is the subject of an investigation, because apparently we have one of those. GCHQ and the NSA have been caught downloading pictures of people they’re spying on naked, for fuck’s sake. The powers can only be exercised when it is necessary and proportionate to do so, and the Act includes tough sanctions – including the creation of new criminal offences – for those misusing the powers. Yeah, create more criminal offences. That’ll show ‘em. We’re a conservative government. We think creating more laws stops crime.

The safeguards in this Act reflect the UK’s international reputation for protecting human rights. I can’t even make tired George Orwell jokes anymore. The unprecedented transparency and the new safeguards – including the ‘double lock’ for the most sensitive powers – set an international benchmark for how the law can destroy both privacy and security for everyone, no matter who they are (unless they’re an MP).