Today in international relations we are witnessing a return to a new Cold War between Russia and the West. However, this Cold War Mark II is avoidable, and has only been institutionalised by the actions of both the West and Russia to antagonise one another, and rejuvenate the old Cold War which ceased since the collapse of the Soviet Union. Now in the second decade of the 21st Century it is here once again. This new Cold War is characterised by increased tensions between the West and Russia, with rhetoric particularly from the latter becoming increasingly aggressive, and the use of economic measures such as sanctions against Russia by Western powers.

The recent Russian bombardment of the besieged Syrian city of Aleppo has done nothing to ameliorate the current diplomatic tensions, only deepened it. However two important qualifications need to be made about this new Cold War that makes it different to the Cold War of the 20th Century.

Under the Presidency of Barack Obama, the United States is no longer a sole superpower, and although it has enormous military capabilities it is unable to translate its material advantage into preferred political outcomes. Russia’s power — in terms of its military build-up, based upon increased defence expenditure and also increased military presence in the Middle East in Syria — under the leadership of Vladimir Putin has increased. It has not achieved this level of political and military power since the days of the Soviet Union.

It has not achieved this level of political and military power since the days of the Soviet Union.

From Russia’s perspective NATO expansionism and West’s intervention in Syria has threatened their perceived strategic interests. Putin has also recently commented that the collapse of the Soviet Union was “the greatest geopolitical catastrophe” in history.

In addition, Russia has adopted a more muscular foreign policy, threatening its neighbours in Ukraine, and fighting a war with the former Soviet republic of Georgia in 2008. More recently, in 2014, Russia annexed Crimea which led to widespread condemnation by the West with the use of economic sanctions to punish Russia for this behaviour. However, this Cold War is different to the one of the 20th Century — it isn’t marked by ideological struggle. It is not Liberal Capitalism versus Marxism-Leninism. The politics of this new Cold War? It’s all about power, and national interest. 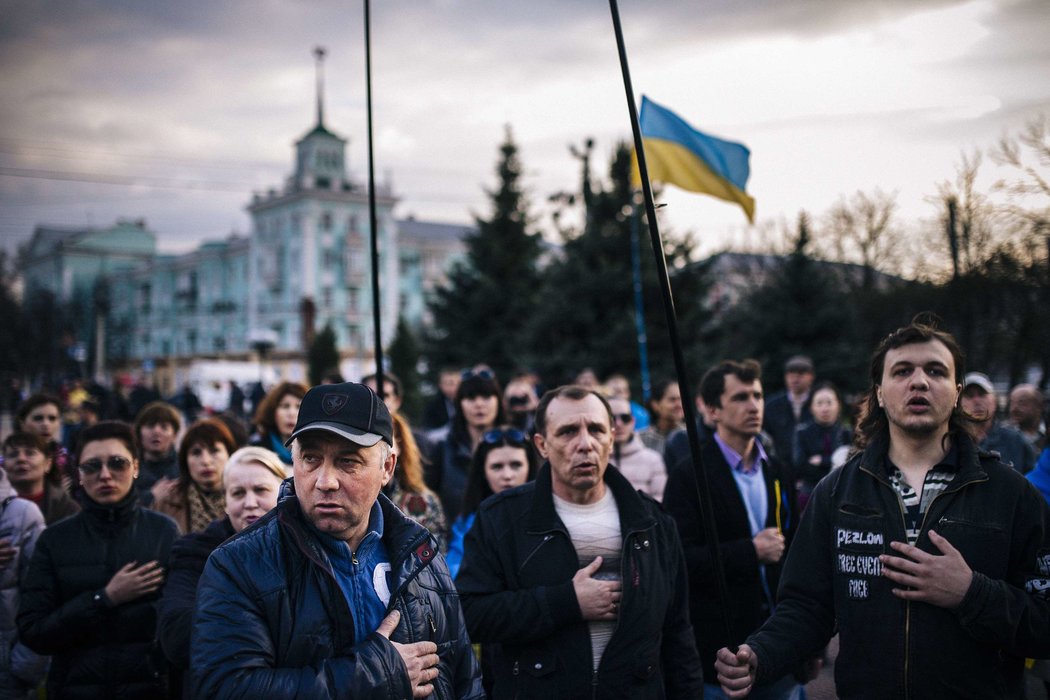 (Singing the national anthem at a pro-Ukrainian rally in eastern Luhansk, where ethnic Russians are the majority, 2014. © Dimitar Dilkoff/Agence France-Presse — Getty Images)

The recent interventions by both the West — such as US, France and UK — and also Russia, in Syria, is emblematic of this wider geopolitical struggle. Russia’s actions in its military campaign in Syria — propping up its Soviet-era ally the Syrian Bashar al-Assad, Baathist Party Government, by helping Assad’s forces besiege the city of Aleppo — has caused international condemnation, particularly from the West.

The West is not without criticism and NATO expansion into the Baltic States and Eastern Europe has made post-Soviet Russia perceive a threat to its periphery. If history has taught us anything, it is that Russia perceives a buffer between the West and its own sphere of influence to be within its own national security with 28 member states. Not to mention the domestic interference the West has shown in relation to Ukraine, in the civil war there, by providing economic and military assistance to the Ukrainian regime.

The recent interventions by both the West […]  and also Russia, in Syria, is emblematic of this wider geopolitical struggle.

Vladimir Putin gave a speech expressing such logic: “They lied to us many times, made decisions behind our backs… This happened with Nato’s expansion to the east, as well as the deployment of military infrastructure at our borders”.

Furthermore, NATO is having a crisis of identity with the wars ending in Afghanistan. Therefore it is suffering from a threat deficit. So in accordance to security logic, it needs to project a threat towards a so called ‘other’. In this case a resurgent Russia to legitimate its own international legitimacy and that of the member states.

(Impact of bombs in Aleppo via German Center for Eurasian Studies, ‘Aleppo: The Leningrad of Syria‘ – by Kevork Almassian)

In addition, what is more of a concern, and has a more disastrous implication for international security, is the sabre rattling between Russia and the United States concerning nuclear weapons. Both powers have stockpiles of thousands of nuclear weapons and some of them are contained within aging delivery mechanisms. These weapons either need to be dismantled or upgraded. Both Barack Obama and Vladimir Putin are pursuing a policy of upgrading their nuclear weapons capability. US Defence Spending “peaked in the fiscal year 2010 at almost $700 billion”, while Russia back in 2010 planned for a 20 trillion rubbles defence spending programme, in order to achieve once held ‘Great power’ status it has sought since the collapse of the Soviet Union.

Both powers have stockpiles of thousands of nuclear weapons and some of them are contained within aging delivery mechanisms.

John Mearsheimer, in the book The Tragedy of Great Power Politics (2001), argues that Regional Hegemons are not satisfied with their own security in the region and want to project their power and influence globally. Both the United States and Russia are behaving in accordance to this logic in the Middle East with Syria being the proxy conflict in which both are locked in a geopolitical game of chess.

What is needed is a new rapprochement with relations between the US-led Western alliance and Russia, with the new US Presidential Administration in 2017 seeking to usher in a period of ‘normalisation’ of relations, commitment to ending the conflict in Syria, and also set clear limits on NATO military intentions, as well as Russian action within its peripheral. Perhaps then, we will see a more desecuritization of the ‘other’, and a move towards more peaceful relations.

One thought on “COLD WAR MARK II: UNNECESSARY, AVOIDABLE, AND A CHALLENGE TO INTERNATIONAL SECURITY”