Since coming to power under the coalition in 2010, the Tories have repeatedly paid lip service to the principles of democracy. David Cameron’s concept of the ‘big society’ was outlined in democratic terms, where local communities would be empowered to have control over public services and community projects. ‘Localism’ and rhetoric around extending local democracy were key components of both the 2010 and 2015 Conservative Party General Election platforms.

Ultimately though, the reality is far from the picture Conservative ministers and strategists are painting. Through Cameron to May, the Tories have repeatedly undermined democracy in Britain and we are far worse off as a result. Here are just seven of the many ways they have done this.

There are currently 651 MPs in Parliament, each with a constituency varying in geographical size and population. Over time, demographic change skews the make-up of parliamentary constituencies as some areas see population decline and others see increases, requiring the boundaries to be redrawn to address the emerging variation.

In response to this, the Tories have proposed reducing the number of MPs to 600, and have, through the boundary commission, produced a suggested map of new constituencies. This in itself would not necessarily be a problem.

However, the review calculated the new size of constituencies based on voter registration data. Significantly fewer people are registered to vote in the UK than actually live in it. We know that working class people, BAME people, students, and younger people are less likely to be on the electoral register for all manner of reasons, so areas of the country with higher numbers of these people end up having less representation.

Not only that, but the data used was taken from December 2015. An additional 2.5 million people were added onto the electoral register by the time of the EU referendum, further increasing the arbitrary and inadequate nature of the process. Unsurprisingly, Labour are set to lose over twice as many seats as the Tories under the proposals.

Democracy, as the cliché goes, is far more than placing a cross in a box once every five years. Real democracy should exist between elections, be embedded within communities and requires an active civil society. Citizens, independently and through organisations, need to be able to hold their elected representatives to account and campaign for political change outside of the electoral cycle.

Democracy, as the cliché goes, is far more than placing a cross in a box once every five years.

In 2014, the Tories began to erode these principles through legislation. The Transparency of Lobbying, Non-Party Campaigning and Trade Union Adminstration Act, or the Gagging Law – as it became more appropriately termed by opponents – places aggressive restrictions on the ability of charities, community groups, and Trade Unions to campaign on political issues in the run up to a General Election. In doing so, the Act ensures political debate is almost the sole preserve of political parties and the media, diminishes the ability for Governments to be held to account, or for new policy proposals to enter the debate.

Opposition parties in parliament receive ‘short money’ – funding which is designed to allow these parties to staff their offices, cover travel expenses and the cost of other parliamentary duties. In essence, short money is a recognition that Governments have a significant political advantage relative to opposition parties given the power, influence, and most importantly, resources that come with holding office. 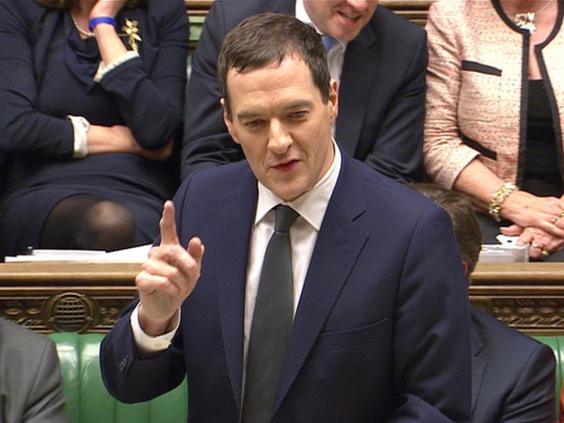 ( George Osborne via The Independent )

In the July 2015 budget, George Osborne made cuts of almost 20% to short money. What reason could a Government have for cutting the funding that is intended to help hold it to account?

For almost two centuries, unions have been central to the health of democracies and to political change, and they provide vital support and protection for people in the workplace. As part of their ability to leverage power over employers and win improvements in pay and conditions, Trade Unions hold the right of their members to collectively withdraw their labour and take strike action.

Restrictions have been placed on Trade Unions before. Margaret Thatcher’s government outlawed secondary action and sympathy strikes as well as restricting the ability of striking workers to picket. John Major’s government required Unions to hold ballots for strike action to take place by post – this has yet to be repealed, in spite of the availability of online ballots. Postal ballots have been abolished by most other organisations, including major political parties, due both to their cost and their lower turnout.

If the Tories were so keen on ensuring democratic legitimacy, would they not seek to also apply such restrictions on the people who are elected to write legislation […] ?

But the 2016 Trade Union Act takes one step further. It places absurd constraints on Unions, by asking turnout requirements on strike ballots. Under the provisions of the legislation, a ballot must have a turnout of at least 50% in order for strike action to take place, and in instances of ‘important public services’ the ballot would also require at least 40% of eligible members to vote in favour, in some cases requiring at least 80% of the vote to be in favour for a strike to be legal. The Act includes teachers, healthcare professionals, firefighters and others under their definition ‘important public services’.

In 2014, the turnout at the European elections was 42%, and local elections often see turnouts under 35%. If the Tories were so keen on ensuring democratic legitimacy, would they not seek to also apply such restrictions on the people who are elected to write legislation, run public services and set rates of taxation, rather than solely to people coming together to struggle for a better lot in life?

For several years, fracking has been a central feature of British political debate, dominating discussions on Britain’s energy future but also on the state of local democracy. Pilot fracking sites have seen widespread protest, from Lancashire to Sussex. Resistance from the local community and climate campaigners led to Lancashire County Council rejecting a fracking application from Cuadrilla.

Despite all the rubric from Tory ministers around localism, the debate has proven that their commitment to its principles is dependent on their agreement with a particular local decision. Local Government Minister Sajid Javid has made this clear in his decision to overturn the decision by the local authority and allow Cuadrilla license to frack on appeal.

The precedent this sets is dangerous. After years of battling to have their concerns listened to by politicians in their area, local residents have had their victory overturned in an instant by a Government that shows little concern for local democracy, and for the need to take action on climate change.

6. Restricting the ability for local councils to make procurement or investment decisions based on ethics

In September 2016, the Government issued guidance on local authority pension fund investment decisions, giving the Secretary of State for Communities and Local Government the power to intervene on local investment decision making. This intervention could be used to overrule investment, or more specifically, divestment decisions made in pursuit of human rights, social justice, or environmental protection. The guidance built on previous statements seeking to put a stop to public procurement boycotts and is intended to dampen the burgeoning movement for boycotts, divestment and sanctions against the state of Israel and companies complicit in Israeli violations of international law.

why should a democratically elected local authority have their legitimate contract or investment choices overturned?

The reasons why this is both undemocratic and absurd barely need stating. Good procurement and investment practices require a range of factors, including ethics, to be taken into account in decision making. Public procurement and investment can be a powerful tool for progressive change. Most importantly though, why should a democratically elected local authority have their legitimate contract or investment choices overturned? The sole intention is to stifle Local Government’s ability to play a role in building a progressive society.

7. Imposing new layers of government on areas that voted against them

2012 saw ten cities hold referenda on whether or not to have directly elected mayors replace council leaders as the political heads of Local Government. Except Bristol, all voted by clear margins against the idea.

Fast forward to 2016 and the Cities and Local Government Devolution Act. The newly elected Tory majority Government legislated to create combined local authorities, covering expansive areas which would be headed up by directly elected mayors, in direct opposition to the decision made by local referenda in many places just four years prior.

Don’t like the result of a referendum? Change the terms of reference ever so slightly and deliver the policy anyway. That, it seems is the Conservative approach to democracy.