He is driving, she is hanging on his arm. Behind them a vista depicting a wide road disappears into desert upon a large screen. The cherry red of her lipstick matches her low-slung red dress, punctuated by a pair of cowgirl boots. Her dreamy expression says she’s completely at ease, hanging off her man; pleased as punch, because he is in control. But he has never seen the script before; he will be reading off an autocue. She is the one driving the show.

Performer-playwright, Louise Orwin, is touring the UK with her new theatre piece, A Girl and A Gun which was performed at Edinburgh Fringe this summer. Jean-Luc Godard’s adage “All you need to make a movie is a gun and a girl,” is the springboard from which Orwin’s performance dives headfirst into a chilling reality which is anything but surface deep.

Sex and violence, in which women are both willing and unwilling participants, is a familiar narrative in the media. We have consumed this time-worn pattern to the point of cliché. We yawn at the inevitable climax: Powerful man waves his gun around and seduces passive woman. Often, woman gets beat-up/shot/raped/murdered, legs akimbo amongst the spray of bullets. At least she looks good dead. Her death is not calculated — a mere sidestep in the narrative — an obligatory midway denouement of the Western, the spy movie, the superhero story. She just got in the way. Sometimes, it is woman who waves gun around and is likely to be wearing hot-pants. A quick Google search throws up a smorgasbord of images; the army fatigues ripped up to make boob-tubes makes me wince. Her nipples are as hard as bullets. When woman is brandishing weapons, she is not woman, but woman dressed as man. The sublime becomes the ridiculous. Orwin’s theatre walks and talks us through all these scenarios in a flawless Southern drawl.

Divided into multiple scenes and two parts, A Girl and a Gun is a Western movie excruciatingly compounded into its essential narrative where male and female roles are pre-determined by good ‘ol patriarchy, and Orwin locates her unsuspecting male actor right at the centre of her story.

Wednesday night’s male actor did a pretty good job of playing along, putting on a Texan accent which only wavered when the auto-cue sped up. This clever twist of audience/participant got me thinking long and hard (excuse the pun) about the power dynamics at play. And Orwin’s big achievement is the inversion of which gender is in control here: she’s pulling his strings from behind the scenes. Although manipulation is at play, Orwin takes good care of her male lead. “I don’t have to do anything I’m not comfortable with,” he tells the audience in the opening scene. He’s told to slap her—he barely touches her face—go on, she signals, do it—his fingers brush her cheek and she feigns being thrown to the floor. It’s an uncomfortable moment. Later he’s told to kiss her “hard,” and he does.

Part one is Orwin in a red dress, femme fatale, spitting cherry stones on hypnotic repeat, twirling and ripping the stalks from her red lips and shakin’ her hips. She is “hunny bun, sugar pie, sweet thing” and he is “daddy, daddy-o, big guns”. The audience is laughing, and she is polishing his guns with much innuendo. He barely cracks a smile. He also looks a bit silly in his over-sized cowboy hat.

Part two is Her in a white dress—chosen by Him from a rack of costumes on the stage. She dances for him in bare feet—her cowgirl boots kicked off. The audience are told that we’re not sure who she’s dancing for. Us? Him? She looks less girlish—less infantilised—in white. They kiss, she dances, and the auto-cue, displayed on the screen above them, betrays these stock character’s inner lives: she is wondering whether “he likes her,” whilst he is thinking about “tall mountains and dry deserts”. The audience giggle at this apparently familiar disjunct in communication between the sexes. This is where Orwin’s pairing of Him and Her reveals its genius. He (unsuspecting male actor) is wooden by virtue of not knowing what will happen—an unsuspecting member of the public. He’s also no less wooden than most male characters in any given Western movie. She, of course, is adept at emotion, and, by virtue of being female cannot do anything but effuse it without filter. She is love-sick, obsessed and spinning in the orbit of the male figure she has fallen in love with.

the dying on repeat feels suddenly unremitting, disturbing. How many times must a woman die?

She’s told to kneel before him and he puts a revolver in her mouth. The tone has changed from the sickly sweet daddy-daughter routines of part one, and has taken a nightmarish turn. Humiliation and annihilation are part two’s undertones. In one later scene, she plays out deaths through various gunshot wounds: a single shot to the heart, a bullet through her head. We laugh at first, at her overacting, the way we laugh at zombie scenes. But the dying on repeat feels suddenly unremitting, disturbing. How many times must a woman die?

Throughout the performance the word “automaton” repeats itself through Orwin’s characters—sickly sweet woman in red, humiliated woman in white, are both “on automaton.” Lust and fear have put her on machine mode.

The final scene is him in the spotlight, telling us, with more emotion than he has given us yet, how beguiled by his own power he is. She is sat at the back of the stage, telling us how tired she is, how deflated and defeated she has become by his lust for himself and her servitude to it. Her Southern accent fades and Orwin is her English self again. Reality dawns and she drops the mic with a thud. She just can’t do it any more. Exit stage left. Unsuspecting male actor closes the night with the words, “I was the star of the show”. 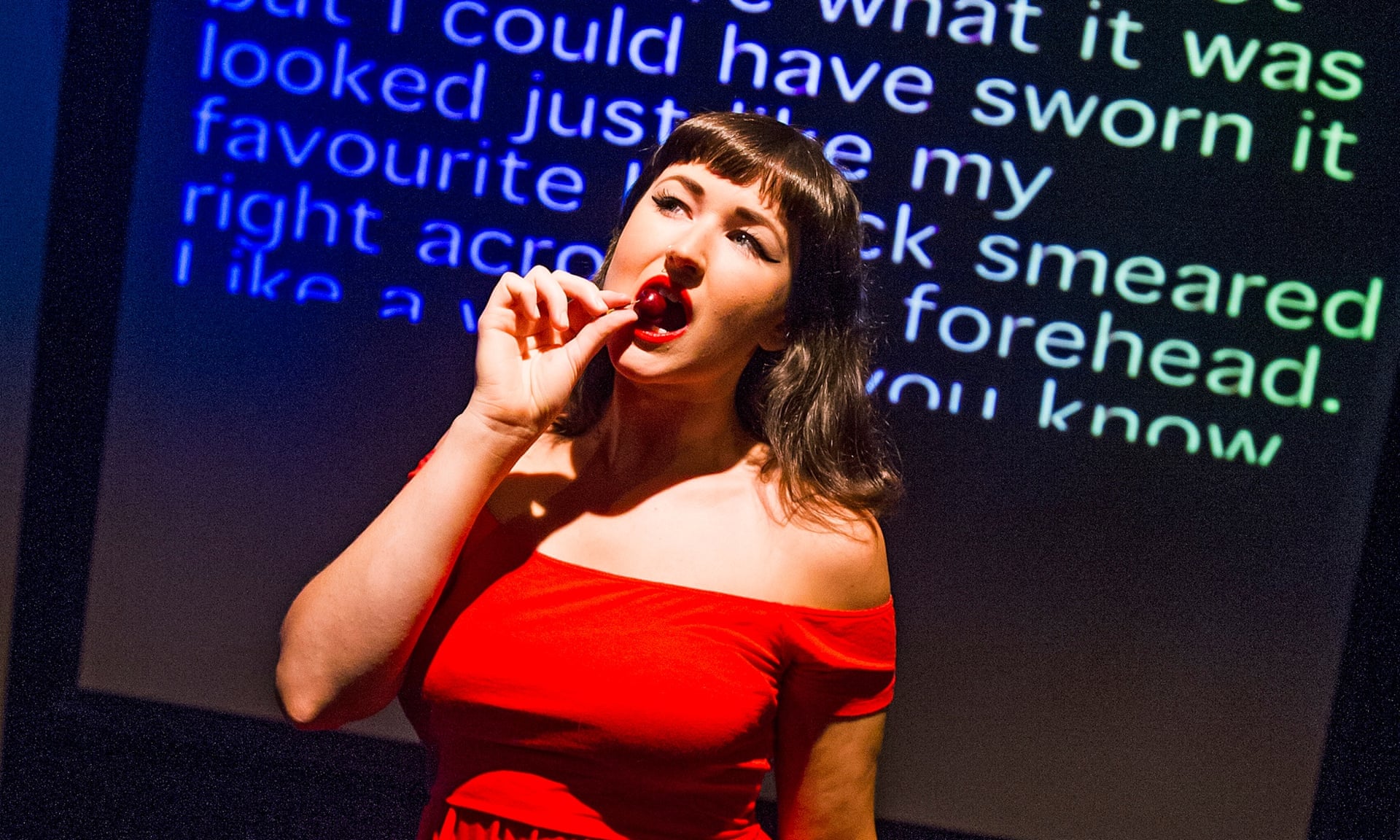 Later, in the Norwich Arts Centre bar, myself and two friends dissected our experience of being audience members. I could not help but feel somehow complicit in the whole thing. The sex and violence stories are so readily consumed by us that we have become numb to it—because to feel slighted by every humiliating scene would surely break a person. I call myself a feminist, but it feels as though I’ve been bumbling along in third gear with my eyes half-shut. And this is the brilliance of Orwin’s piece: a play without a narrative, but driven by an over-arching narrative that is so blindingly obvious we never thought to question it. Tarantino, Star Wars and many other illustrations come up in our conversation, the examples are prolific.

The next time I see a gun and a girl on the TV, I won’t get mad or feel slighted, I’ll  laugh at the vapid nature of it all, how unoriginal it is, and probably switch it off. Because if nobody is watching, then the power surely fades.