Nearly every building in east Mostar bears war wounds. Tumbledown ruins stud the streets like broken teeth. The imposing concrete hulk of an abandoned bank juts into the sky over midtown, surrounded by parks and covered in graffiti. The famous Old Bridge over the river Neretva is notable both for its beauty and the fact that these marks are absent. Destroyed in 1993 by Croat tanks, the Old Bridge is one of the few things in this wounded city that has been properly rebuilt.

UNESCO plaques stud Old Town, listing countries that donated money to rebuild the bridge and the surrounding areas. It was a tourist landmark before the war, and it feels like the only part of Mostar the world really cares about — certainly, there doesn’t seem to be any money to clear the minefields on the surrounding hillsides, or to treat Bosnia’s tens of thousands of post-war PTSD victims. Tourists don’t visit them, after all, so it’s not like the spirit of international co-operation applies in the way it does to the pretty scenery in Old Town.

In In Harm’s Way, an account of the Bosnian war written in 1996, the journalist Martin Bell described Mostar as ‘A city of two halves, its principle businesses being tourism and crime.’ The former booms in Mostar — Western backpackers and Middle Eastern tourist families poke around the packed souvenir stalls of Old Town and swim in the picturesque Kravice falls. Locals regard them with bemusement — Bosnians are culturally and ethnically Muslim, but in roughly the way that the British are Christian — few wear head coverings and fiery rakija is a national institution.

(Bosnian feminism on a ruined bank in Mostar © Rob Harding)

As for crime, the city feels remarkably safe — certainly less intimidating than the tourist-trap city of Split in Croatia, where HVO murals are everywhere and tourists are regularly fleeced, or outright mugged. Still, our hostel owner carried a handgun when taking us on a tour of the city, and was wary of a group of young men on motorbikes who approached us on the hillside above the city. He warned us against hitchhiking in Bosnia — many people still have their guns, money is tight, and hitchhikers are liable to find themselves being robbed at gunpoint or worse.

The ethnic tensions of the war aren’t far away in Mostar either. The war wasn’t so much ended by the American-enforced Dayton Accords as it was paused. The west of the city is still predominantly occupied by Catholic Croats, allies of the Bosnian Muslims until 1993 and bitter enemies thereafter. While ethnic and religious clashes are few and far between, deliberate provocations still abound — the vast cross that towers above Mostar on Mount Hum was built by the Croats in 2000, supposedly to ‘spread the fruit of peace to all sides of the world’ according to the Christian bishop who spoke at its opening

Marble-fronted graves commemorate Croat HVO soldiers killed on the hill nearby — soldiers who were firing indiscriminately into an urban area.

Marble-fronted graves commemorate Croat HVO soldiers killed on the hill nearby — soldiers who were firing indiscriminately into an urban area. The nearby and achingly beautiful village of Pocitelj has a number of graves and a billowing Croatian flag, just down the road from a medieval village which was ethnically cleansed by the HVO. If you visit, be sure to buy fruit and souvenirs from the local stalls. According to our guide, the stallholders are former concentration camp inmates.

In Mostar, as in much of the rest of the strange entity that is Bosnia and Herzegovina, the war sometimes feels a lot less than twenty years away. But while some hardliners are still snapping at each other, the majority seem to have no desire at all to see the war return. Our guide, a fiercely politically motivated man who fought in Mostar aged just 16, is critical of the Dayton Accords (‘How can I make peace with someone who killed my family, who killed my grandparents?’) and the lack of nuance in their US-imposed terms, but he does say that ‘The only good part of it is that the war is over.’ He has no desire to see it start again. 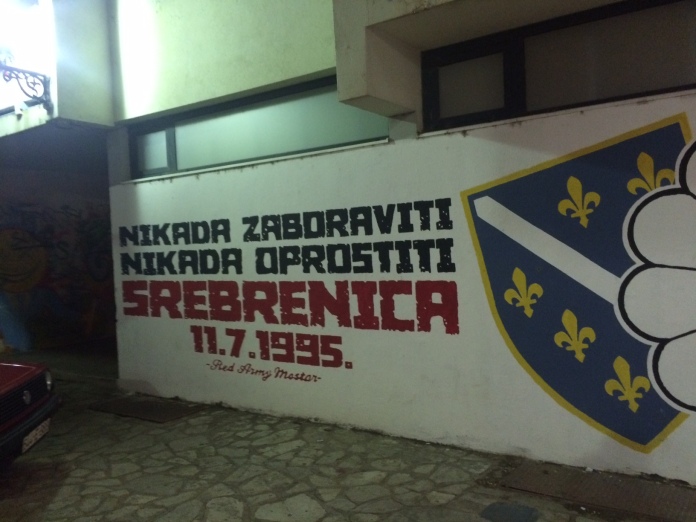 Sarajevo sometimes seems frozen in time. McDonalds has colonised it, there was a Holiday Inn here before the war (a startlingly ugly building, but one that holds great historical significance) but street signs still mention the 1984 Winter Olympics. The old Ottoman marketplace and Austro-Hungarian midtown seem almost unchanged, and some buildings even still bear the scars of fires from 1994. Bullet holes are everywhere, of course. Sarajevo was besieged by Bosnian Serb forces for 1,425 days — the longest siege in modern history. The Serbs surrounded the city, save for a tiny corridor across (and later under) the UN-controlled airport, and attacked indiscriminately with heavy artillery, tanks, mortars and snipers.

I would go on, talking about the tours of the ruins and the minefields and the militaristic graffiti that replaced the iconic ‘FUCK THE WAR’ of yesteryear, but focusing on Sarajevo’s recent history does it an injustice. Fuck the war. There’s more to talk about.

First let’s talk about the bickering mess that is Bosnia and Herzegovina’s central government (three presidents, one for each ethnic group, and innumerable prime ministers and ministers representing the fractured sections of Bosnia’s post-war political landscape) continues to struggle with both itself and the needs of its people. Trust in the government is weak or non-existent.

Fuck the war. There’s more to talk about.

Our guide in Mostar angrily claimed that the government does nothing to support the injured or traumatised from the war, and fondly reminisced about his life under the autocratic (but functional) regime of Marshal Joseph Tito when Bosnia was still part of Yugoslavia. ‘Now, we live in a crazy world, this capitalism’, he said. Our guide in Sarajevo, born in 1992 and nearly killed at an early age by a Serb sniper, was more resigned. A keen explorer of the minefields and forests above the city, he simply shrugged when we asked if the government was cleaning up the mines. He described Bosnia as ‘fifty years behind’ the rest of the world.

‘Now, we live in a crazy world, this capitalism’

Major protests rocked Bosnia in 2014 when the government failed to bail out collapsing industrial giants. Several local officials were forced to resign. Bosnia is also still hoping to resume talks to join the EU. Many we spoke to were bewildered and annoyed by the Brexit referendum. A large banner in central Sarajevo hung over the annual Film Festival, the words ‘WASN’T IT ENOUGH? 1992 1995’ stark beneath an EU flag. Bosnia is not yet eligible to join the EU despite support from Croatia and several other EU countries, but pro-EU feeling is relatively strong and the EU itself is considering special concessions to assist them in reaching the required standards.

I suppose the takeaway here is that Bosnia is not (as some predicted it might be) a failed state. There’s hope yet. Sarajevo’s bullet holes are being patched and fixed. New construction is spreading across areas that were once rubble — a shiny new shopping centre next to the equally modern Parliament building now dominating Sniper’s Alley, a new hotel on the site of the brutalised Oslobodjene Tower. The ethnic divisions are taking longer to heal and there’s still a generation that remembers the war (and more concerningly, there’s now a generation that doesn’t, but hears first-hand accounts), but most are adamant that they’ve no desire to see the war return. They’ve seen what it can do first-hand.

At the intersection between the Ottoman-built Old Town and the Austro-Hungarian midtown, one is no more than two hundred metres from a mosque, a church, and a synagogue. The old dream of a multi-ethnic, multi-religious Bosnia is gradually returning. Sarajevo is a city that held a beauty contest and founded a film festival under daily shellfire. It’s a place that seems to value human dignity and multiculturalism. It’s a city of hope.

Interested in more of Rob Harding’s travel writing from across Eastern Europe? Check out Part 1 and Part 2 of The Other Side: A Look At Europe.

2 thoughts on “SARAJEVO ROSES, THE STARI MOST: A TRIP TO BOSNIA”