‘Democracy is government of the people, by the people and for the people.’
– Abraham Lincoln

Democracy has long been the banner to which Western leaders rally their troops to fight under. The Brexit referendum is a prime example of extreme democracy, progress for some at the expense of others. The desired outcome for the Leave campaign is for the UK to become a self-governing democracy. Just how much more democratic will the country become?

Freedom House produces an annual report, ‘Freedom in the World’, using a series of 25 indicators to determine scores for political rights and civil liberties. This year’s report stated that 2015 is the tenth consecutive year in which global freedom has declined, some 72 countries showing decline in that year alone. This, and other such sites which provide data sets like the Democracy-Dictatorship Index, demonstrate clearly that dictatorships not only still exist but have been mutating into hybrid regimes. This is an illiberal democracy, where voting and elections take place but the actions of those who really control society are not visible to the general population and therefore do not come under any kind of regulation.

When we hear the word dictator, the likes of Zedong, Stalin and Mussolini come to mind. History teaches us that a dictatorship is created through iron political will backed up by military power and the suppression of ideological opposition. The actions of Turkish president, Recep Erdogan after the recent attempted coup, show his determination to purge the Turkish authorities of those who may not support him in a manner reminiscent of Stalin’s purges except with less killing, for now. Yet modern dictatorships can differ from the strongman image of the past. They are eased into society with the help of PR firms, financial donations and lawyers.

But while the media will tell us that such authoritarian behaviour only exists in far away places, the truth is that it is closer to home than we think. A YouGov survey earlier this year found that the British media is considered the most right-wing in Europe. Mafia expert Roberto Saviano said that he views Britain as the most corrupt country in the world which is disturbing coming from a man who spent more than a year exposing the Italian Mafia.

Our democracy is free because someone else is paying the price.

The creation of the UK Department of Business, Energy & Industrial Strategy shows the ambition of a government to decide case by case the involvement of foreign business in taking over UK companies. Governments should stay away from such markets and allow the flow of business to progress naturally otherwise foreign investment will be scared off. The department website states that part of its purpose is “developing and delivering a comprehensive industrial strategy and leading the government’s relationship with business”. If this were the case, why did the government block the EU from raising tariffs on Chinese steel? This was a chance to save the jobs now being lost at Tata Steel. Why did the US government lobby the Haitian government over its proposed increase of hourly wages? Because of commercial interests. The democracy that we believe we are experiencing is only happening because of someone else’s agenda. We have the freedom to buy gadgets that deplete the resources of a country, the freedom to drive around because of the oil extracted through violent means from poverty-stricken communities abroad. Our democracy is free because someone else is paying the price.

Dictatorships are easier to maintain than democracies. Most countries have something to offer and therefore receive preferential treatment when it comes to human rights abuses and violent suppression of oppositional political parties while at home our leaders harp on about how much they love democracy. Democracies, on the other hand, mean that governments have to deal with protest groups and social justice movements. Free(ish) media allows people to post their opinions online. But democratic populations are more easily distracted by capitalism and its products. Dictatorships only have to remove their opponents by whatever means they can get away with while democracies have to play the blame game, putting their failings and inadequacies on the shoulders of their counterparts. 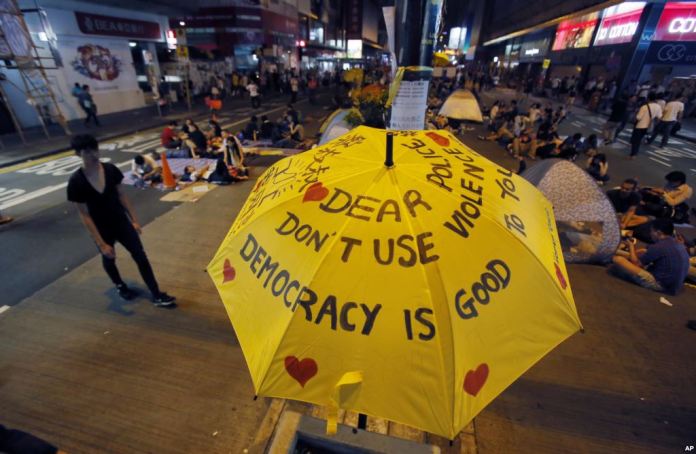 Which brings us back to choice. In November, the US will hold what will probably be by then one of the most vicious presidential campaigns seen in the West. Many may be confused over how it is that Donald Trump is within touching distance of Hilary Clinton. The media attacks Trump for being egotistical and out of touch while failing to adequately show the clear favouritism that Clinton has been given and her connections with the very commercial interests that seek to dictate the terms of democracy. Like many countries, voting for the lesser of two evils has all too often become the norm.

Like many countries, voting for the lesser of two evils has all too often become the norm.

Democracy has come to represent what we feel we have lost. This must change. Democracy should be about what we fight for, here and now. Feeling sorrowful over what we had in the past serves no purpose; it can leave us unsteady and uncertain over which direction to take next. We allow ourselves to be distracted by the actions of other countries while dictators are exploiting us at home. They fill the gap with temporary solutions or worse, they take us down a darker path. We must cast aside the temptation to rely on someone else to get us through the hard times. Unity has never been as important as it is now. An individual who knows that what we have is not enough is far more powerful than someone who is content to go with the flow. When that individual realises that they are not alone, they become more aware and determined to find others who feel the same and will join the fight for something better for all. And when the people unite to speak as one against injustice, against waste, against unnecessary wars, against a system that seeks to keep them unsteady and uncertain, that is a show of true democracy.