It is difficult to remember a time when Tony Blair was considered a real hero. But that was the mood when he won the 1997 general election in a landslide. ‘New Labour. New Britain’ was his slogan, as he put an end to the old Labour politics that the people distrusted and vowed to carry Britain proudly into the new millennium. People were chanting his name in the streets, the euphoria was palpable. A stark juxtaposition to where we are today, 13 years after the Iraq War began, the world still reeling from Blair’s decisions. A hero is the last thing we would call him now.

Blair has always been regarded as a master tactician who could easily manipulate the situation to his favour and he knew that he possessed this extraordinary power. But it is how he wanted to wield this power that would cause his downfall. He wanted to leave a legacy. A grand ambition that could only be realised through a grand accomplishment: striking down the biggest villains of the world, one after another.

Blair immediately took the stage in the global arena during his first intervention in Kosovo, where the ongoing tensions between Serbians and Albanians had escalated into a humanitarian crisis, with the horrific ethnic cleansing of Albanians. He forcefully pushed NATO for a military intervention, without approval from the UN Security Council, and committed 50,000 British troops — most of the British Army — to the cause. Shortly after NATO airstrikes ended, Yugoslavian President Milosevic yielded and a time-line for peace was set up. In its aftermath, the NATO campaign was considered by many to be successful especially in the view that many Albanian refugees have now returned to Kosovo. In this part of the world, Tony Blair will always be a hero with many affectionately naming their children ‘Tonibler’ or ‘Blair’ in his honour.

He forcefully pushed NATO for a military intervention, without approval from the UN Security Council, and committed 50,000 British troops

After the tragic events of the 9/11 terrorist attack, Islamic extremism became the Western world’s new villain. Blair quickly established Britain as the US’s principle ally in this time of mourning and crisis. Maybe to some extent he did feel this was the right thing to do, but no one can deny the strategic importance of this gesture. Through this friendship, Blair would make himself instrumental in ousting the Taliban and Al-Qaeda from Afghanistan, causing the terrorist mastermind Osama bin Laden to flee.

In the UK, public opinion was generally supportive of the Afghanistan War, at least at its outset. Perhaps if Blair stopped pursuing his global status there, we may have forgiven any foul play on his part during these interventions. He may well have been remembered as one of our greatest leaders.

But he wouldn’t stop there. Not whilst there was a certain villain still standing: Saddam Hussein.

Long before the events leading up to the Iraq War, Blair had regarded Hussein with upmost contempt and had adopted a UN-backed policy of containment against the tyrannical regime. This was undoubtedly the source of Blair’s unyielding friendship with President George Bush. Despite his right-wing Republican policies, Blair shared with him a common enemy.

Reading through the documents of the Chilcot Inquiry, released last week, you get a very personal insight into Blair’s mindset during this time, the machinations of his near megalomaniac thirst to achieve his goal.

the machinations of his near megalomaniac thirst to achieve his goal

Rather than being Bush’s lap dog, what is clear is that Blair was very much the brains of the operation. In his now infamous note to Bush beginning “I’m with you, whatever”, Blair set out a detailed plan for the US to gain international partners. Similarly calculating plans to manoeuvre global politics were found in an earlier note.

Blair took increasingly reckless decisions over this period, symptomatic of his narcissistic obsession. He went about gaining approval from the cabinet, the parliament and the wider public by circulating a document now deemed the ‘dodgy dossier’. Blair claimed that Iraq was likely to have Weapons of Mass Destruction (WMDs) that could be deployed within 45 minutes of an order — we know now that this was completely unsubstantiated. 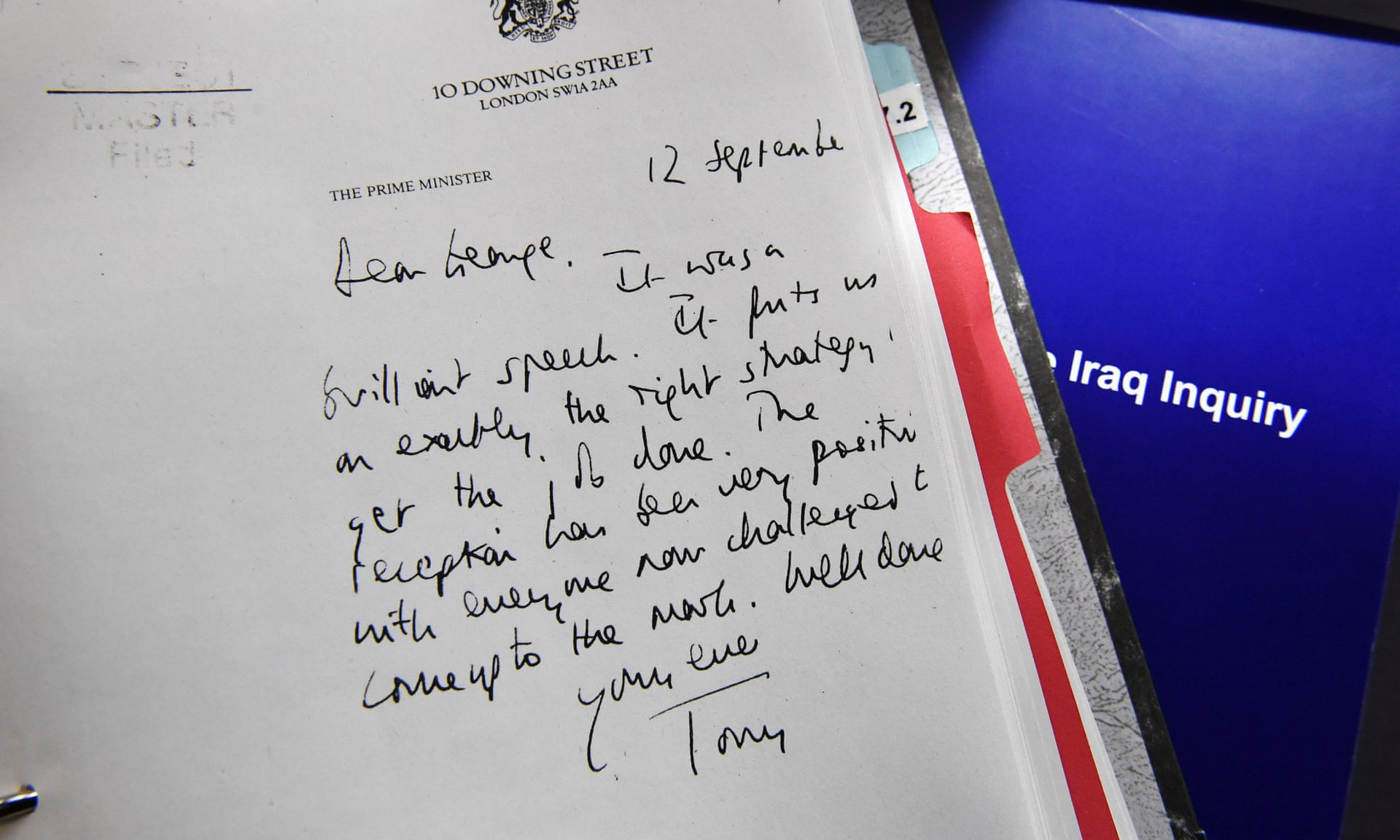 (A declassified handwritten letter from Blair to Bush © Reuters)

He hit an obstacle when Iraq agreed to allow weapons inspectors into the country in compliance with a UN resolution. But Blair was convinced that Hussein needed to forcibly be removed to the extent that he viewed anything, that didn’t fit within his narrative, with complete disregard. So rather than welcoming this positive step, Blair was sceptical and he drafted a new, more stringent resolution that threatened the use of force in the event of non-compliance. He also ignored opinions of his advisors with then Attorney General Lord Goldsmith, questioning the legal basis for military intervention and then Foreign Secretary Jack Straw, suggesting Blair and Bush develop an alternative, peaceful plan.

It seems now that Blair never expected or wanted the Iraqi regime to comply. Rather, he wanted an excuse for military intervention, whether it be through non-compliance or evidence of a WMD programme. Neither of these things surfaced but Blair was still determined to get his way. He set about convincing UN officials that Iraq was going against the spirit of the UN resolution through being uncooperative. Blair was un-phased when he was told that the notion of full cooperation was a nebulous concept and that perhaps there weren’t any WMD’s in Iraq after all.

he wanted an excuse for military intervention, whether it be through non-compliance or evidence of a WMD programme

After it became clear that the UN Security Council would not back his case. He abandoned this route and took his case to the Commons. He argued that there was a legal basis for military intervention, that the UN route had been ineffective, that Iraq possessed a huge capability to develop and deploy WMD’s and further still that Hussein’s tyrannical regime needed to made an example of. It was in this premise that on 18th March 2003, the commons voted 412 to 149 in a motion supporting the intervention. On 20th March, Blair took us to war with Saddam Hussein.

(One million people demonstrate in London Hyde Park Anti-War protest February 15, 2003 © We Are Many)

Blair eventually did achieve his aim of toppling Saddam Hussein, but from all the sectarian conflict that has since sprung up in the Middle East, after the coalition withdrew their troops, it has come at a far greater cost that we may never forgive. But whether or not he knowingly deceived the public is another matter. Perhaps through his sheer narrow-sighted pursuit of Hussein, he genuinely believed his case for military intervention. In all of his notes and memoirs he never once mentioned otherwise.

whether or not he knowingly deceived the public is another matter.

Never the less, in the name democracy he pursued his villain but did so without adhering to democratic procedures. As the Chilcot Inquiry concludes, though Blair didn’t secretly commit to it, he pushed the idea of military intervention long before he had any basis to do so. He invented stories about nature of the threat without sufficient evidence. He also made decisions on his own, without any prior discussion or approval from cabinet ministers. Maybe he thought it unnecessary or that those opposing him were plain wrong.

In his speech last week, in the wake of the Chilcot Inquiry’s release, he said that he did not regret his decision to go after Saddam Hussein. Blair may think of himself, not as a criminal who broke international laws, but as a vigilante seeking justice in the face of inadequate bureaucracy. But in everyone else’s eyes the story is very different. Through trying to build a legacy of striking down the world’s greatest villains, he has ended up becoming one of them.

Featured image: A British Iraqi protester holds up an Iraqi flag, during a protest, outside the Queen Elizabeth II Conference Centre in London, after the publication of the Chilcot report into the Iraq War © Matt Dunham/AP