You know what? Everyone’s writing about how my racist Gran and 17,000,000 of her mates have screwed the UK over. Instead, let’s talk about something positive.

On June 23rd 2016, while the eyes of the world were decisively elsewhere, the Colombian President, Juan Manuel Santos emerged from negotiations in Havana with the left-wing FARC rebel group and announced a ceasefire. This ceasefire is the first major break in a fifty-year conflict which has claimed 200,000 lives and left Colombia a mess of drug trafficking and insurgencies. While the deal is nothing more than a ceasefire, it has been hailed by many Colombians as the first step in a peace process that’s been a long time coming.

So, who are FARC? If you aren’t a serious geopolitics nut you may not have heard of them, but they’re one of the key players in the longest ongoing civil war in the western hemisphere. The movement’s origins date back to a vicious, decade-long civil war called La Violencia in 1948, a war fought between the Conservative and Liberal parties. While accounts vary, the movement that would become FARC emerged in 1964, when a massive force of Colombian soldiers were sent to attack a breakaway region known as the Republic of Marquetalia, a communist region which had declared independence from Colombia. The republic was one of a number of enclaves in the southern part of the country, inhabited by people, mainly peasants, who fled La Violencia. The Colombian government attempted to regain control of these communities, and when the army arrived in Marquetalia, it quickly collapsed, in part because it was defended by just 48 fighters. Many of the survivors scattered into the hills, however, and formed the core of the Fuerzas Armadas Revolucionarias de Colombia, rapidly growing in size until they became one of the larger players in a nasty civil war.

FARC are a Marxist group with shades of left-wing nationalism, anti-imperialism and revolutionary socialism. They are also the military wing of Colombia’s communist party, funded partly by taxation on the regions they control, but mostly by drug production and extortion. In 2013 they had around 7,000-10,000 members and controlled nearly 40% of Colombia, alongside their sister group, the Ejército de Liberación Nacional. They’ve been criticised for their tactics, which include kidnapping soldiers and civilians for ransom, the use of child soldiers and indiscriminate use of car bombs, inaccurate gas cylinder mortars, and mines. In addition, FARC has also abused Colombia’s indigenous peoples, assassinating their leaders and activists and forcibly conscripting them. Their attacks on oil pipelines have even been accused of causing reckless environmental damage, with FARC guerrillas sometimes forcing oil tanker drivers to tip their loads onto the road.

FARC initially fought largely in rural areas, only stepping up their attacks in 1982 once a boom in cocaine production gave them the resources to expand into a full irregular military force. They shifted to attacks on the Colombian military directly, as well as attempts to establish control over resource-rich areas near medium-sized cities. In 1984, then-president of Colombia Belisario Betancur was able to agree a cease-fire which lasted until 1987. Representatives of FARC and other similar groups formed the Patriotic Union Party (UP), with varying success. In the 1990 elections, over 70% of Colombia’s presidential candidates (including 100% of the centre-lefties) were assassinated. Negotiations continued but broke down late in 1990 when the Army attacked the base of the FARC’s national secretariat, claiming that the attack was caused by FARC’s refusal to wind down its criminal activities during that time. Negotiations broke off for good in 1993, and fighting and protests continued until the early 2000s. FARC’s reliance on narcotics trafficking has been compared to that of the Taliban, both banning the use of the drugs among their members but thriving on selling said drugs.

Their most recent high-profile actions came after the collapse of a previous unilateral ceasefire in 2015, following negotiations that began in 2012. FARC fighters attacked an oil pipeline in Catatumbo in northern Colombia and briefly deprived more than 16,000 people of water, causing massive environmental damage to boot while also launching attacks in various other areas. Despite the ongoing conflicts, FARC appears to be genuinely invested in the current peace plan; in 2014, FARC and the Colombian government reached an agreement to fight drug trafficking together, planning to help farmers switch to other cash crops rather than marijuana and cocaine. Some sources point to President Juan Manuel Santos’ hardline tactics exhausting FARC, with air strikes and government crackdowns severely damaging the group’s ability to wage war. Others suggest that FARC itself has become directionless, with many of its leaders dying in the recent crackdown.

So what’s different about this ceasefire? After all, FARC and the Colombian government have made peace before only to collapse into violence once again, and while FARC may seem weak and sick of fighting, they’ve bounced back before and are still entirely capable of raising hell in Colombia. As seen here, they’re still well-armed and organised. However, with the Cold War over there’s a lack of the international pressure to suppress FARC’s more communist tendencies, and with the anti-drug agreements there’s also less US pressure to suppress FARC to try and stamp out the cocaine trade. More to the point, there’s an increasingly vocal element of Colombian society who are sick of the constant violence. Anti-violence rallies have been increasingly prevalent across Colombia in recent years. 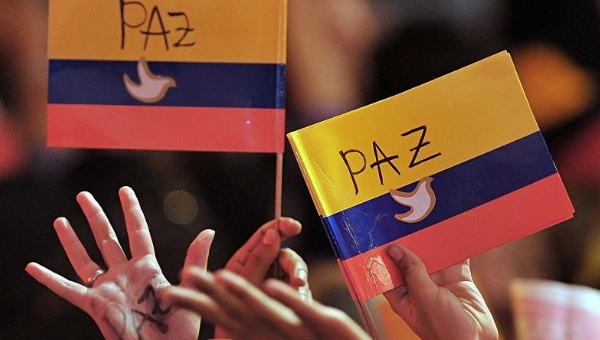 So, what happens now? Hopefully, the ceasefire will hold, and final accords will be signed – Santos has stated that he hopes this will be achieved by the end of July. The United Nations has established a political mission in Colombia to monitor hostilities, although at present they’re only deploying unarmed observers. The announcement on Thursday also laid out plans that commit rebel forces to laying down arms 180 days after a peace deal, creation of temporary camps and transition zones for the rebels and a provision that prevents civilians from entering FARC camps. The UN will receive all of FARC’s weapons, hopefully preventing other groups from getting their hands on them. Colombian courts will rule on whether to hold a popular vote to endorse the deal in Colombia, as promised by Santos.

Things could still go wrong. As usual with civil wars and insurgencies, it remains to be seen whether hardliners on either side will respect the ceasefire, and Colombia is not short of militias and rebel movements who might move into a power vacuum left behind when FARC disbands. Other groups remain active in Colombia. Worse, the attempts by the Colombians and FARC to reduce the drug trade in the country may have the opposite effect, putting Colombia at risk of collapsing into a Mexican-style drug war. There’s a danger of combatant splintering, with groups of FARC fighters turning to drug trafficking or attempting to retain control of their territories rather than giving up their power and influence.
Still, for now the guns are silent, and Bogota is celebrating. This is the closest Colombia has been to peace in decades, and that’s good news.