A massacre in an LGBT+ space, by a Muslim, with a legal gun, and alleged connections to Daesh. It’s easy to see how contemporary American anxieties converge in the political aftermath of the Orlando shooting. The media response to this — the largest massacre in modern American history — exposes how truth is controlled by the present political regime.

For those who do not spend their days fretting about radical social discourse, homophobia can be difficult to define. Before Obama legalised same-sex marriage federally, it dominated the media conversation, establishing rights as the fulcrum of group empowerment. While the LGBT+ movement focused on this, statistics revealed that LGBT+ kids across the world were entering sex-work and committing suicide at an alarming rate. If such statistics were ever mentioned, it was to bolster marriage as the unequivocal endowment being denied to the LGBT+ community. The institution Australian Marriage Equality claims that the ‘higher rates of drug and alcohol abuse, homelessness, early school leaving, conflict with peers and parents and suicide ideation [are] all directly related to the discrimination.’ Marx might have called this ‘bridal false-consciousness.’

Meanwhile, those of us who were suspicious of the emancipatory potential of marriage — whether for queers, women or the proletariat — stepped nervously into the shadows. Highlighting marriage’s role historically in protecting wealth accumulation and class stagnation, in institutionalising monogamy, and in naturalising the bond between women and the domestic, was tantamount to pissing in someone’s cereal.

those of us who were suspicious of the emancipatory potential of marriage — whether for queers, women or the proletariat — stepped nervously into the shadows

Perhaps most troublingly of all, marriage fortifies the compounding of church and state. This embeds the religious view of marriage into law, as the paramount format for love and healthy child-rearing; a covert breach of secular principles, so that the state can regulate the so-called private sphere along the vectors of sexuality, race, and caste. Any threesome that sought a marriage license found that their relationship was not up to the government’s standards. Same-sex marriage advocates did not question the fact that marriage is an arbitrary concept, invented by authorities, which permits those authorities to draw the lines between clean and dirty relationships. Marriage is in no way timeless or divine, as Christian conservatives would profess, yet this tory precept blends into the wallpaper of the LGBT+ headquarters, unnoticed. Simply put, a ‘right’ is an oversimplified legal concept that does not adequately capture the extent of heterosexist domination.

The heterosexual underpinnings of language and culture help define and buttress male friendships, creating a static and volatile masculinity, constantly fearful and threatened by the tides of progress. From this angle, it is easier to understand how the Orlando massacre could occur, and how implications of the shooter’s bicuriosity could enrich the explanation. However, as the gunfire ceased in Orlando, the story was being pushed through the print presses of the New York Times. For those familiar with the media’s disinterest in homophobic violence, it was not surprising that the NYT neglected to mention an LGBT+ space was attacked.

On Sky News, commentator Owen Jones made the case that as a gay man, this kind of violence is not entirely alien or surprising to him. Those of us who live as ‘deviants’ know how close we are, constantly, to provoking backlash simply by existing. This was not what the presenter wanted to hear. A crime is only relevant if it is ‘against human beings,’ because audiences do not like to hear that they and their gay-bashing uncles are responsible for a larger problem. Hence the presenter declared this a savage assailment on ‘the freedom of all people to try to enjoy themselves,’ a statement that means less and less each time you read it. ‘You wouldn’t understand this because you’re not gay,’ Jones argued. Here he outsteps liberal individualism, claiming that being part of a community gives him vastly different insight. This breaks liberalism’s rights-based notion of homophobia, and replaces it with the more discreet ideological concept of heterosexism.

A crime is only relevant if it is ‘against human beings,’ because audiences do not like to hear that they and their gay-bashing uncles are responsible for a larger problem

When group issues are raised, liberalists rush along to plug up the holes in their philosophy with anything they can find. After all, liberalism depends on the sovereignty of the individual. Unless they impinge on the sovereignty of others, the autonomous subject of liberalism has the liberty to buy what they wish, believe what they wish, and say what they wish. The very idea that class immobility, prejudices, religions and gender ideologies can act as hurdles to this ‘equal’ access to ‘freedom’ for certain groups must be ignored, likely because it is an irresolvable criticism. This allows marriage and rights to be situated at the centre of LGBT+ oppression: if individuals have the same legal rights, then there is nothing else impinging upon their individual freedoms. Whether Daesh was involved in Orlando or not, the fact that straight people everywhere, of all creeds, are responsible for violence towards LGBT+ people has escaped the conversation altogether. This is to be expected in a post-Thatcher world, wherein there are only individuals and no such thing as society. 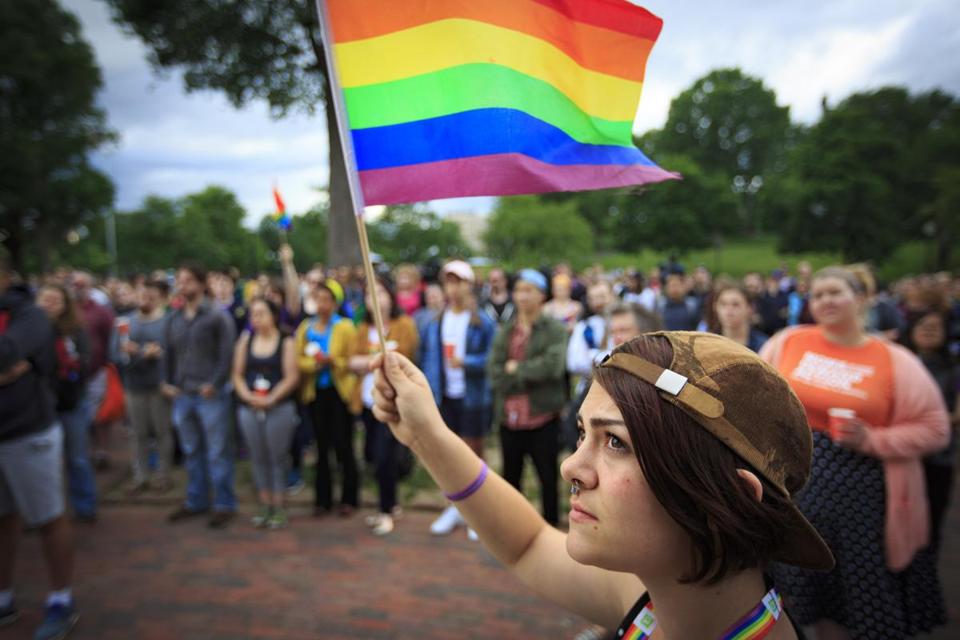 Staggeringly, the Right does not afford everyone the same extent of individuality. Bill O’Reilly declared that this is not ‘a tragedy … like an M Track train derailing. This is a basic war we’re in, and I look at the news from not only a contemporary view but a historical point of view.’ What a surprise! For the Murdoch Empire, this gunner is indicative of a bigger problem with Islam. The individual has disappeared for the Right, who are only interested in contextualising things (falsely) when Muslims are involved. O’Reilly declares all Muslims enablers in their communities, and calls for more US military action overseas (because this has gone so well in the past).

The individual has disappeared for the Right, who are only interested in contextualising things (falsely) when Muslims are involved

Alongside their annoying sectarian practice of saving their most ruthless invective for those of a different skin colour, the Right interprets white supremacist criminals as unstable individuals. On the 16th of June, British MP Jo Cox was brutally murdered in Birstall, West Yorkshire, whilst carrying out constituency work. Witnesses heard Thomas Mair shout ‘Britain First’ as he shot her, then stabbed her. Britain First is a notorious online white supremacist group, which thrives on feeding lies to those acrid and sullen enough not to question them. Britain First disavowed any association with the attack, regarding one witness as ‘a lying Muslim with an agenda.’ As blogger Thomas Clark points out, ‘had the murder suspect been a mentally unstable Muslim shouting “Allahu Akbar” we can be absolutely sure that Britain First wouldn’t have been so keen to paint him as a “lone wolf” killer.’

In the same vein of liberal individualism, the soggy rag The Daily Mail declares Cox’s killer ‘a timid gardener dogged by years of mental turmoil.’ Decontextualised, white people’s murders do not have to represent their ethnic or political groups. The killer was ‘disconnected from society as a result of long-term mental illness,’ the article begins, literally splitting the white man from the notion of society. Why, then, does the Orlando shooting by comparison represent ‘a war of attrition’ to O’Reilly and the Murdoch puppet-gang, and warrant comparisons to the ideologies of Nazi Germany? Could the discrepancy be more transparent between the treatment of individual racists who are unstable, and Muslims who are part of a dangerous community? Not only is this bilious nonsense racist, but it depicts the mentally ill as dangerous.

More progressive media figures are also guilty of erasing the heterosexist social context. Colbert, the semi-progressive host, responds to O’Reilly’s vision of Orlando as a Daesh battleground: ‘you have framed the problem in that way. … You can also say the problem is easy access to high capacity, rapid firing weaponry.’ A reframing of this reframing: O’Reilly blames the problem on a different society, whereas Colbert returns to rights and the potentially ‘schizophrenic’ individual. It’s as though Mateen’s gun just went off naturally of its own accord, else there is some core in humans just waiting to go around killing people. Everywhere ‘natural’ causes chain together, and the constructedness of homophobia is nowhere to be found.

As the 20-minute interview draws to a close, Colbert asks if this was a hate crime. O’Reilly pushes past this to the next question, shouting ‘EVERYTHING ISIS DOES IS A HATE CRIME, THE WHOLE THING!’ Conveniently, hatred is a product of Daesh, the identities of the victims are irrelevant and American resentment for gays and progress is blameless.

If the Left and the LGBT+ community wish to do justice to the victims in Orlando, they cannot allow the conversation to be dominated by Islamophobia and gun control. The facts and statistics about LGBT+ people are pain-inducing. Further, they must distance themselves from simplistic notions of homophobia overly grounded in abstract rights, stop focusing on middle-class concerns like marriage, and lay to rest the ‘let’s ignore our different experiences’ concept of equality. The LGBT+ movement needs to focus on those enduring the worst struggles, so that the world sees the violence our community experiences every day.

An extended version of this article can be read here, in full.