After finding myself caught in a particularly upsetting example of British weather on Monday afternoon, I decided my time hiding from the rain would be best spent nosing round the Impressionist collection currently held in the Courtauld gallery. After fanning away the tears that inexplicably began to spring from my eyes as I stood in front of Édouard Manet’s A Bar at the Folie-Bergère, I stood for a while to look at Vincent Van Gogh’s Self-Portrait with Bandaged Ear, painted shortly after the artist removed his own right ear.

Once I had gotten over my annoyance at the people taking photos of the works around them on their smart phones, instead of just looking at them – which I’m sure could make up another article entirely – I continued to look at the painting, the first real piece of Impressionist art I think I have ever seen in person.

The painting is probably well known due to a) it being one of very few portraits Van Gogh produced of himself, and b) its depiction of the injury he inflicted on himself when he personally removed his own ear. The reasons behind the artist’s act of self mutilation really aren’t important in this context, it’s not the missing ear that makes the painting interesting to me. Instead, I was intrigued by the connections I made between the oil-on-canvas Impressionist 19th Century masterpiece, and an article by Jonathan Jones, published in The Guardian earlier this month, titled James Needham’s bathroom painting proves art is doomed in the selfie age.

The article is an opinionated, and almost aggressive, review of Needham’s painting entitled Lovers, which has since been sold for £2,700. After completing the painting, the Australian artist then uploaded it to imgur , where it has been shared countless times and treated to inevitable, numerous sexist comments including, but not limited to, ‘Dat ass though’, ‘Nice butt’, and my personal favourite ‘Is that his side chick in the reflection’. 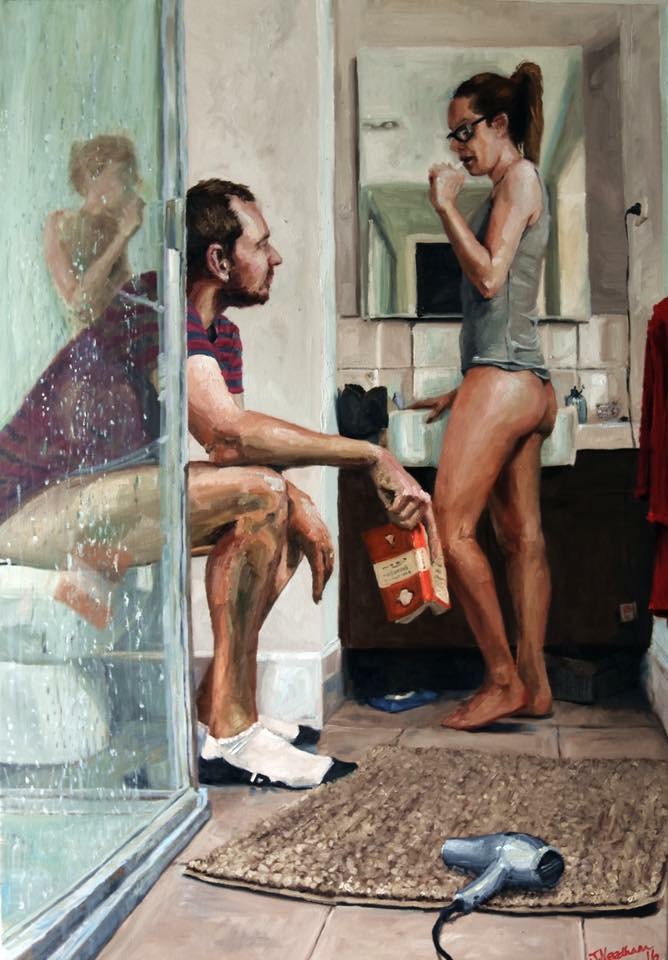 In his article, Jones is incredibly critical of the piece, describing it as a depiction of false intimacy, and an example of limited skill. The writer’s main critique of the piece is the way he believes Needham has lowered the value of a, supposedly intimate, self portrait to that of a selfie. Instead of a snapshot of domestic intimacy, he says that the painting represents a ‘private moment turned into a public image’. I am intrigued by Jones’ statements and opinions, as I myself have conflicted beliefs about how art and art history are being affected and influenced by the general public’s growing access to photography equipment, as a result of the increase in camera quality now available on smartphones.

On the one hand, could it be suggested that the ready available access to high quality camera equipment, made available via the development of smartphones, means that the everyday snapshots of the general public deserve a place in the gallery space? In a similar style to my critique of another article of Jones’, in which he asked whether or not photographs taken of Kate Middleton for the cover of Vogue deserved a space in the gallery, it essentially boils down to our feelings on what is considered valuable, what we mean when we class something as high or low art. Taking selfies using a digital camera or a mobile phone could, theoretically, be considered art. But it is a phenomenon so deeply rooted in social media that the lines between them and self portraits produced by more traditional mediums have yet to cross to a significant degree. This does not mean to say that this will not happen in the future, but it is the situation we are currently in. To paraphrase Stephen Fry:

Portraits are no more threatened by selfies
than stairs by elevators.