As you know, on Sunday a homophobic mass-murderer killed 49 people and seriously wounded 53 others in the Pulse nightclub in Orlando, Florida. He used a handgun and a semi-automatic rifle, took hostages and was only finally killed when the Orlando police rammed the wall of the club with an armoured vehicle and forced him to come out, before gunning him down.

News media and political statements have been full of Islamophobic vitriol and scaremongering. Owen Jones walked off Sky News after deciding he was sick of listening to Mark Longhurst and Julia Hartley-Brewer trying to downplay the homophobic aspects of shooting up a gay club in favour of a more anti-Daesh approach — despite the attack not yet being confirmed either way if in any way connected to Daesh. As Julian Canlas commented for The Norwich Radical, ‘It is not just an ‘Orlando nightclub massacre’. It is an Orlando lgbtQ+ Latinx nightclub massacre.’ Florida governor Rick Scott suggested that the best thing one could do to aid victims of the shooting was pray, and dodged questions about what could be done to stop further shootings— the NRA logo practically glistening behind his eyes.

The world’s largest mass-shooting-enablement agency has been suspiciously quiet since the shooting, as they always are post-massacre. Oh, except for a tweet promoting their store selling gifts for father’s day. Classy. Oh, and a tweet saying: ‘Even children aren’t short sighted enough to think gun control is a rational response to terrorism. They say make the monster go away’ from Colion Noir, NRA news commentator and general talking head. Go on, mate. Push your murderous agenda. ‘Don’t let them shame you for wanting to protect yourself and the people you love #thePewPewlife’, Noir tweeted on Tuesday. My thoughts on Mr Noir, and the ideology he and others are pushing, could easily be summed up in an article consisting of his picture and the word ‘wanker’ typed 1,600 times.

Oh, and Smith and Wesson and Ruger have reported record sales, because the ‘Good guy with a gun’ myth is alive and well, joined by its equally lucrative brother the ‘Gun laws are about to be tightened, quick buy something’ story. Never mind that the NRA is ridiculously influential. Never mind that, as the Daily Show (and common sense) proves, a ‘good guy with a gun’ can only make a situation worse. There was an off-duty policeman with a gun in Pulse. Details of his attempts to stop the killer have not been made public, but he failed. Orlando’s heavily armed, partially mechanised police force didn’t slow him down despite a response more suited to Fallujah than a hostage situation. People are buying more guns, either to protect themselves or out of misguided fear that the government will restrict their right to do so.

the ‘Good guy with a gun’ myth is alive and well, joined by its equally lucrative brother the ‘Gun laws are about to be tightened, quick buy something’ story

At least one company has taken a hit for their part in the shootings — the killer’s former employer, the security giant and rolling organisational clusterfuck G4S, which utterly failed to background-check him and is alleged to have given him a gun as part of his job. The company saw a stock fall of 8% for letting a man described as being ‘obviously disturbed and deeply traumatised’ by his ex-wife serve as an armed security guard for a residential community in Florida. They gave him 28 hours of classroom training and failed to clock that the FBI had investigated him in 2013 after he talked about dying as a martyr and being radicalised at work. He was on a terrorist watch list for a while, just like the Boston Marathon bombers and an attack on an Islamophobic ‘draw Muhammad’ competition in 2015. Both of those were bomb attacks, but if they’d wanted to buy an assault rifle it would have been stupidly easy because most states don’t ban people on watchlists from buying firearms. Oh, and political outlets in the US are already scoffing at attempts to stop people like the killer from purchasing rifles. (TW: See above re: 1,600 uses of the word ‘wanker.’) Despite being shitty, that article does make a good point — like all government bureaucracy, the list is poorly organised and frequently features nothing but names, making it hard to enforce. 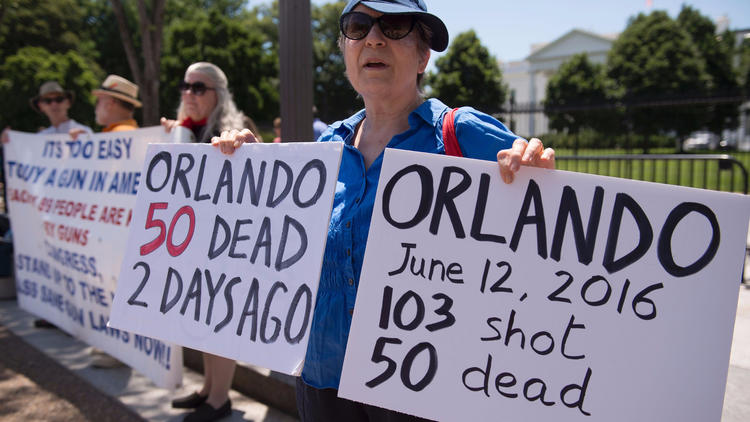 If this seems like more of a disjointed rant than usual, that’s because it is. This one got to me. I’m gender non-binary. I work in a gay bar. I was at work during the shootings, and only heard about them after I left. This was an attack aimed at people like me, my friends, and my co-workers, even more so than the more indiscriminate attacks of the past. That a string of acts of criminal incompetence, corporate neglect, obnoxious pro-gun lobbying, religious extremism and institutionalised, pervasive homophobia led to the deaths of 49 people, makes me hopelessly angry. I’m not American. It’s not my business. Horrendous things happen all over the world all the time — civil wars, homophobic prejudice, and the violence inflicted by the powerful and scared against the weak and different.

If this seems like more of a disjointed rant than usual, that’s because it is. This one got to me.

But this was not an inevitable tragedy. Mateen could not have been permitted to own firearms. He could have been de-radicalised. He could have grown up outside a culture of pervasive hatred, dismissal and violence against LGBT+ people. Some have suggested he was gay, claiming that he was a regular at the club and had been seen on LGBT dating apps. His father is a vehement Afghan Nationalist, who stated that ‘god will punish those involved in homosexuality’ while hastily distancing himself from his son on Monday. The details of Mateen’s life that are emerging are beginning to paint a picture of a deeply unhappy person, unable to reconcile himself with pressures placed upon him from a dozen sources. He killed 49 people, but he was the 50th victim.

So while banning and restricting access to firearms and weapons is entirely necessary, and the NRA receives a well-deserved kicking for their part in this and other tragedies, perhaps the best way to try to stop another massacre like this is to continue pushing the slow wheels of progress, no matter how slowly it turns. The LGBT+ community has come together in the wake of this tragedy, and it’s perhaps most heartening to see posts from LGBT people who met and talked at vigils held for the tragedy, most encouraging to see the diversity of individuals and groups who turned out on a rainy Monday evening in Norwich and in cities across the world. Thousands, perhaps millions of people still struggle with being LGBT+, with feeling abnormal in a world that is so often hostile towards the different.  But the wheels are turning. The world is slowly getting better, and the pace of progress will not stop. One day, nobody will commit senseless violence to change the world or themselves. Until then, stay safe.

Featured image: A man holds a poster depicting a rainbow flag with the message: ‘This is not a white flag’ as he attends a vigil in Hong Kong © Anthony Wallace/AFP via ibtimes