On the 22nd of May, the Oasis-class cruise ship Harmony of the Seas set sail from Southampton docks on its first commercial voyage. The world’s largest cruise ship, the Harmony is owned by Royal Caribbean and can carry up to 5,400 passengers as well as 2,100 crew. The ship will be sailing on various European cruise routes until October, when it moves to the Caribbean for the winter. The vessel resembles a block of brutalist flats with a pointy bit at the front, and rooms can cost up to £3,000 for a seven-day cruise. The industry boomed in the early 2010s and is still going, with over around 22.5 million passengers carried worldwide in 2015 at a profit of somewhere around $39.6  billion.

As you’d imagine, pushing 100,000 tonnes of holidaymakers and water parks around the ocean requires a lot of power. Even just sitting in port, many cruise vessels still run their engines to provide power, and the fuel they burn is unbelievably toxic. According to the Guardian, the Harmony burns 66,000 gallons of diesel per day, and while it uses ‘pollution control systems’ and various new technologies to reduce emissions, it still produces as much nitrogen dioxide as a small town and huge quantities of sulphur and particulate matter. 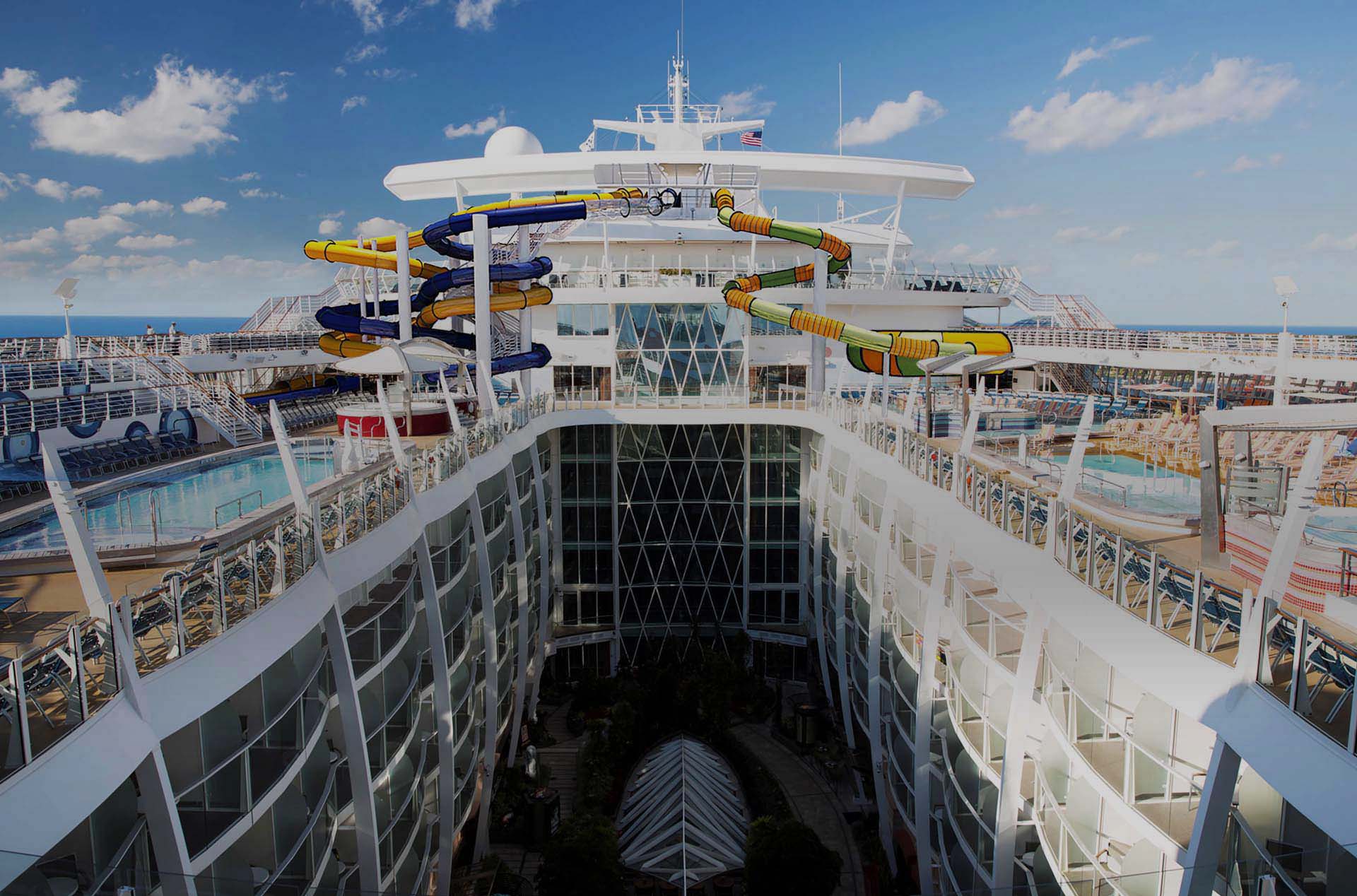 ( Harmony of the Seas © Royal Caribbean )

Many cruise liners burn diesel that contains much more sulphur than Transport and Environment, a Brussels-based environmental watchdog, suggests that commercial shipping dumps 5.8 million tonnes of sulphur dioxide, nitrogen dioxide and assorted particulates into the air every year, and emissions are expected to increase by 40% by 2020. They suggest that this pollution is responsible for 50,000 premature deaths per year in Europe, costing society €58bn in medical bills and other expenses. Most companies, including the Harmony of the Seas, do not hook into the local power grid when they are in port, as it’s cheaper to continue to run the engines.

Alongside exhaust emissions, cruise ships also generate huge amounts of liquid and chemical waste, almost all of which can be dumped overboard in international waters thanks to lax regulations. According to Beachapedia, a 3,000 passenger cruise ship generates vast quantities of grey water, sewage, and oily bilge water, as well as around 50 tonnes of solid waste and a hundred gallons of hazardous toxic waste in a week-long voyage. They also take on vast quantities of seawater as ballast, sometimes discharging it thousands of miles from where it was picked up and potentially spreading invasive species and diseases.

As you’d imagine, pushing 100,000 tonnes of holidaymakers and water parks around the ocean requires a lot of power.

There are regulations aimed at preventing this discharge, but they only apply to specific kinds of waste and usually have a distance-from-shore cutoff point. Furthermore, it’s very hard to check if a liner has been dumping waste at sea, and there are no laws specifying what pollution control measures ships have to have on board. Many ships operate under flags of convenience – Liberia has a massive cruise industry, for example. Cruise ships now regularly pass through the polar regions, bringing tourists to previously untouched areas and causing huge damage to the wildlife and the fragile ice. Popular Science magazine has referred to Arctic cruises as ‘environmental disaster tourism’, noting that such cruises are only possible because the Arctic ice has already melted to the point that previously iced-over waterways have opened up. One of the companies running these cruises also has an environmental record that looks like this.

So your holiday cruise is an environmental disaster area supported by weak regulations and shady business practices. Still, at least the passengers and crew aboard the Harmony can enjoy the cruise once they’re away from pollution complaints in open water, right?

Cruise ships have an extremely unpleasant reputation for sexual assault and a culture of sexism amongst staff and management. According to industry analysts, the risk of assault or harassment on cruises is twice the average on land, with ‘crew members often to blame for assaults.’ Because cruise ships are isolated from any legal system while in international waters, many of these crimes go unreported or are not properly dealt with. Worse, with the cruise industry as paranoid and defensive as it is, passenger or staff complaints are frequently hushed up or mysteriously written off. In 2002, one Dianne Brimble died on the P&O vessel Pacific Sky after an overdose of alcohol and the date-rape drug GHB. (Trigger warnings: Link contains graphic descriptions of sexual assault) She was found in the cabin of another male passenger.

P&O were heavily involved in the investigation, which ended with no prosecutions despite a series of trials. While the company eventually apologised and reached a cash settlement with Brimble’s family, P&O did not suffer any major loss and the Pacific Sky continues to operate in Europe, away from more stringent Australian regulations on safety and security. Other cases have gone un-investigated or unreported, and cruise lines have both a vested interest in keeping them quiet and an astonishing ability to do so.

the risk of assault or harassment on cruises is twice the average on land, with ‘crew members often to blame for assaults.’

Oh, and here’s a PSA/scathing attack article specifically aiming at Royal Caribbean – Harmony of the Sea’s owners. Note how they don’t run background checks on crew hires, they had to be threatened with fines before they’d disclose a list of incidents, and how Royal Caribbean has no established protocol for helping victims during cruises, or ensuring offenders are punished. Additionally, their customer service responds to these complaints by offering discounts on further cruises, and has to be threatened with legal action to go any further. This is one of the largest companies in the industry, by the way, with a 17% share of the market.

And then there’s all the people who just disappear. Sounds like an urban legend (I initially ran across stories on Cracked, of all places) but apparently the number of disappearances has spiked since the turn of the century, with three in 2016 so far and 11 in 2015. Disappearances can happen for all kinds of reasons, including drunkenness or suicides, but foul play is an obvious conclusion to draw. As noted by both Cracked and Cruise Law above, many cruise lines have regularly failed to install even basic CCTV to record people overboard, let alone more advanced systems.

Solving these issues is a question of both industry will and political pressure. Responsible Cruising with smaller lines is sometimes suggested, although even responsible vessels are not immune to internal sexual assault problems or the many other issues listed in that article. Regulations on international shipping continue to be slowly tightened, although there’s still a long way to go and the economic costs of these regulations mean that there will continue to be fierce opposition to efforts to stop cruise pollution. Vote with your wallets. Cruises are fun, and they’re cheap, but the industry is toxic in more ways than one. If you’re going on holiday this summer, don’t go on a cruise.