Last week, Music That Matters looked at the 40th anniversary of punk and how our understanding of its history is typically one which erases the efforts and achievements of women musicians and people of colour. Today, the scene is often still seen as a male and white space, with punk shows frequently having male dominated crowds queuing up to see white men thrashing on guitars in shabby venues.

But it looks like things are changing. 2016 feels like it is becoming a rebirth of women in punk, and critically, as if it is women of colour who often are leading the way. More women are touring, more are getting bigger stages and longer sets, and more are getting the media coverage that they deserve. Among the nostalgic reflection, this year, dozens of punk albums will be released. Some will become instant classics, others will fade from memory as quickly as they came. Here are 10 bands leading the British punk scene this year, and the women that are making them shape the future of the genre. 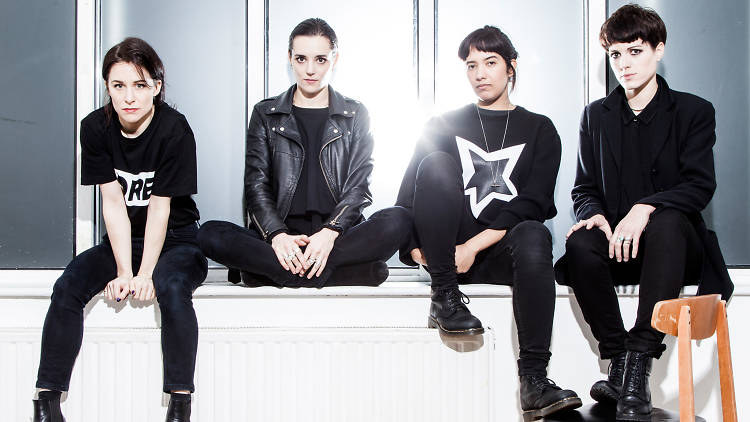 British punk’s year started on January 22nd, with the release of Savages’ much anticipated second album Adore Life. Crossing cleverly between a punk and indie feel, the album, with its at times chilling hopelessness, has broad appeal. It incorporates the very best of a 1980s post-punk feel – the thumping bass lines, the sense of urgency and panic, the wailing vocals that somehow seem to fade to an echo – repackaging it all for a contemporary audience. Many bands have tried it before, but few have managed to hit the combination of eerie gloom and catchy hooks in the way that the original pioneers of the genre did. Savages are one of those bands, and as they spend the rest of 2016 touring the world, including dates in Australia and the US, they look set to take that sound further and further.

Just two months ago, the Sylvia Plath-inspired debut album of Exeter based Muncie Girls was released – From Caplan to Belsize – an emotional record of polished melodic punk. Frontwoman Lande was profiled by Kerrang! Magazine in their ‘ones to watch’ list at the start of the year, they’ve hit the road to aggressively promote the album, along with math-rockers Tellison, and have since been shortlisted as Best British Newcomer for the Kerrang! Awards. Playing bigger and bigger venues, 2016 seems to be the year of their ascent.

From a similar mould, although with a poppier and more explicitly political undercurrent, The Tuts are set to take the music world by storm with their debut album later this year. Having spent the last few years playing shows with an eclectic mix of veterans of the music industry, including The Selecter, Sonic Boom Six and Kate Nash, a gentle splattering of EPs have kept interest in The Tuts high. Writing in The Norwich Radical, member of The Tuts, Harriet Doveton and her sister and fellow Colour Me Wednesday bandmate Jennifer, wrote about how “there’s an effort to keep politics away from the arts, from popular culture and leisure”, something which the pop-punk all-woman three-piece are set about to smash with their growing popularity.

Yesterday was one of those special days. Veterans of the British music scene Sonic Boom Six released their incendiary fifth studio album – The F-Bomb. Having skanked their way across stages and through moshpits for over a decade, their origins lie in the UK ska punk scene, where acts like King Prawn and Capdown led the way. Since then, their sound has been through countless iterations, their line-up shifted, and their politics matured.

Energetic frontwoman Laila K is uncompromising about the politics and the imagery surrounding the album, having discussed extensively the persistent problems within the UK rock scene – “It’s been white middle class lads in the rock scene for a long time now.” Laila has been consistently shaking that up through her work with Sonic Boom Six and The F-Bomb demonstrates this perfectly. Opening track and lead single No Man No Right is a feminist anthem, From the Fire to the Frying Pan takes on the far right, and Joanna is an upbeat trans solidarity song. Relevant, needed and timely, Sonic Boom Six are as important and explosive in 2016 as they ever have been.

One of the best bands to emerge out of Birmingham for a while, Okinawa Picture Show play a dynamic and catchy pop-punk sound. Featuring former members of Ace Bushy Striptease, they’ve become a staple part of the burgeoning underground pop-punk scene that’s been bubbling across the country for a few years. Sharing a stage with T-Shirt Weather, Middle Ones, Martha, Radiator Hospital and many more has helped to spread the word, and with their debut album recorded and ready for release later in the year, 2016 will see the coming of age of one of the most exciting acts on the underground.

Perkie has been making waves in the punk scene for a while. Currently fronting Autonomads, she previously sang in the now defunct Resolution 242 and had a brief stint in The King Blues. But it is her solo work that is arguably the most innovative and exciting. Often reminiscent of the early work of the likes of Kate Nash and Lily Allen, Perkie combines catchy pop songs with a punk aesthetic, sensibility, and ethic. Never-ending live shows and the drip feeding of the occasional split and single are teasing the potential for a new full-length album – which would be the perfect addition to 2016’s record collection.

In Evil Hour are a refreshing return to stripped back melodic hardcore and they’re on the rise. Last year saw the release of the brilliant Built on Our Backs EP and plans are in the works for recording their second full-length album later in the year. Shows in the diary include a plethora of festivals and a London show with the legendary Leftover Crack. Merging their piercing screams and thumping riffs with a scathing attack on politics and society, In Evil Hour are an important voice on the music scene, and 2016 looks set to be their year.

If you’ve ever visited Durham, at first glances, it would seem antithetical to suggest that it would be a major site of influence for contemporary punk rock. But it is the twee University city surrounded by former mining villages that has produced some of the most important and interesting music over the last decade. The band at the forefront of this is Martha – the garage rock influenced pop-punk four-piece. July will see the release of their second studio album, which will undoubtedly bring more of what they are renowned for – simultaneously clever, humorous and heart-breaking lyricism and storytelling alongside addictive hooks and melodies. The songs released in the run up to album – Goldman’s Detective Agency and Chekhov’s Hangnail – show no signs of disappointing.

Naomi from Martha has another band – the all-woman five piece No Ditching. Over the last few years, they’ve put out the occasional EP with little fanfare. In April 2016, a split with American band Baby Ghosts emerged. Rawer and slightly less aloof than Martha’s music, the three tracks on this split show the potential of No Ditching, and more touring and studio time for them could see the building of yet another inspiring and important project from the spiritual homeland of contemporary British pop-punk.

Screeching their way into the ears of punks up and down the country, Petrol Girls’ post-hardcore rage is about to blow up. Unashamedly political, their sound is aggressive, brutal, and unapologetic. Treading Water, lead single from the forthcoming album, is a sign of things to come – loud, brash and disjointed but with a political and musical coherence that place them firmly at the forefront of the scene in 2016. Innovative and energetic, Petrol Girls could be the band that shapes punk music this year more than any other.