Until 2013, the DSM (Diagnostic and Statistical Manual of Mental Disorders) incorporated a ‘bereavement clause’ into the criteria for major depressive disorder, excluding patients from a diagnosis of clinical depression if they suffered bereavement in the last two weeks. Put simply: if someone you love has just died and you cry all day and can’t eat and everything is terrible — well, that’s a healthy and expected response which we call ‘grief’. The removal of the clause by the American Psychiatric Association was contentious, with accusations made that psychiatrists were trying to ‘medicalise’ mourning. One commentator called it the most controversial decision since the removal of homosexuality from the list of psychiatric disorders in 1973.

For me, this illustrates a lot of pertinent questions about how we think and talk about mental illness. What does mental wellness look like? How do we draw the distinction between the normal fluctuations of a healthy mindset and ‘pathological’ functioning? Does having the authority to categorise what mental states are ‘normal’ give psychiatrists social and ideological influence beyond their remit?

We don’t politicise our mental health, but it’s about time we started to

Mainstream discourse around mental illness is largely apolitical and doesn’t provide a critical framework with which to tackle these questions. From 16th to 22nd of May there will be plenty of great stigma-breaking discussion and education in honour of Mental Health Awareness Week, but something will be left out of the conversation. We still don’t talk much about exhaustion and alienation and how they contribute to workplace stress, or the links between poverty and mental illness. We don’t talk about the psychological effects of ever-diminishing social safety nets. We don’t politicise our mental health, but it’s about time we started to. I propose the following four reasons why a radical perspective is necessary if we are to have any sort of honest conversation about mental health this week.

It questions the biomedical model of psychiatry, which holds that mental illness is the result of chemical imbalances in the brain and locates the source and treatment of it in the sufferer (through anti-depressants or cognitive behavioural therapies). This places the cause and solution of ill mental health firmly in the realm of the individual and ignores the potential influence of wider social and political issues. In austerity-ridden Britain, it is important to situate the mental health of individuals in the context of increased economic inequality and precarity. Homelessness, for example, has more than doubled since the Conservative government took power in 2010, and the two-way link between mental illness and homeless is a firmly established fact; up to 32% of people who sleep rough also suffer from a mental health disorder. 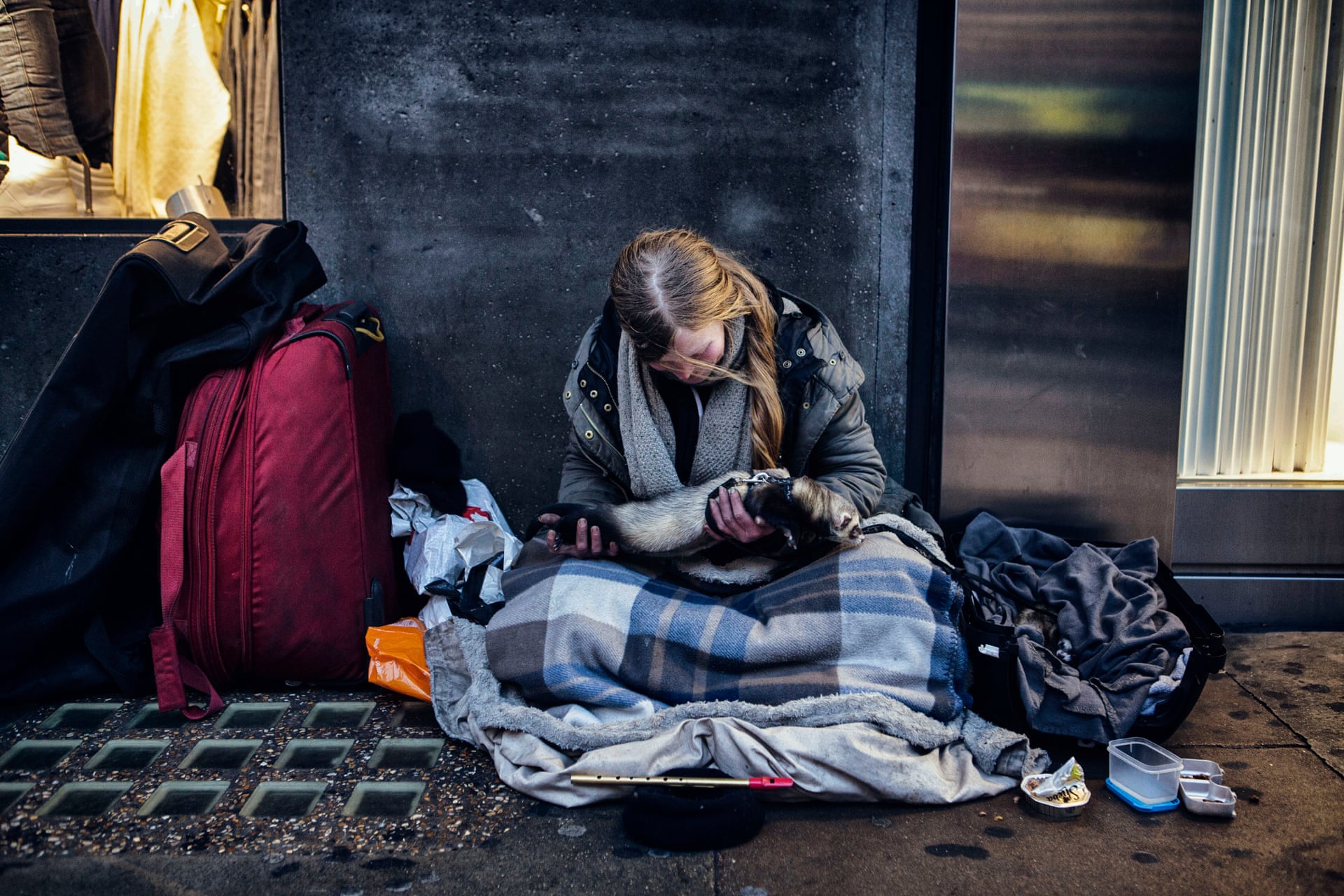 (Jane, with her polecat, Troy, homeless on Oxford Street © Antonio Olmos for the Observer via The Guardian)

Not knowing whether you’ll have a place to sleep, enduring the shame and stigma of unemployment and struggling with longer working hours and ever-increasing workloads are facts of life for many people under neoliberal capitalism. By failing to discuss and politicise the psychological damage these things inflict on us, we maintain a culture of silence, shame and self-blame.

2. Radical mental health calls for new ways of talking about illness and wellness.

It recognises that there is no idealised ‘normal’ mental state and questions the medicalised language we use to discuss neurodivergence. This does not suggest that mental illness isn’t ‘real’; rather, that the words we use to talk about mental health can isolate sufferers, dismissing their subjective experience of reality as a state of ‘sickness’. It is true that medicalised language has been a powerful tool for breaking down stigma and taboo. But we should be able to practice compassion and understanding without having to emphasise that a person’s pain and suffering is as valid as that of someone with a physical illness. If we adopt new ways of talking about mental illness and start thinking beyond the binary distinction between ‘sickness’ and ‘wellness’, then identifying who ‘counts’ as mentally ill becomes much less important than emphasising compassion, non-judgemental support and self-determination for all.

There are many compassionate and committed professionals working in mainstream mental health care and these people are not the enemy. Radical mental health is not inherently anti-psychiatry, but it is about questioning the doctrine of formal ‘expertise’ and focusing on the voices and experiences of neurodivergent people. Psychiatry is inevitably shaped by violent and oppressive power structures. ‘Diagnosis’ and ‘treatment’ have historically functioned as tools by which marginalised groups have been excluded and punished; consider the confinement of non-conforming ‘hysterical’ women, or the electro-shock torture of gay men. Radical mental health acknowledges the danger of authoritarian and paternalistic approaches to psychiatry and emphasises autonomy, choice and inclusion for all. One unavoidable consequence of the brutal and unjust cuts to mental health services is that mainstream sources of support are increasingly hard to access. Front line mental health staff are forced to become gatekeepers of treatment, quantifying human suffering to determine who is most in need of help.  Imagine the potential for psychological damage to a person who is denied treatment, with the implication that they’re not ‘ill enough’ to access support they desperately need. The cuts in Norfolk and Suffolk have already had tragic consequences, with ‘unexplained deaths’ continuing to increase. While acute mental health services are vitally important, their continued decimation by austerity makes it even more crucial to establish alternative support structures.

Radical mental health values alternative coping mechanisms like peer support, open dialogue, mutual aid, activism, community action and creativity. Access to these is not dependent upon using a diagnostic criteria or fitting a certain standard of need. They are not administered by professionals and they don’t cost much, if anything. They are about developing communities and networks of support. At their most basic, they are about taking care of the people around you — something we all need now more than ever in austerity Britain.

One thought on “RADICAL MENTAL HEALTH, AND WHY WE NEED IT NOW MORE THAN EVER”