With just over six weeks to go until the referendum on the UK’s membership of the European Union, the Remain campaign has two considerable problems. Firstly, the EU is so flawed, so bloated and undemocratic, in the eyes of virtually everyone, that it is very difficult even for those who will be voting Remain to get truly excited about it. Secondly, at the head of the campaign is David Cameron, a man so universally disliked by people of all political persuasions that it is a miracle he continues to cling to power.

There is very little in the lead Remain campaign to offer hope or inspiration to anybody. The three key points on the home page of Britain Stronger in Europe read #Better Economy. Better Leadership. Better Security’, which, reading between the lines, might be interpreted as follows: “We’ll make sure Britain keeps consuming the world’s resources at an unsustainable rate, while ensuring all the resulting wealth is concentrated at the top. Oh, and we’ll see to it those dirty foreigners don’t get their hands on any.”

I came closest to considering voting to leave when I read the ‘Stronger In’ leaflet that came through my door;  so it was a relief when I encountered the Another Europe is Possible campaign, the ‘radical in’ movement that wants to see the UK stay in the EU in order to reform it. The campaign attempts to cover two different facets which are sorely lacking in the mainstream Remain narrative: criticism of the EU as it stands, and a genuinely inspiring vision of what it could be. 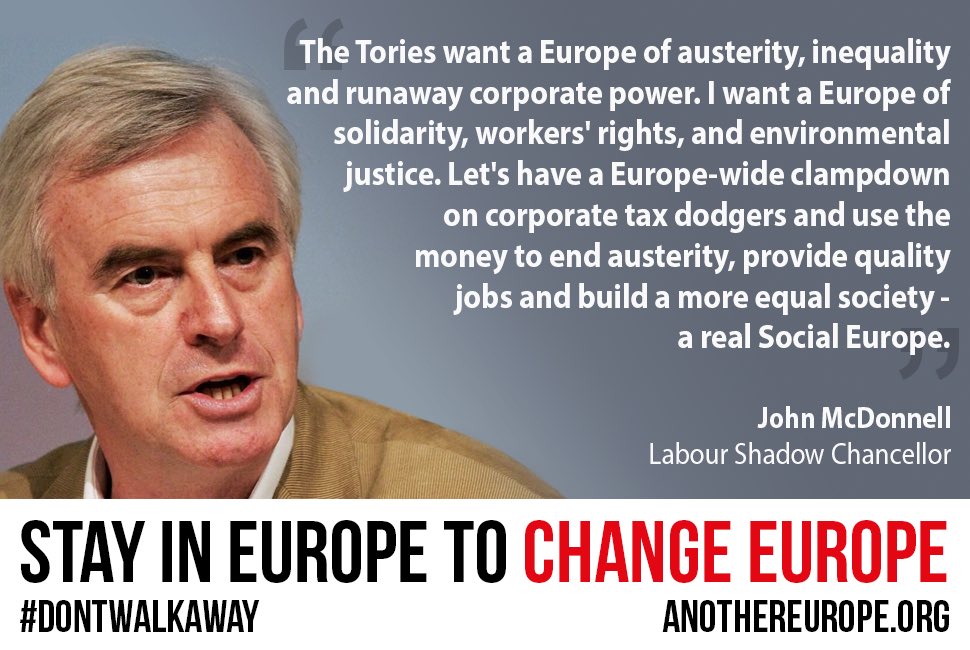 Dr Marina Prentoulis, a prominent UK representative of Greece’s Syriza, Lecturer at the University of East Anglia and now a spokesperson for Another Europe is Possible, speaks scathingly of the Stronger In campaign. “I find it very unconvincing, It is designed on a conservative basis, what is best for businesses and so on. There is no suggestion of how we might change these institutions for the better. And it’s very uncritical of the European Union, which I don’t think you can do after what we’ve seen, not only with Syriza but with how they’ve dealt with the economic crisis, how they’ve dealt with the refugee crisis. People won’t accept something so uncritical.”

It is a peculiar feature of referendums that they often create improbable alliances. The strangest of the EU campaign so far has surely been the co-authored article by David Cameron and Brendan Barber published in The Guardian last week. It is unclear who this article was supposed to persuade. Those concerned about workers’ rights will presumably not fail to notice that it is Cameron himself who is preparing to rip up those rights if we leave – so why should they believe he is suddenly on their side?

There is a widespread feeling across the political spectrum that we are being taken for fools – and we don’t like it.

There is a widespread feeling across the political spectrum that we are being taken for fools – and we don’t like it. Another Europe is Possible is fighting to undo some of the damage done by Stronger In Europe’s unpalatable cheerleading. But if the ‘radical in’ campaign accepts that the EU is a mess, what does it actually want?

“For one thing, the European Parliament does not have as much power as we would like it to have,” says Prentoulis, “though we should not forget that the parliament is also dominated by conservative parties.

“The EU is dominated by a neoliberal agenda, and sometimes they try to impose neoliberal policies which go against even some of the foundational treaties of the EU, which were based on solidarity.

“There is also a major issue of transparency. We have seen with TTIP how the negotiations are not made public, how public involvement and access to information is blocked and manipulated, so transparency and democracy would be a big thing.”

Ah yes, TTIP. The shady US-EU trade deal has been a focal point for many left-wing Brexiters, but Prentoulis is adamant that they have missed the point. “TTIP is a very dodgy deal and it’s going to destroy a lot of the public sector that we have and leave a lot of people unemployed. But for this reason I think we have to stay in and try to fight so that TTIP doesn’t go ahead. If Britain leaves the European Union, in all probability we will have bilateral agreements, which will be in favour of international capital; and in that case, disputes won’t be settled by the European Court of Justice, but by tribunals under the investor-state dispute settlement, which will be even worse – courts that have no sense of justice, filled with international corporation lawyers.

“I think a lot of people on the left are trying to have a Leave position, but they have no clear strategy for the future. They offer a vision of how Britain would suddenly become a socialist country by exiting the EU, which is at best naive.”

“I think a lot of people on the left are trying to have a Leave position, but they have no clear strategy for the future”

There is evidence for this view in the pro-Brexit stance of the Socialist Party and Socialist Workers Party. Both state that Brexit may force the Tories from power, with an article on the Socialist Party’s website going so far as to argue that “a Jeremy-Corbyn-led Labour Party could come to power”.

This is the stuff of pure fantasy, not least because Labour’s position is much more pro-EU than that of the Tories. Brexit is still mostly associated with UKIP, and it would be far more likely to play into their hands than Labour’s.

Equally, a Remain vote would not mean victory for the aims of Another Europe is Possible; but, argues Prentoulis, it would allow a burgeoning grassroots campaign to continue to build. “A lot of people started to unite around the Greek situation,” she says. “I think we are still at the beginning of these processes, but the Syriza government and the Greek situation opened the discussion and we started to see more people come together at the grassroots level – in Portugal, in Spain and elsewhere.

“To make a difference in the EU, I think we need to make these links much stronger. This is especially the case with Britain, which has always kept at a distance from ‘the continent’, in terms of how British people perceive their identity. We need to go on creating a pan-European movement, especially around TTIP, for example; and we will have to then link it to more formal politics, whether it’s on the national or the transnational level.”

It’s certainly an ambitious project. For now, convincing the people of the UK that they share in a common European identity is a big enough challenge. “If you look at how the European Union is communicated in Britain,” says Prentoulis, “it is always – I’m talking mainstream media here – from a position of us and them, and this has always been accepted as unproblematic, Britain always having this distance from the European people, the European institutions, and so on; and suddenly you have to cover this space in very little time.”

Can it be done? “I think we will probably vote to remain, but maybe for the wrong reasons. Rather than giving into this rhetoric of fear, especially from the Tory party, I would like to see people say ‘no, we are voting to stay because we understand ourselves as part of the European Union and of Europe more generally, and we are there in order to fight for it.’ If we vote to remain, we cannot simply stop thinking about it the day after. We need to start thinking: about how we will go about coming together, trying to stop TTIP, trying to change the institutions, make it more transparent and more democratic.

2 thoughts on “WHY ANOTHER EUROPE IS POSSIBLE: INTERVIEW WITH MARINA PRENTOULIS”