From #oscarssowhite to #rhodesmustfall, a spotlight has been shone on the lack of diversity and positive representation for POC across numerous institutions. Although these discussions have been catalysed in online spheres, the implications of these hashtags reference the real experiences of silencing and downplaying the importance of solidarity among BME (Black and Minority Ethnic) people — particularly in student environments.

In 2015, the Institute for Fiscal Studies (IFS) conducted a study that suggested more BME students as opposed to White British students were enrolling in university — despite statistically ‘underperforming’ in academia. A general consensus made by researchers was that students from minority households have higher aspirations regarding education than their white counterparts, even with the increase made to tuition fees and the potential privatisation of student loans at hand.

Although the financial strain that BME students encounter often hinder the university applications, controversial methods such as affirmative action has led to the 30% percent rise of poor black students applying for university courses in comparison to 13% of poor white students. With more minority students obtaining first class or upper second class degrees, their success as well as their hindrances are not proportionally represented beyond student societies and unions. As suggested by the aforementioned hashtags, BME student voices are now taking it upon themselves to voice their concerns.

In January 2016, Oriel College, Oxford made the decision for the statue of imperialist Cecil Rhodes to remain, despite a local-turned-international ‘Rhodes Must Fall’ campaign. Chris Patten, the chancellor of Oxford University, went on record saying that its removal would bring about financial loss for the college, but more importantly, that students who wish for it to be removed should “think about being educated elsewhere.” 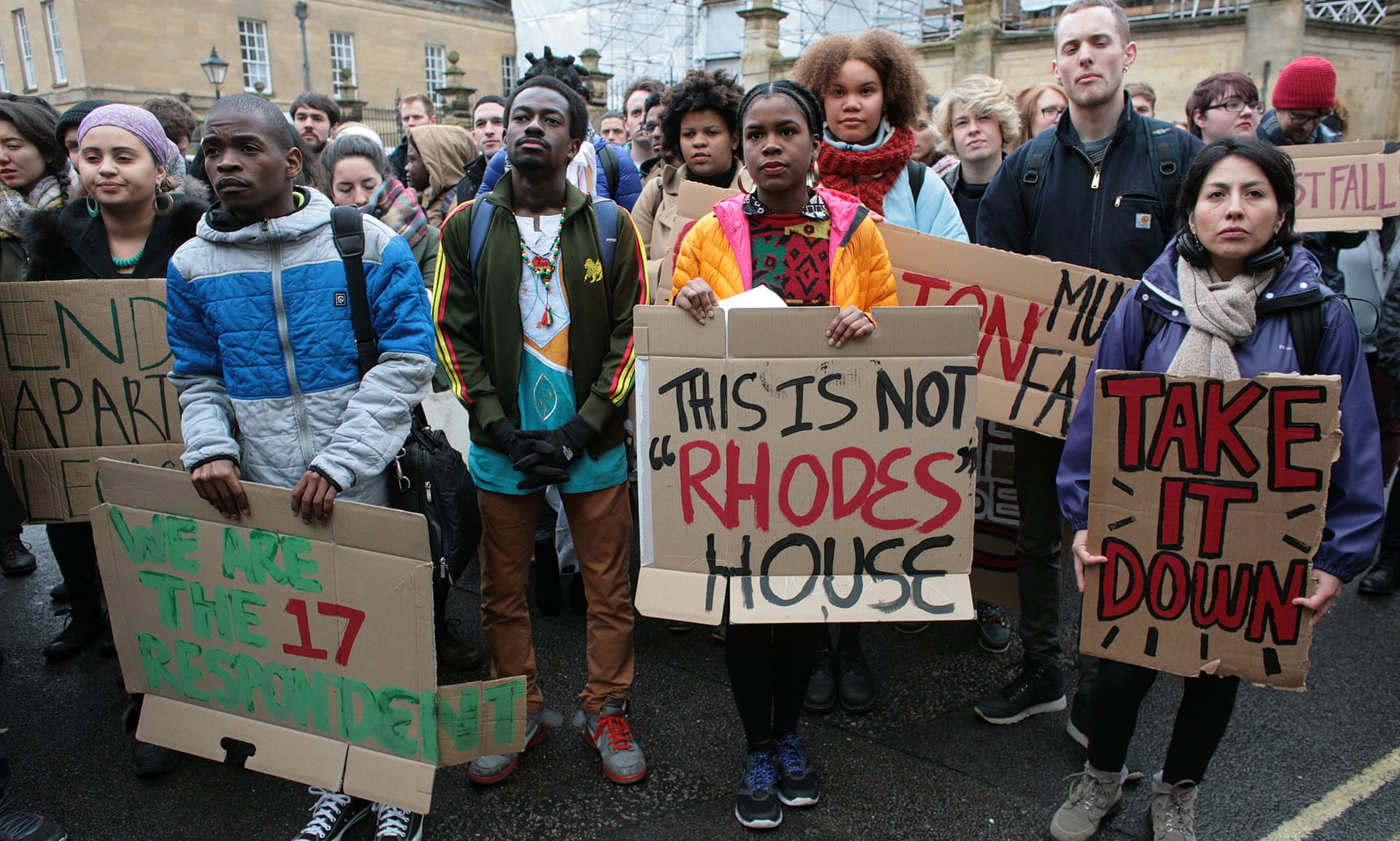 (© Martin Godwin for the Guardian)

The response to Patten as well as the ruling decision saw the campaign spread to countries such as China and South Africa. The movement itself became a great symbol of BME and non-BME students rallying together, garnering much national news coverage. In a recent article, one student wrote:

“Believing that people of colour should be grateful for colonialism plays into even more subtle forms of racism, ones that put Western standards of living at the top of a cultural hierarchy […] Britain was built off of the empire and to suggest people of colour living in Britain have benefited from it is ignorant at best.” (Amit Singh, Consented, April 2016)

Oxford University is no stranger when it comes to dealing with its colonial past. However considering a large number of BME students who were part of the campaign were also recipients of the Rhodes scholarship, it highlights whether or not there are safe spaces for BME students on campus, especially when their education is still governed by racist programmes? Furthermore, when we look at the statics of BME in teaching positions, a 2015 study by the Runnymede Trust found that there were only 17 Black female professors in British academic institutions; 92.4% of professors were white and only 0.49% of professors were black. Dr Omar Khan, the trust’s director went on to say:

“The obvious question is – if the racial inequalities persist across every measurement of outcomes in higher education, will black and ethnic minority students continue to pay £9,000 a year for a much poorer experience than their classmates?” (Richard Garner, The Independent, February 2015)

Interests such as these have led to formations of BME groups. Online forums such as ‘Why is my Curriculum so White?’ or ‘Preventing Prevent’ have carved a self-governed path for BME students to share and utilise their own resources as means of not only educating themselves but to inform non-POC of the issues BME students still face. By this stretch, UEA in January saw the formation of the Womanist Society —  a society that deals with a branch of feminism that caters to the politics of race and gender as a whole as opposed to simply gender inequality. Alongside the calling out of racist institutions on Twitter, more self-published articles, books, and zines regarding Womanism and BME/POC rights have become increasingly popular among students, but not without retaliation.

The introduction of the Womanist Society faced much criticism, largely on the level of its necessity when the Feminist Society, Afro-Caribbean Society and Women’s Caucuses have long been established. Whereas these are notable concerns, it is important to note that when you are a part of an institution that primarily caters for you, being aware of someone else’s needs becomes increasing unlikely. Much care and consideration has gone into representing the voices of other minority groups on campuses. UEA wonderfully set up the gender neutral toilets, sexual awareness campaigns and women’s week and rightfully so; but the majority of these concerns fall under the umbrella term of the LGBT community or sexually related concerns and not racial narratives.

In a time where young black school children are being expelled for wearing their natural hair, or Black undergraduates having their property tarnished with racial slurs, greater action is needed regarding BME students who contribute much to these institutions. It seems quite odd that a Union which prides itself on inclusivity, are still not allocating enough (or any) delegate spaces for Women of Colour or even disabled women.

In a space that is meant to celebrate the diversity of a multi-cultural and multi-faceted society, the lack of BME staff, BME orientated courses or BME social platforms, could lead, (and I hope), to an increase in more students taking it upon themselves to support their own in the face of slow-growing help.

One thought on “EDUCATION AND COLOUR: THE IMPORTANCE OF BME STUDENT COMMUNITIES”