In February The Norwich Radical carried an article by Chris Jarvis entitled ‘How I fell out of love with Peter Tatchell‘. This is Tatchell‘s reply.

A reply to the sectarian distortions of Chris Jarvis.

The future of progressive politics is under threat, again. But this time from the left. Historically, socialists and greens have made gains by building broad alliances around a common goal, such as the campaigns against the poll tax and the bombing of Syria. We united together diverse people who often disagreed on other issues. Through this unity and solidarity, we won. The government of the day was forced to back down.

Nowadays, we are witnessing a revival of far ‘left’ sectarian politics and it is infecting the Green Party too. Zealous activists, seemingly motivated by a desire to be more ‘left’ and pure than rivals, are putting huge energy into fighting and dragging down other campaigners.

The issues many of these sectarians highlight are not the mega crimes of mass murder in Syria and Yemen, fuel poverty, unaffordable housing, global hunger, climate destruction or transphobic and racist violence. They prefer to hound fellow activists. Good people are being forced out of the progressive movement by hair-splitting, holier-than-thou ‘left-wing’ puritans. Their dirty tactics of smears and false accusations are borrowed from the far right, and have a whiff of McCarthyism.

Good people are being forced out of the progressive movement by hair-splitting, holier-than-thou ‘left-wing’ puritans.

Lenin once wrote a pamphlet called Left-wing communism, an infantile disorder. If he was around today he’d probably add a new chapter about the ultra ‘lefts’ who are sabotaging socialist and green politics with their destructive in-fighting.

(The Red Scare and McCarthyism mural, The Great Wall of LA © SPARC)

The often dishonest, poisonous, aggressive tone of the current wave of sectarian attacks is a total betrayal of the ethics of comradeship that are supposed to be green and left values. People’s good intentions and long radical commitments are dismissed, even ridiculed; often over minor disagreements and sometimes based on distortion and fabrication.

The far right rarely receives the hatchet jobs that sections of the ‘left’ do on their own people who fail to follow the ‘correct’ party line.

These tactics are not only cruel to the individuals who are targeted, they also weaken progressive politics and drive good people away, which strengthens the political right and the power elite. As a left-wing green committed to securing radical social change, this destructive behaviour concerns and disturbs me.

The often dishonest, poisonous, aggressive tone of the current wave of sectarian attacks is a total betrayal of the ethics of comradeship that are supposed to be green and left values

Many progressive people and organisations have been victims of this low politics, including the Iranian communist and feminist, Maryam Namazie and activists in student Atheist Secular and Humanist Societies, who have be falsely accused of racism, anti-Muslim prejudice, neo-colonialism and worse.

A classic example of this dirty ‘left’ politics is the article by Chris Jarvis (Norwich Radical, 17 February 2016).

It is a savage, untruthful attack on my human rights campaigns.

I have no objection to criticism, providing it is factually based and not made up. Just because I’ve been campaigning for nearly half a century does not mean that I should be immune from criticism. My sole objection is to the torrent of untrue allegations.

I am challenging this sordid, baseless ‘left-wing’ political criticism, not only for my own sake but also for the sake of the many honourable activists who have been similarly smeared and traduced by ‘left’ sectarians.

Jarvis starts off by praising me as once being “one of my political heroes” whose “continuing radicalism throughout his long career….at the forefront of radical direct action, and progressive movements” had him “in awe.” 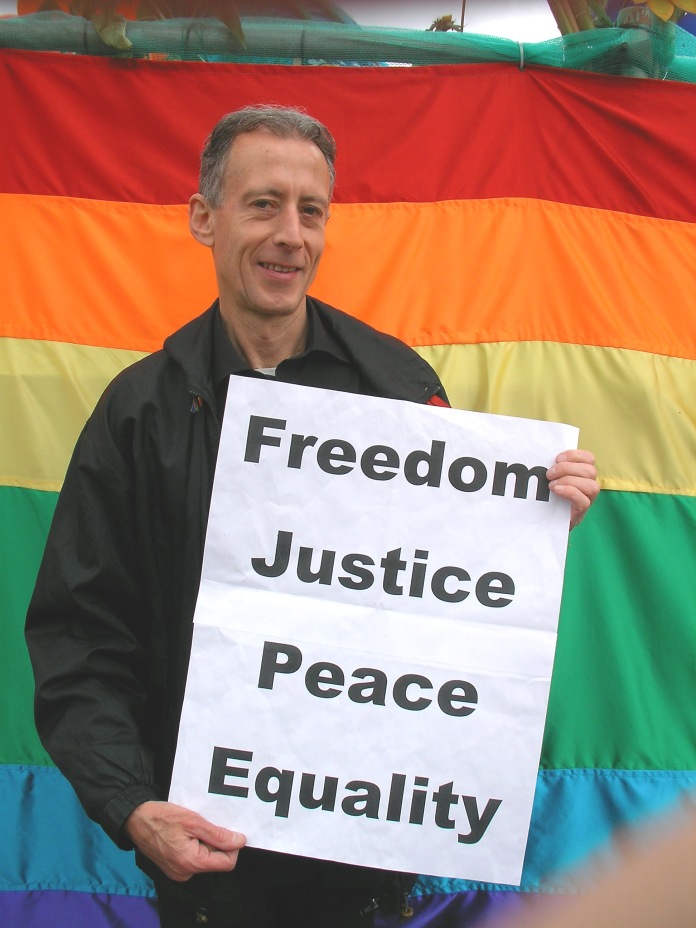 But then the article swiftly switches to denunciation, based on a mix of fabrication and distortion.

The article cites three ‘crimes’ I have allegedly committed and on this basis dismisses my 49 years of human rights activism: “I can’t continue to view you (Peter Tatchell) as an icon of liberation, or a hero of LGBT people,” Jarvis wrote. Welcome to the ‘left-wing’ world of ‘three strikes and you’re out’. A lifetime of humanitarian endeavour now counts for nothing. No mercy, no compassion, no forgiveness.

Just because I’ve been campaigning for nearly half a century does not mean that I should be immune from criticism.

Worse still, my three alleged crimes are ugly misrepresentations of the facts.

Jarvis wrote: “The Stop Murder Music Campaign erred on the edges of problematic, as white, westerners argued and campaigned aggressively against black reggae and dancehall musicians’ right to perform and record music.”

This is pure fiction. The campaign was initiated with the Jamaican LGBT group J-Flag at their request. In fact, myself and the UK-based LGBT group OutRage! were, initially, the only non-Jamaican organisation to respond to their appeal. The people who now denounce me, failed to lift a finger. No solidarity at all.

In Britain and other Western countries, Stop Murder Music (SMM) was not a “white Westerners” campaign. It was multiracial here, and in the US, France and so on. Key UK activists were black: Ted Walker-Brown, Simon Nelson, Rob Berkeley and Dennis Carney. Yet critics like Jarvis write them out of the story. They invisibilise black activists. Who’s being racist now?

Welcome to the ‘left-wing’ world of ‘three strikes and you’re out’.

Jarvis claims that SMM “campaigned aggressively against black reggae and dancehall musicians’ right to perform and record music.” More fabrications. SMM was not directed against all reggae and dancehall singers. It was solely against eight artists because were inciting the murder of LGBT people in their lyrics and public statements, which is a criminal offence.

This is junk worthy of the lying right-wing US Senator Joseph McCarthy. I said the exact opposite to what Jarvis claims: that aid should not be cut.

Why did he misrepresent my news release on this issue, which documents my exact words?

This is typical of my ‘left-wing’ critics. They never quote from first-hand sources, preferring to rely instead on someone else’s distorted account. They ignore my news releases and articles which show what I actually said – because it doesn’t fit their fantasy narrative that I am a racist colonialist.

2 thoughts on “THE NEW ‘LEFT-WING’ MCCARTHYISM?”