“The army has an assassination list of 18 wanted human rights fighters with my name at the top. I want to live, there are many things I still want to do in this world but I have never once considered giving up fighting for our territory, for a life with dignity because our fight is legitimate. I take lots of care but in the end, in this country where there is total impunity I am vulnerable…when they want to kill me, they will do it.”

In the early hours of Thursday 3rd March 2016 in La Esperanza, Honduras, an unknown number of assailants broke into the house of environmental and human rights campaigner Berta Cáceres and killed her. The only witness to the crime, Gustavo Castro Soto, a Mexican national, has been denied permission to leave the country with a 30-day immigration alert put in place against him. According to Global Witness, at least 109 people have been killed between 2010 and 2015 in Honduras, all with links to campaigns against a number of projects, including mining, logging and dams. 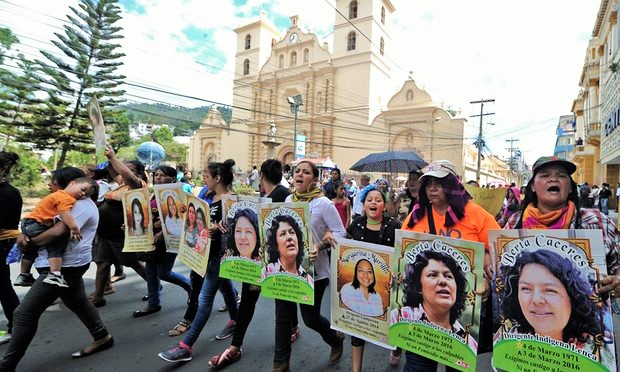 Cáceres had been involved in defending the land of the indigenous Lenca people against the Agua Zarca dam project in Rio Blanco, whose consortium is made up of the regional development bank Banco Centroamericano de Integration Economica, the Dutch bank FMO, Finnfund and the Voith-Hydro (Siemens) partnership from Germany. The International Finance Corporation (part of the World Bank) and Sinohydro pulled out of the project in 2013 because of the conflict. The project risked denying the Lenca people access to the Gualcarque river, considered sacred by the Lenca people and a major source of food and water.

Berta Cáceres embodies a shining example, of someone who was prepared to put everything on the line for the good of others.

It is most likely that the killers will never be found and those who sent them will never be brought to justice. Gustavo Soto, when interviewed by police, has only ever been shown pictures of other activists from meetings and marches. It is clear that the police have no real desire to find the killers and may well even look to frame others. Corrupt and on the payroll of industry, the Honduran government officials and police act with virtually no risk of retribution. 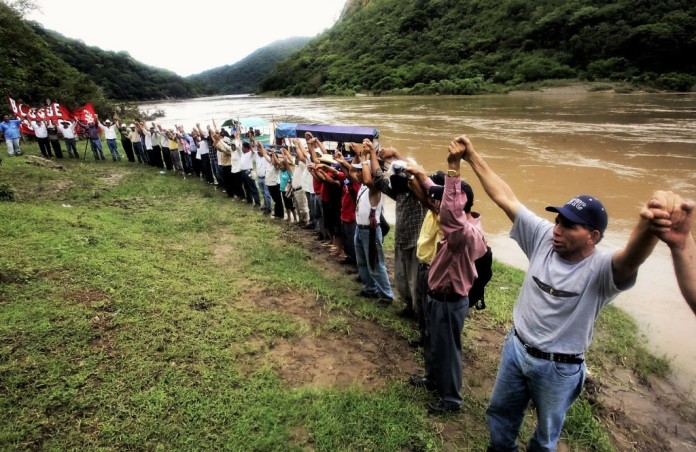 A Global Witness report shows that of the 908 environmental activists murdered in the past 10 years, only 10 of their killers have been brought to justice. This kind of pattern can be seen around the world. Unilever recently settled a dispute over dumping toxic waste from a thermometer factory in India, allegedly responsible for the deaths of over 50 people and disorders and illnesses in many others. No one at Unilever has been charged with a crime. In 2013, Wal-Mart agreed to pay $81.6million for improperly disposing of hazardous waste and pesticides. No one was charged with a crime. In 2010 Goldman Sachs paid $550million to settle charges of misleading investors in a subprime mortgage product. No one was charged with a crime. In 2013, Transocean Deepwater Inc agreed to pay $1.4billion in fines for violating the Clean Water Act for its part in the Deepwater Horizon disaster. No one has yet been convicted.

While corporations poison and pollute the environment, hire gunmen to kill campaigners and use any loophole to dodge taxes and other forms of responsibility, they are simply charged a fine they can easily pay and allowed to go on and commit the same crimes somewhere else. Meanwhile, those who protest these actions are fined, threatened with prison time or worse pay with their lives. The Heathrow 13 risked prison time for fighting against a proposed expansion at Heathrow airport. In 2014, Yevgeny Vitishko, a member of Environmental Watch on the North Caucasus and vocal critic of the Sochi Winter Olympics and the environmental damage caused, was jailed for 3 years for spray-painting a fence. Tomas Garcia was shot dead by a Honduran soldier while protesting against the same hydroelectric dam that Cáceres was fighting against.

What should change? Increasingly, right-wing leaning state and corporate owned press and media scold those for reacting on a physical level to the actions of government. This is just one of many tactics used to reduce the effect of anti-establishment action yet the truth remains that marching and petitions are not enough on their own. More direct action is needed. This is not to say that violence is the answer, but different actions and methods are going to be needed to make those in power pay attention; because everything that has been done so far has made very little difference. There are activists who rejoice at small victories and say we should be thankful for those but it just isn’t enough. Wholesale change is needed, it must happen if the attitude of the establishment is to change. There is no point seeking help from the police or the military. Police corruption is rife everywhere while the military just take orders, after all, they were created to protect and carry out the wishes of a government and its wealthy powerful benefactors.

While corporations poison and pollute the environment, hire gunmen to kill campaigners and use any loophole to dodge taxes and other forms of responsibility, they are simply charged a fine they can easily pay and allowed to go on and commit the same crimes somewhere else.

The price for environmental activism is getting higher. Peaceful marches are often greeted with violence, usually in response to alleged acts of violence committed by, many suspect, undercover law enforcement agents. A new wave of government legislation around the world is clamping down on protesting. In India, the government called Greenpeace ‘anti-national’ while in China, NGOs are required to register with the police and must get approval for their activities. Terrorism is used as a justification, such as at the Paris climate conference or in Cambodia if activities ‘jeopardise peace, stability and public order or harm the national security, national unity, culture and traditions of Cambodian society’.

Yet this does not discourage action. Berta Cáceres embodies a shining example, of someone who was prepared to put everything on the line for the good of others. There are many others like her and we must share their stories before the corporate state is able to eliminate them any way it can.