In the post-imperialist Western world, liberal society is becoming ever more self-aware of social and cultural sensitivities, most evidently in the influence of the arts as a vehicle for perceptions of race, gender, sexuality and culture. Cultural appropriation is a topic hotly debated, and one where the divide between appropriation and appreciation can sometimes be uncertain. This ambiguity and subsequent argument is usually tied to power relationships, dichotomy in stereotypes (e.g. black hairstyles being perceived differently on white heads) and most often, the struggle for the appropriated culture to control its own identity.

The struggle for Roma to self-determine their own public identity — that being which is perceived by those outside of the Romany community — has historically been dominated by stereotypes of the ‘Gypsy other’. These myths, biases and often outright lies likely stem from the Middle Ages with arrival of the Roma in Europe. In an age of relative racial homogeneity, the Roma appeared as a foreign, outsider race whose dark countenance was associated with evil in a time of church hegemony and bigotry. The associations forged with the Roma during their early arrival were compounded by subsequent centuries of persecution and hatred, often based on conceptions of ‘the Gypsy other’ rather than interactions.

Thus the modern era dawned with stereotypes of Gypsies being wider ranging and more complex than ever before. Recent portrayals which confuse Roma with Irish Travellers, White circus travellers and virtually any itinerant group of the last hundred years have resulted in ‘the Gypsy’ representing a plethora of stereotypes which, even historically, were never associated. Often influenced further by local and national stereotypes, the modern ‘Gypsy other’ is perhaps more multi-faceted than at any other point in history.

(Local Roma and their sympathizers march with a banner reading ‘Roma Pride Day’ to demonstrate against racism and discrimination that the community faces in Europe, in Budapest, October 19, 2014 © AFP/Attila Kisbendek)

In popular perception and in film and literary clichés, there are two overriding stereotypes of ‘the Gypsy’ which are utilised often simultaneously and in various modes. These being: the dirty scoundrel, and the romantic free spirit.

The Gypsy scoundrel depicts a character built upon years of distrust between the Roma and non-Roma communities. The essential premise is that the Roma are a vagrant race of thieves, con artists and free-loaders; materially poor by ethnicity and obsessed with the acquisition of capital at the expense of others. It attaches such traits to the very ethnic character of the people, as intrinsic to the race as their skin colour, language or facial features. The common element connected to this notion is that of uncleanliness, both in a theoretical and physical sense. Gypsies are a dirty, ugly race who live in material squalor, as well as being repulsive on a more abstract, emotional level.

Indeed, this is a theme common to many racial slurs; both Gypsies and Jews have often been compared to rats, with both peoples being described as ethnically unhygienic as well as in terms of (or regardless of) their physical cleanliness. The belief that Gypsies are filthy by nature, by culture and by mode of living contrasts wildly with the rigid and over-fastidious codes of material and cultural hygiene fundamental to many Romany cultures. 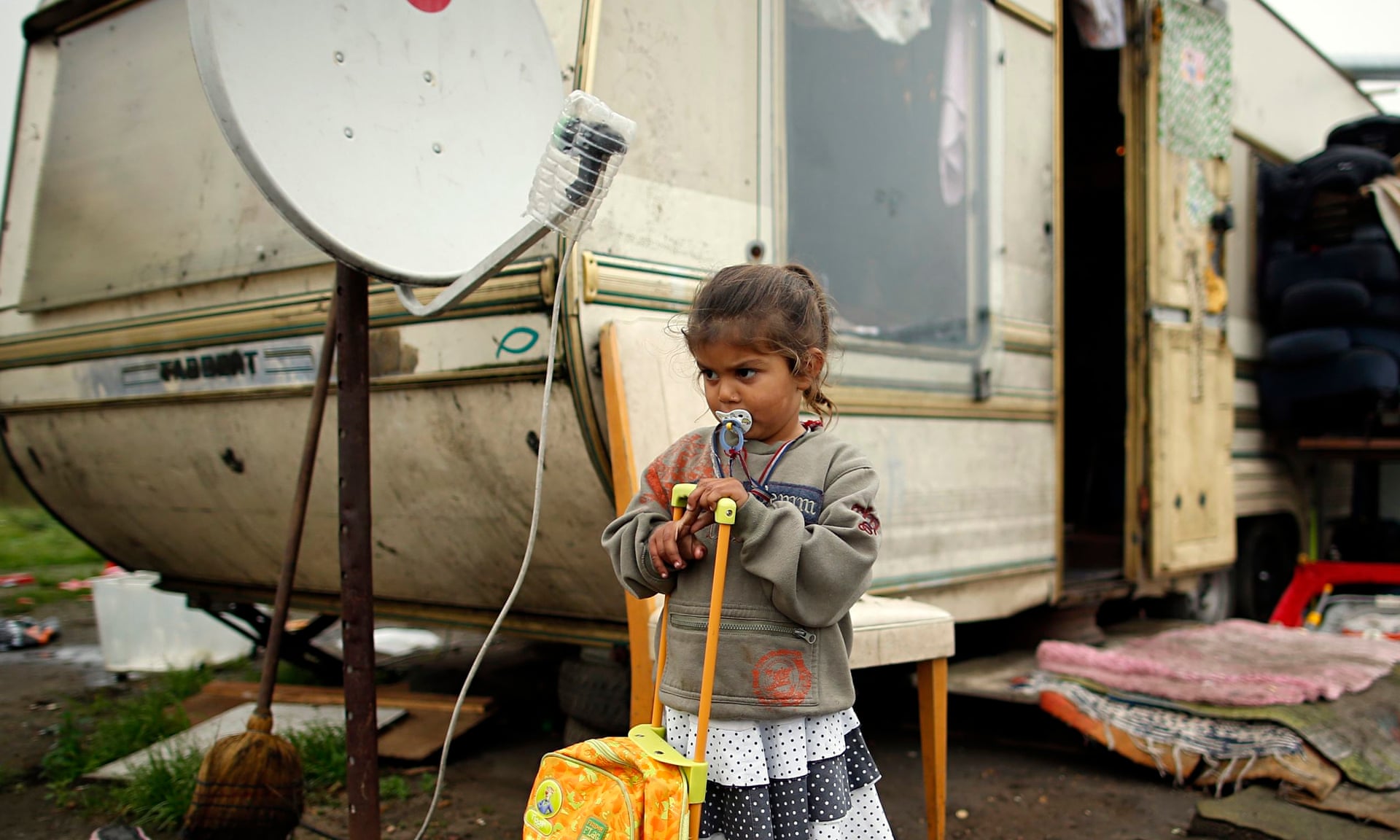 Conversely, there are the stereotypes which evoke the romantic, rose tinted representations of fierce, rebellious Gypsies. The romanticised depiction of Romany people portrays an anachronistic existence that is unfettered, wild and exciting — a mysterious and nomadic race that embody the exotic, and are innately at one with the natural world. Prominent in this depiction is the notion of the sensual Gypsy. The mysterious and taboo nature of the Gypsy lover conjures images of a debauched and sexually promiscuous people whose carnal nature ensnares the hearts of whomever they desire, often through use of the supernatural. The character of the seductive temptress who bewitches White men with her subversive, untameable spirit is common and unchanged since the Elizabethan Era. Similarly, the dark and charming rogue whose allure leads White women astray is an oft used trope of Western film and literature.

they take Gypsy stereotypes and paint them onto other characters

In finding modern examples, one need not delve too deeply into the Western canon of Gypsy biases, simplifications and stereotypes. Think Esmerelda of The Hunchback of Notre Dame, the elemental and intoxicating Carmen, the mysterious Madame Simza of Guy Ritchie’s Sherlock Holmes, Gypsy love interest Roux in Chocolat, Wuthering Heights’ dark and savage Heathcliffe, or the blithe, idealistic Gypsy of Keats’ Dawlish Fair. Even these depictions are simply using tropes of ‘the Gypsy other’ which are so ingrained into popular historical culture that they become unrecognisable as even pertaining to Gypsies. Rather, they take Gypsy stereotypes and paint them onto other characters, with the original Gypsy element merely acting as a point of reference for whatever clichéd narrative of evil or base lust that is being played out.

The recurring plot archetype of a Gypsy lover who in a twist, turns out not to be a Gypsy at all, typifies this. The stock storyline usually following that the protagonist was stolen by Gypsies as a child and is actually from some higher born family. This literary cliché reaches back to the Classical period whereby a character’s hidden identity is revealed to legitimise an otherwise unacceptable union. In this case, it not only makes the romance acceptable, but utilises the duality of stereotypes where the Gypsy qualities that are perceived as favourable become inherent to the character, whilst the racial attributes of criminality and unwholesomeness inherent to ‘the Gypsy’ are left out through the twist of changed racial identity. The sheer quantity of paper-back romance novels centred on these kinds of Gypsy stereotypes is staggering. Kat Martin’s Gypsy Lord is a perfect example utilising all the clichés of dangerous, dark men stealing White women for lust and material gain:

“when tall, handsome Dominic sees one of his Romany band whipping a beautiful, flame-haired captive, he never dreams she is a pampered heiress stolen from the English court. To have her, he will pay a king’s ransom and make himself her lord”.

The objectified, sexual Gypsy character is often involved in some act of abduction, a plot device which is not exclusive to this stereotype however and is oft employed for Gypsy villains. Think the child-stealing Stromboli of Pinocchio, the wife stealing Raggle Taggle Gypsy of Scottish folk ballad, Blood Brothers‘ allegorical Gypsies in the woods waiting to steal children, or even League of Gentlemen’s peg-selling, circus master Papa Lazarou who ‘collects’ wives.

The fictional, literary Romany identity is not only confined to literature and film, it is also capitalised on in modern material culture. Online shopping sites like Amazon and eBay are replete with items of clothing, jewellery and decoration which utilise notions of Gypsy mystery, freedom and sensuality.

The social power of popular culture cannot be overstated, yet efforts to understand the widespread discrimination against the Roma people rarely consider entertainment media as a factor. Print press, local antagonism and social media are studied in detail and the results held up as examples of that which instigates racial stereotypes and mistrust. Meanwhile the entertainment industries continue to churn out the same, tired stereotypes of ‘the Gypsy’ with little variation on the stock characters which have been depicted over the centuries.

Romany identity is almost completely controlled by the non-Romany
world through its film-makers, novelists, journalists and
more recently, documentary makers

Through this avalanche of artistic misrepresentations, Romany identity is almost completely controlled by the non-Romany world through its film-makers, novelists, journalists and more recently, documentary makers. Television shows in the United Kingdom and the United States which predicate on the Big Fat Gypsy Wedding phenomenon have become hugely successful, with a myriad of spin-off titles focusing on Gypsy christenings, Valentine’s Day, Christmas, the Grand National, holidays etc.

The original programme was widely criticised by Romany communities in England for its inaccurate portrayal of Gypsies and the merging of identities of disparate traveller groups. Yet rather than being understood for what it is — an exaggeration of Gypsy life filmed through the lens of societal stereotypes ­— the shows have come to typify a new range of views on Gypsy life for modern society. It is a whole new concoction of stereotypes based on the historical myths but rehashed in a way that is novel to the current generation who consume them. The core premise of the programme and its depiction of Gypsy life are damaging to the Romany community and create hatred and dichotomies between communities, in much the same was as Benefit Street does for those who use the British welfare state. In spite of this, My Big Fat Gypsy Wedding was, in a spectacular failing of irony, awarded a Cultural Diversity Network Award in 2010.

All peoples, cultures and sub-cultures are the subject of stereotypes to varying degrees, and the Romany are not the only group to be the target of Orientalist artistic scrutiny. The difference lies in the lack of self-awareness from writers that their Gypsy tropes are just that, stock simplifications and myths. Furthermore, there is a certain ignorance of this from both the non-Romany and Romany communities who consume this media, leading to the Romany narrative of their own identity being silenced.

It is perhaps inspiring for young Romany girls to have Disney’s Esmerelda as a role model. It is certainly convenient for Romany men to often be assumed to be sexy, mysterious and spontaneous by White women, and it is flattering, if a little perplexing, that high-street fashion dictates flowing summer skirts to embody independent, sexually liberated Gypsy women. However these stereotypes need to be recognised for what they are before they can be used, countered and satirised, in the safe knowledge that the real cultures of an entire ethnic group are not being buried under the weight of Western society’s false allusions.

2 thoughts on “SEXY FILTHY GYPSIES: THE STRUGGLE FOR ROMANY IDENTITY THROUGH THE ARTS”