Hannah Silva’s work can be difficult to penetrate; there is not necessarily a fixed meaning, and in the notes given prior to ‘Schlock!‘ she quotes Kathy Acker by saying to ‘get rid of meaning. Your mind is a nightmare that has been eating you. Now eat your mind.’ This in itself requires interpretation: we place so much emphasis on meaning in our lives, this can destroy our minds, and so perhaps the best way to remove the self-doubt that I’m going to be “wrong” in my view of the work is to eat my mind, take control of the way the dots connect, and the ways they don’t.

For me, this piece stemmed from 50 Shades of Grey, copies of which lay in a pile at the side of the stage area, regurgitated, as Silva sat centre stage, spitting pages that she ripped out with her teeth. A parallel was drawn between words from the novel in question, as well as those from Kathy Acker’s work, with the repetition of pain in different contexts. The use of sound techniques created an eerie atmosphere for the “contract” from 50 Shades of Grey. When the words are extracted like this, as they have been on social media – especially around the time of the film’s release – the book becomes more sinister than a just a clever marketing campaign, or ‘just a story‘. 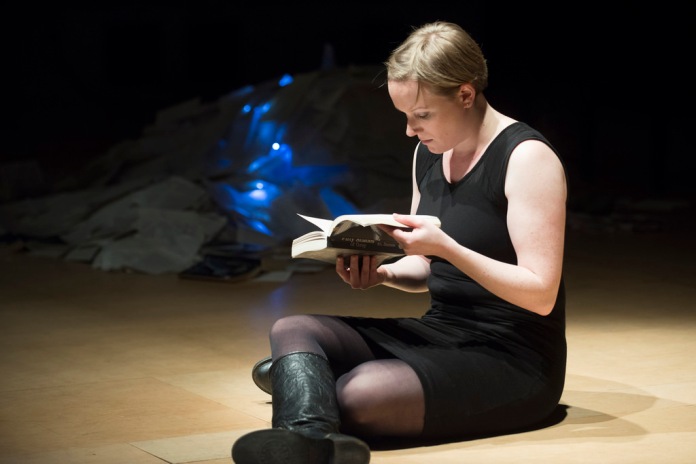 When Silva replaces “woman” with “child”, the audience is more uncomfortable. This is especially true when sexualisation is manifest, of course. The woman is put in a position of vulnerability, a childlike state. The child hasn’t yet learnt to talk, but despite the woman’s ability to speak, this highlights the way women are silenced in certain situations, such as in abusive relationships. However, this mostly goes unnoticed when the book is consumed as a whole. I was able to read all three books in the trilogy without picking up on how damaging it is to portray a romantic relationship like this without calling it what it is: abusive. Put in this state of discomfort when related to a child, if begs the question as to why we accept this treatment of women. We don’t feel this discomfort because it is normalised, and 50 Shades of Grey adds to this normalisation.

As an audience, we are given no neat solution to take away from the experience, nothing to make us feel better or reassure us about the lack of meaning.

One of the parts that stood out most to me was the exploration of Kathy Acker and her experience of cancer. Often called a “battle”, this has its own connotations of violence, pain and suffering. Her name and the illness had a personal resonance with me, but my emotions felt cut off during the vocalisation of the word, with the repetition of the /k/ sound. Silva’s use of different sound techniques produced a variety of atmospheres, using looping with words, phrases and elongated sounds. Whilst a deaf audience member would experience an arguably different show, the use of sign language and subtitles also added to the idea of montage and indicated a dissociation from the body, perhaps linked to this idea of pain, as well as the concept of silence and passivity. The sign language especially added layers of meaning to what was being said.

The most vivid moment came when Kathy was described as being in Mexico, the environment made alive through a soundtrack. We saw who Kathy was as a person there, with her tattoos and her sense of humour, referencing drawing nipples on her flat chest. We were allowed to feel her there, as children mocked her in a country where she only travelled to get an alternative cancer treatment to the chemotherapy she refused. 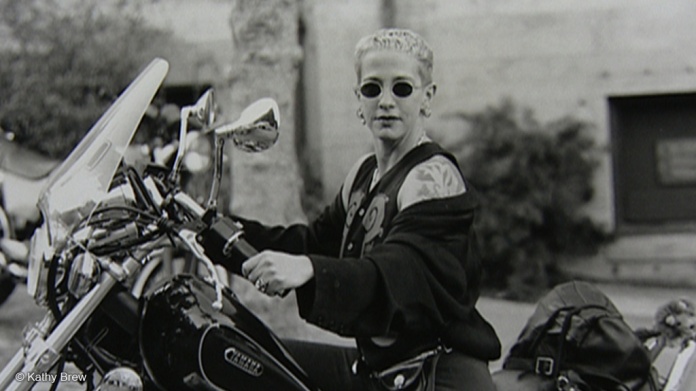 As an audience, we are given no neat solution to take away from the experience, nothing to make us feel better or reassure us about the lack of meaning. We put the pieces together ourselves and draw our own interpretations – the people I went with, both poets, took away something different. One interpreted it as centrally being about postnatal depression and longed for something that told us that everything would be okay in the end, some kind of hope. The other didn’t try to think of meaning, but just concentrated on the use of sound. For me, it spoke of women’s pain and society’s expectation for us to take it, and ideas of what femininity is – passivity, breasts, motherhood – and a dismantling of these notions. In returning to the notes, and this idea of wanting comforting, we are told ‘there are no safe words’. With this, Silva seems to extend this sentiment to life, where pain must be endured, and survival is a matter of luck.

The event reviewed took place at The Albany, Deptford, on 10th and 11th November. It is part of a tour, and the next dates are in Derby at Derby Theatre on 4th March and in Oxford at Oxford Fire Station on 8th March. Other dates to be confirmed at Penned in the Margins.