Steel is a primary component in infrastructure, vital to the effective functioning of modern, industrialised economies. It is used to make buses, bridges and buildings, as well as train tracks and in engineering for power generation, including wind. However it is also a core element in infrastructure and products damaging to our civilisation – oil rigs, cars, and polluting coal power plants.

In 2014 UK crude steel (steel in the first solid state after melting, suitable for further processing or for sale) production was around 12m tonnes, making us the 18th highest producer globally, way behind China who were runaway leaders with 823m tonnes. 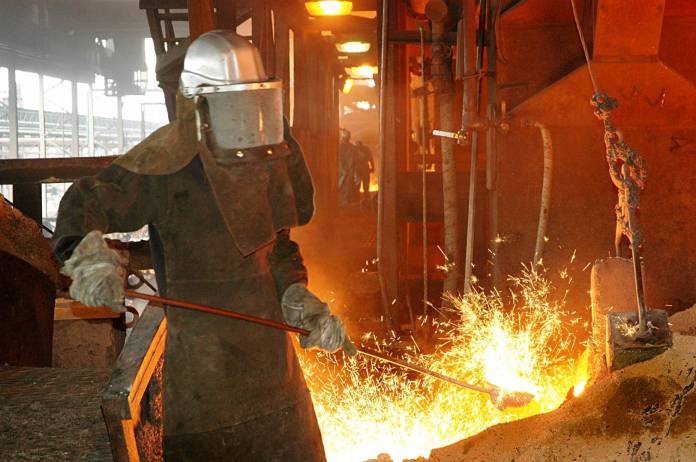 What Begins In The Earth Ends In The Atmosphere

Before the Basic Oxygen Steelmaking (BOS) process can commence, a blast furnace is required to create a charge of molten iron. The raw materials for producing molten iron are iron ore, coking coal, and fluxes (materials that help the chemical process) – mainly limestone. The UK’s resources of good quality coking coal and ore are limited and not economically viable, so we import these raw materials, primarily from the USA, Canada, Brazil, Australia, and Scandinavia, although apparently not sourcing from the world’s largest producer by some distance – China.

Shipping vast quantities of these commodities across the world clearly carries with it an environmental cost, in terms of carbon emissions produced in transportation. However, seen as we’re a long way off zero-carbon industrial transportation, the real issue here, is whether transporting the raw material to the ‘demand destination’ produces fewer carbon emissions than transporting the finished good. In either case, supply chains should be as short as possible – Sweden being our nearest supply of raw materials.

Control of the supply of iron ore is largely concentrated among three multinational companies:

An interesting development in this industry is the introduction of driverless trucks at mines, with senior management citing interests in improving safety. Obviously the consolidation of wealth, through reduced employment costs, is only a side issue here.

Once a swathe of human rights have been violated and the environment degraded in the extraction process, the raw materials wash up at the North of England’s deepwater ports, such as that of Teesport, before making a short journey to the steelworks at Scunthorpe or Teeside.

Next comes the steelmaking process, with BOS used for making bulk steels (83% of production), and the Electric Arc Furnace (EAF) used to produce special quality steels and some lighter steels (17%). Both of these processes are vastly energy intensive, with EAF typically using enough electricity to power a town with a population of 100,000, making it vital that this energy is sourced from renewable power. Yet despite onshore wind being the cheapest source of electricity, the government continues its ideological resistance to harnessing this abundant source of cheap and emission free energy.

The environmental costs, in terms of pollution, are non-discriminatory; Carbon doesn’t know whether it is above Germany, Italy, the UK, or indeed China, but it’s production impacts us all. As such we need to cooperative with other EU nations, to come up with an EU-wide policy on charging industry for the carbon it produces, replacing the ineffective cap-and-trade scheme, so that we can avoid the present situation whereby UK firms paid 9p per kilowatt-hour last year, compared to 4.12p in France and 4.81p in Germany.

The issue with Chinese production is not just one of oversupply driving down prices, it’s one carbon exporting. The currently reported cost of Chinese imports – €583 per tonne – fails to take into account the environmental and social costs of this production, meaning it is hugely undervalued in comparison to the EU cost of €897.

In 2011 the Carbon Trust reported that 25% of all CO2 emissions from human activities ‘flow’ between countries as imports or exports, with commodities such as steel comprising roughly 50% of this flow. This is because energy-intensive industries have relocated from carbon-restricted economies to less restricted ones, with the final products being shipped back to the more tightly restricted economies.

If the EU is serious about tackling climate change it needs to recognise the carbon embedded in imported energy-intensive commodities, through consumption-based emissions tariffs, to incentivise countries like China to clean-up production and create a level playing field for EU producers. This reporting is already well-developed and are widely recognised across the political spectrum, with groups as broad as the right leaning think tank Policy Exchange advocating their benefit following the failed Copenhagen climate summit in 2009.

But of even more importance, going into this month’s crucial Paris climate summit, is that a comprehensive strategy to reduce global emissions is agreed and this requires leaders to look beyond market-based solutions. As Bill Gates recently pointed out “Without a substantial carbon tax, there’s no incentive for innovators or plant buyers to switch… The private sector is in general inept.”