The argument about the relative merits of literary and genre fictions just keeps running and running. There’ll be periods of decorous silence, and then it will break out again, usually in the form of some egregious statement in a broadsheet or magazine, and it will be like it never left.

One thing you tend to notice after a while, though: it’s almost never writers of genre fiction who are picking the fight. To be fair, it’s often not “literary” writers either – it’s academics taking up the cudgels on their behalf; considerately telling us which stories are worth serious consideration and which aren’t. And I guess we appreciate the help, right? Because it’s a bewildering fictional landscape out there and an innocent young seeker after truth could easily go astray.

The most recent iteration appeared in the Guardian on 31st August of this year, in the wake of the many heartfelt tributes to Terry Pratchett’s literary genius that followed his death. The piece was by art critic Jonathan Jones, who wished to demur. In Jones’ estimation Pratchett was no genius. Moreover, the fact that he is being extolled as one is a morbid symptom, a sign that our culture has lost its bearings. “In the age of social media and ebooks, our concept of literary greatness is being blurred beyond recognition. A middlebrow cult of the popular is holding literature to ransom.”

I was amused by this image, with its suggestion that somehow the existence of popular literature represents an existential threat to great art. A threat to the reader too, it seems. “By dissolving the difference between serious and light reading, our culture is justifying mental laziness and robbing readers of the true delights of ambitious fiction.”

One thing you tend to notice after a while, though: it’s almost never writers of genre fiction who are picking the fight.

In case you’re waiting for the punchline, it’s this. Jones had reached his authoritative judgement on Pratchett’s literary worth without ever having read him. “I did flick through a book by him in a shop, to see what the fuss is about, but the prose seemed very ordinary.” This from a man who wants to wage a campaign against “mental laziness”. But we live in a post-ironic age.

The Guardian has an excellent record of reviewing genre novels and movies without shunting them into a “here’s something you might consume for light relief between masterpieces” ghetto. But sadly it has form in this printed media version of trolling. Last year it was Oliver Burkeman’s turn to tell us – I’m assuming with a straight face – that one way to “be a smarter reader” and “get more from what you read” is to stick to literary fictions. Why? Because a “well-designed study” at a US social research think tank (it’s Kidd & Castano if you want to look it up) found that literary fiction produces more powerful emotional identification with its more fully rounded characters and has a lasting effect on your ability to empathise with others. 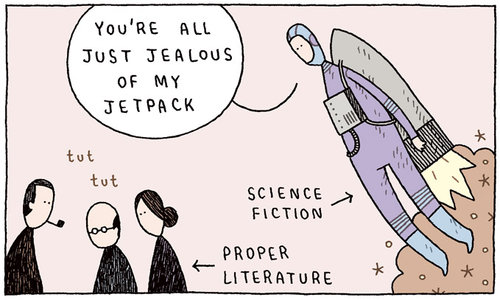 The relevant section of Burkeman’s little how-to guide is called “Keep it Literary” – building on the most tendentious of Kidd & Castano’s five linked experiments, in which subjects read selected passages from either literary or genre fictions and then performed a range of tests designed to measure their empathy. The smoking gun here is “selected passages”. The experimenters hand-picked texts which they felt exemplified the differences between the two kinds of text, which is a little like marking the deck before you do a random shuffle. Six passages in all, by the way – three from genre fictions and three from the world’s canonically great literature – so this generalisation about all literary fiction and all genre fiction is based on about a millionth of a per cent of each. And despite being able to skew their sample in this bespoke way, Kidd & Castano reported differences between test and control groups that were barely larger than the margin of error. Mark Liberman dissected these procedural inadequacies very thoroughly in the Annals of Overgeneralisation on Language Log, and he was far from the only one.

So a spurious claim is being worked up out of a flawed study that seriously over-sold the significance of its findings. You can’t help but feel that there’s an agenda here, or at least a presumption – that literature has merit and that what has merit is by that same circular definition literature.

Other writers have been less coy about saying exactly this. Here’s Arthur Krystal, writing in the New Yorker in 2012:

“Genre” is not a bad word, although perhaps the better word for novels that taxonomically register as genre is simply “commercial.” Born to sell, these novels stick to the trite-and-true, relying on stock characters whose thoughts spool out in Lifetime platitudes. There will be exceptions, as there are in every field, but, for the most part, the standard genre or commercial novel isn’t going to break the sea frozen inside us. If this sounds condescending, so be it.

No, it doesn’t sound condescending. It just sounds laughably off the mark and self-parodically pompous. Lyrical though “the sea frozen inside us” may be, resorting to it in the middle of an argument is an admission that you don’t have any facts to call on. “Hey, this may be a fine book, but my permafrost is still intact so it ain’t literature, man.”

You can’t help but feel that there’s an agenda here, or at least a presumption – that literature has merit and that what has merit is by that same circular definition literature.

I do like “born to sell”, though, because it’s very revealing. Genre writers do it for the money. They’re like… prostitutes! If you want true love, stick to respectable auteurs who’ll lie back and think of posterity.

The piece continues in two weeks’ time on The Norwich Radical.

2 thoughts on “LITERATURE VS GENRE – SECONDS OUT (PART 1)”