Last weekend Green Party activists descended on the South coast of Bournemouth for the Party’s Autumn Conference. Many of the 2,000 plus members and supporters were in attendance for the first time, a reflection of the #GreenSurge in membership, which has more than doubled to over 60,000 since the start of the year.

Conference is the ultimate decision making body of the Green Party, through which all party policy is created. Unlike other Westminster parties, anyone can directly affect the process of policy creation, simply by becoming a member and submitting a motion — to either change or remove existing policy, or to create new policy where there are gaps. It’s this form of bottom up politics that empowers members to contribute to the areas of policy they are passionate and knowledgeable about.

As a Hub Leader for Norwich FoodCycle — a national charity committed to reducing food waste, food poverty and social isolation — I am passionate about tackling these important social issues and wanted to use my power as a member of the Green Party to set out a policy framework to address them. So, using the knowledge I have gained as a Hub Leader, I submitted a motion on Food Waste, with support from members of Norwich Green Party.

overall waste in the UK supply chain is around 4.1m tonnes per year

Food waste has become a topical issue of late, with mainstream media coverage increasing, following the French Parliament’s decision to pass legislation compelling retailers with 4,305 square feet of store space to sign agreements with charities to facilitate the redistribution of any unsold, but still edible, food, or face penalties of up to €75,000.

According to a report by government agency WRAP, overall waste in the UK supply chain is around 4.1m tonnes per year. This not only includes food that is wasted at retail level, as supermarkets throw away food that is perfectly edible but past sell-by or before before dates, but also food that is routinely rejected by retailers because of strict cosmetic standards, such as being ‘misshapen’ or ‘discoloured’ — the Soil Association estimates that 20-40% of UK fruit and vegetables never make it on to the shelves due to this practice.

Until last weekend no Westminster Party had any formal policy to deal with food waste. But on Saturday I took my Food Waste motion to the Green Party conference, as the second highest supported motion on the agenda, following months of opportunity for members to debate and submit amendments online.

After initially presenting the motion at a packed workshop, allowing further opportunity for members and supporters to discuss and ask questions, I took to the conference floor on the back of unanimous support in the workshop straw-poll to passionately convey how important I felt the issue was and to describe the key elements of the motion. It was taken to the floor to provide opportunity for members to voice concerns or speak in favour of the motion, and after a short period of deliberation it was voted through with an overwhelming majority. 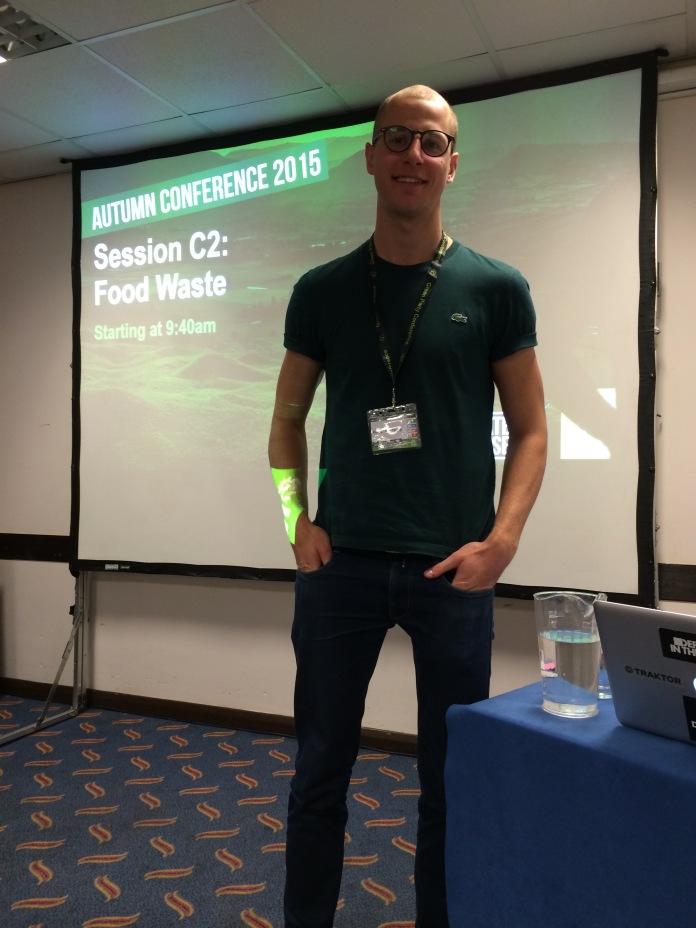 As a result it is now Green Party policy that large retailers should be required to hand over surplus food, should it be requested by a redistributing organisation that has been registered by the local council as permitted to redistribute such surplus. The policy also enforces the ‘Food Waste Hierarchy’ and would see it made unlawful for any retailer to refuse fresh produce based purely on cosmetic standards. It also acknowledges the role of local councils in facilitating the formation of effective redistribution networks, by bringing together relevant organisations and resourcing them where appropriate.