On the anniversary of VE day this year I tried to drive to the supermarket in my home town and was met by crowds of people in Sunday dress, lining the roads leading up to the war memorial and laying down wreaths of poppies as they waited for the procession, which I could hear approaching even from my car, complete with marching band. They were doing so to honour the soldiers lost in WW2; those who fought for our country, or, more ostensibly, those who fought for ‘freedom’.

There were many causes of the Second World War, but what we remember the Nazis for -the version of history we learn in school- is the holocaust. Children in history classes are taught to denounce a fascist regime which placed one type of person, the ‘true’ Aryan German, who was ‘really’ from Germany on the basis of their fair hair and white skin, in a hierarchy above other types of people who were not as worthy. This list included people who were disabled, gay or mentally ill but focussed mainly on Jews, who were considered to have little or no right to the land they lived in because of their ethnicity and heritage. They were not ‘true’ Germans. And it was freedom from this regime, freedom from persecution and discrimination, that most of us proudly believe we fought for. And it’s this which is epitomised in the phrase “If it weren’t for our brave soldiers, we might all be speaking German now”.

Between 1938 and 1939, the British project ‘kindertransport’ rescued 10,000 Jewish children from Germany, but Britain had planned to rescue five times that number. More than 70,000 Jewish immigrants had been accepted into the UK before the outbreak of war. Rationing continued until 1954, partly because of austerity measures to pay back British war debts and partly because it was decided imports were better off diverted to Europe to feed the millions of hungry people displaced by the war. After all, there would be no point in a military effort to help those people if the plan was then to leave them to die at the end of hostilities, right? In 1945, Britain was a country which was apparently content to live on tins of Spam rather than allow others abroad to suffer and die, or, at least, that’s the Britain we remember. A Britain which gracefully accepted those ‘genuine’ refugees, even at its own cost, because it was the right thing to do. Fast forward 70 years to 2015, and the picture looks very different.

Refugees fleeing war torn homelands are met with batons on the Greek island of Kos. Those who make it to Calais find themselves stuck in the sprawling slum known as ‘the jungle’. There are 4 million* registered Syrian refugees, and 5.5 million Britons living abroad. That’s less Syrian refugees in the world than there are British migrants, and yes- we are migrants, not ‘ex-pats’. Germany has accepted over 73,000 refugees this year, Hungary over 32,000 and Britain? A measly 7,000. With 5,000 refugees amassed on our doorstep in appalling conditions, we can’t even bring ourselves to help them. Instead, we respond by putting up more fences, spending money on tighter and more brutish security. The ones who do make it here are locked up indefinitely in ‘detention centres’ sporting long records of human rights abuses, and the press and politicians alike encourage us to both fear and loathe them.

if you need more evidence that the average Briton is quite comfortable with this new fascistic reality, look no further. Folks behind the @DMreporter and @Bestofthemail twitter accounts experimented by posting real Nazi propaganda and Hitler quotes in the comments underneath Daily Mail articles about immigration. The result? They were all upvoted.

With so many men, women and children starving and dying because we refuse to help, who would really blink an eye if somebody suggested, oh, I don’t know, putting them to work in a labour camp? And if you need more evidence that the average Briton is quite comfortable with this new fascistic reality, look no further. Folks behind the @DMreporter and @Bestofthemail twitter accounts experimented by posting real Nazi propaganda and Hitler quotes in the comments underneath Daily Mail articles about immigration. The result? They were all upvoted. And yet, these are the same people who proudly sport a poppy on their blouse, the same people who share V-day pictures on Facebook and thank our ancestors that we’re not speaking German. 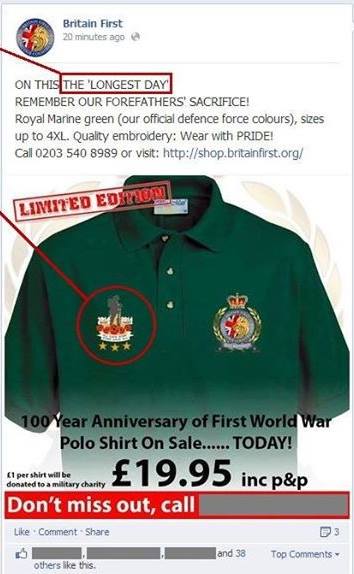 Alas, the picture was not so rosy in the 1940s, either. The influx of Jewish refugees was met with a wave of hostility, and Britain tightened it’s immigration controls, fearing that too many immigrants could cause ‘antisemitic feeling’ across the country. Papers like the Daily Mail ran headlines about ‘swarms’ of Jewish immigrants (sound familiar?). But we don’t remember it that way, because if we did, what was it that really separated us from the Germans? We had no concentration camps, but we weren’t even aware of the German concentration camps until the end of the war, so that one won’t fly. What exactly is the basis for our moral superiority that we remember so warmly, as we line the streets in our fancy Sunday hats?

Because refugees don’t exist only in the rosy past, they exist right now.

Refugees then, refugees now. Recession then, recession now. But you’re unlikely to hear about Britons happy to live on rations so that others can eat, as Philip Hammond spreads panic about ‘marauding migrants’ threatening our quality of life and the press seems more concerned about disgruntled holidaymakers than families fighting for their lives. Members of the British Jewish community wrote a letter criticising the UK’s response to the refugee crisis, saying “Our experience as refugees is not so distant that we’ve forgotten what it’s like to be demonised for seeking safety”. Because refugees don’t exist only in the rosy past, they exist right now.

Thankfully, all hope is not lost. Hundreds of ordinary Britons have risen to the challenge, running aid convoys to Calais and tirelessly raising funds and awareness. But if you refuse to do anything to help? Put down that poppy. Both of my grandfathers fought in WWII, but I’d rather be speaking German than thinking like a Nazi.

*All figures from the UN refugee agency

If you would like to help migrants at Calais see calaismigrantsolidarity.wordpress.com and the ‘Calais- People to People solidarity- Action from UK’ facebook page