The start of spring brings with it one of the fixtures of Norwich’s cultural landscape. Norwich Fashion Week 2015 is now drawing to a close, and the more I reflect on it, the uglier it seems.

I’m sure I’m not alone in the reservations I have about this, or any other event that tries to promote fashion as a force for good in our communities, lives and world. That said, I’d also like to try to move the debate beyond the realms of body idealism, anti-feminism and classism that are inherent in the fashion industry, and not remotely obfuscated in provincial events such as our city’s. I want to progress the argument into the realm of the truly terrifying, into which Norwich Fashion Week readily transports us.

We’re all aware of the uncomfortable truths that tremble at the edge of thought when we consider disposable fashion, but I want those truths dragged under the light of scrutiny.

We’re all aware of the uncomfortable truths that tremble at the edge of thought when we consider disposable fashion, but I want those truths dragged under the light of scrutiny.

There are many I suspect who would rail at my conflation of Norwich Fashion Week and the horrors of big-fashion, but when I see the list of sponsors of the week’s events, and look at the city’s retailer-shows any justification on the grounds of promoting local talent or supporting small businesses melts into the toxic ether  on which all fashion floats. No, events such as this do not exhibit any of the saving graces of the fashion industry, but rather serve to stoke the hunger for constant consumption that drives the lives of millions of workers worldwide into abject suffering and misery and continues to flood the world’s ecozones with unimaginable volumes of poison.

The Eastern Daily Press described one of this year’s catwalks as ‘oriental’. After my nausea passed at this remark, I paused to consider the impact that fashion might have on the ‘othered’ world of the far-far-away.

10,000 kilometres away from Norwich, almost as far away as one can be while remaining in the Palearctic Ecozone, is the cluster-city Xintang in Guangdong, China. It is a place that might not unreasonably be described as hellish. Xintang produces over 300,000,000 pieces of denim clothing each year. It is just one of China’s 133 designated textile manufacturing cluster-cities, all producing similarly terrifying volumes of disposable consumer textiles.

Particulate matter from the city’s great boilers and dye production plants hangs in the air, bathing the entire city in a choking, bluish haze. Ditches of indigo coloured water flank the roads of the city’s industrial complexes, and the Yujiang River runs slow and black. Greenpeace tested the river last year, finding cadmium, chromium, mercury, lead and copper in 17 of 21 water and sediment samples. In one sediment sample, the cadmium concentration exceeded China’s ‘safe’ limit by a factor of 128. In another sample the water’s pH was found to be 11.28, around the same as domestic oven cleaner.

Particulate matter from the city’s great boilers and dye production plants hangs in the air, bathing the entire city in a choking, bluish haze. 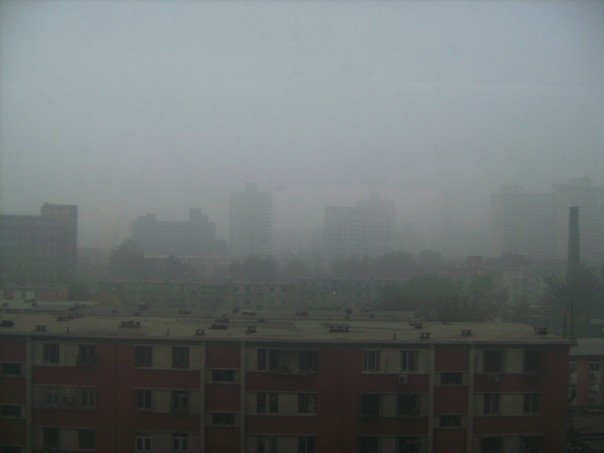 Many of the c.700,000 workers of Xintang (of whom c. 500,000 are migrant workers, and therefore denied the limited security that an employment contract or insurance might offer) begin their day sifting through this toxic effluvium for stones suitable for use in the industrial washers used to produce faded, ‘stonewash’ denim. The Yujiang flows eastwards through Wuhan, Zhaoqing, and empties into the South China Sea at Guangzhou, a city of 15,000,000 people.

c.600km northeast of Xintang is Shaoxing in Zhejiang province, where a local idiom says, ‘if you need to know what colour is fashionable, look at the river.’ The Shaoxing cluster-city produces over 315,000,000,000 litres of toxic water each week, the majority of which is unceremoniously dumped directly into the Qiantang River. Greenpeace testing of the Qiantang found carcinogens including ammonia, benzoil nitrate, dichloromethane, cholorobenzene and perfluorooctanoic acid in dangerous concentrations.

c.600km northeast of Xintang is Shaoxing in Zhejiang province, where a local idiom says, ‘if you need to know what colour is fashionable, look at the river.’

When I force myself to imagine the Wensum reduced to a morass of toxic crimson sludge, or the heather meadows of Mousehold Heath coated in caustic indigo sediment, or imagine the spire of the cathedral disappearing behind a screen of carcinogenic particulate matter, I conclude that this would be an unacceptable price to pay for any clothes, as (I think) would any other resident of this, or any city. But as long as it happens ‘over there’, in the ‘orient’, it’s not our problem. We know that textile production is dangerous and dirty, Wordsworth identified as much in his Prelude:

Doubtless, I should have then made common cause
With some who perished; haply perished too
A poor mistaken and bewildered offering
Unknown to those bare souls of miller blue

The ecological disaster encouraged by the needless consumption of clothing championed by fashion weeks is a tentacular one, like the kraken that grapples the ship — it attacks us from unexpected angles. The water drawn from the toxic Yujiang, Qiantang, and countless others like them poisons millions of hectares of arable land every year. This destabilisation of Chinese agriculture and aquaculture means an increased reliance in China on imported foodstuffs, which drives the price of food globally ever upwards. That’s right — you’re paying for your jeans through your growing grocery bills. Meanwhile, a productive child in Xintang might be able to earn £2 a day by snipping loose threads from stonewashed denim.

Earlier this month, the journalist Chai Jing released her self-funded film Under the Dome in China. Seen by over 100,000,000 people before it disappeared from the internet, Chai made an emotional, personal plea for increased regulation of Chinese industrial waste. She visited manufacturing cluster-cities like Xintang and Shaoxing, spoke to children there. Have you ever seen stars?” she asked “How about a blue sky?” “Have you ever seen white clouds?

When I read in commercial provincial rags that ‘oriental’ is ‘in’ this season, I know what they mean.