In February, the Image Comics/Milkfed Criminal Masterminds Inc. series Bitch Planet reaches its third issue in an ongoing series (tentatively, out of 30). Written by Kelly Sue DeConnick (Captain Marvel, Pretty Deadly), drawn by Valentine De Landro (X-Factor), coloured by Cris Peter and lettered by Clayton Cowles, the book features a wonderful design by Rian Hughes (covers and title) and Lauren McCubbin (backmatter) and is tightly edited by Lauren Sankovitch. There will be no invisible labour here.

After three issues under its belt (depending on when this piece is published), it feels a little strange to write a review — so this is not a review, not exactly; this is an appreciation.

DeConnick uses her writing to build a dystopian setting in which patriarchal structures have reached such an overt manifestation of power that the rulers — the New Protectorate — are a bunch of old men who call themselves The Fathers. A society whose constant, obsessive message is ‘You are broken, you are fat, you must obey, you must comply’, a society that has rejected the idea of Mother Earth (‘Earth is the Father’) and created the Auxiliary Compliance Outpost — affectionately referred to as Bitch Planet – as a space (‘the Mother’) penitentiary for non-compliant women. 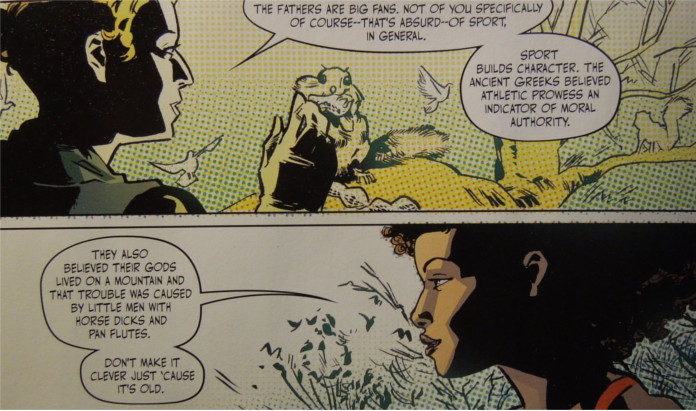 Which is where we encounter, in #1, the beginnings of the series’ cast: Kamau Kogo, Penny Rolle, Meiko, and Violet. In #2, we start to get a sense of the story: mediatic gladiatorial fights exploiting the A.C.O. prisoners will soon take place, and a team is clearly forming. And Kam is at the centre of it all, as she finds out something even fishier is taking place on Bitch Planet.

De Landro makes sure the world(s) set out by the script have a visual representation. And it applies to all relevant meanings of the word. On the one hand, we are given a formally and aesthetically satisfying piece of comics art, with its oppressive urban, prison and bureau-political backgrounds, fantastically paralleled in the panel layouts (rigid page structures vs decentred angles and sequences). On the other, we get characters that are palpably different, non-conforming individuals – wonderfully diverse women and men, pitted against idealised, objectified versions of themselves, in bodies and behaviours, ever-present in the background imagery and personified in the Model.

The construction of the books, of their action and storylines are made sure to stand out thanks to Peter’s colouring work, with multiple flesh tonalities, stark reds where blood runs freely, the glowing, neon pink of the Model versus the cold, green and grey glow of the screens of the controllers and The Fathers. And to make sure the differences, the individual voices of each character is heard, Cowles’ lettering operates on the fonts and colour contrasts of the soundwords permeating the realities of the city and of Bitch Planet.

What makes the comic so strong and powerful is its delivery of the whole package. It comes as a fist of engaged, active, angry feminist affirmation and defiance. Where the text provides a dystopian fictional narrative to explore societal issues, the supplementary material deals with the latter directly. Each with its own Bitch-name, in McCubbin’s design, the different sections unashamedly keep pounding the message through: ‘Bitchfest’ editorial afterwords, ‘Bitches be like…’ essays (so far including Danielle Henderson and Tasha Fierce, with Laurie Penny and others still to come) and reader letters, ‘Itty Bitty Bitchy’ and ‘Bitch Face’ social media re-publication, ‘Hey Kids, Patriarchy!’ fake (?) postal order and personal ads on the back cover (with a small Leelah Alcorn obit in #2), and the pulp-style, almost intentionally visually jarring covers by Hughes.

With Bitch Planet, the creative team have tapped into the constantly rising wave of contemporary feminist activism, especially in its online multi-voiced, diverse, thorned, angry nature. It does not want or ask you to buy it. It stands, loud and proud on the shelf, staring at you until you give in to it. It pulls no punches, and hits you hard. It is a giant middle finger – literally, look up a poster – to those readers who complain about ‘politics/social issues getting into my comics’, and think ‘social justice warrior’ is a pejorative label.

It challenges pretty much everything under the kyriarchal sun, including itself, and urges you to go forth and be non-compliant. Are you woman enough?