It doesn’t take a long look at society to see that ‘fat-shaming’ is a problem. Katie Hopkins recently put on 4 stone for a TV project called ‘To fat and back’, going from 8 to 12 stone (am I the only one who thinks she looks great?) with the express purpose of ‘proving’ to fat people that being fat is their fault for being ‘lazy’. And while her particular brand of in-your-face nastiness might not be representative of the entire country, her attitudes towards size are unfortunately widely held. Despite the average size for women in the UK being 16, shop mannequins and clothes models are nearly always a size 6 to 8, a ‘plus size’ model wears a UK size 12, and moral judgements about body size and shape are rampant in our media. This particularly affects women, who are taught from an early age that we are entitled to a smaller physical space than men.

Being big, strong or tall are compliments for men, but women are always encouraged to be small, cute, dainty and precious.

It’s clear that we have a problem- as children we learn not to judge a book by its cover, yet we’re taught by this rhetoric to look at fat people and make value judgements about their health, morals and worth as people. I’m a heavy smoker who stuffs two packs of co-op own brand chocolate slabs into my face every night as I cry into my bottle of wine, yet a society which cares only about size looks at me- a size 8- and sees a healthy, happy and active individual with a good work ethic. This is thin privilege in action, and it’s really quite nonsensical.

It’s no surprise, then, that there has been an equally shaming response from the other side. Many of us will probably have seen, and possibly felt put out by, a new ‘real woman’ rhetoric marked by statements such as ‘real women have curves’ and ‘only dogs go for bones’ (thanks, guys). There are a number of reasons this is not okay, but what I would like to take issue with today is the idea that some thin people do not have ‘thin privilege’. This is a misunderstanding of the way that privileges and oppressions intersect and offset each other.

It doesn’t matter that I spent my teenage years forlornly eating special K twice a day, weighing myself almost hourly and shrinking myself as much as I could- when I walk into Topshop, I always find clothes in my size. I am more likely to be hired than somebody twice my weight because I am automatically seen as more capable. The world around me, from aeroplane seats to bathtubs, is made to fit me.

No matter what I went through or how I feel about my size, I still very much have thin privilege.

As Matilda rightly said, having privilege doesn’t make you a bad person, it’s simply an unearned advantage in life, and just as we ask men to use their male privilege to call out other men on sexism, I have to use my thin privilege here to call out the denial of this privilege from many slim women working in feminism and social justice, because an understanding of privilege intersectionality is essential to the work that we do. To say that suffering from an eating disorder or having any other body issues negates ones thin privilege makes as much sense as a man claiming that the fact he feels he has to work out at the gym every day to feel ‘manly’ means he doesn’t have male privilege. As much as body issues suck, what we are actually seeing here is an intersection of two very different strands of the privilege/oppression hierarchy- thin privilege and the privilege of not suffering from a mental illness. It’s very possible to have one and not the other. And as much as seeing hurtful statements online might irritate us, it comes nowhere close to the systemic shaming that fat people must face every single day and it’s important for us to understand that these types of comments only level the playing field between fat women and thin women.

However, this is not the only playing field that matters, and woman on woman hate is something feminism should be fighting in every corner. It’s a common line of thought in social justice that it’s impossible to hurt somebody with their privilege, and for the most part that’s true. “You drive like a man” is a compliment when juxtapositioned with “You drive like a woman” and it would be very difficult to hurt me with reference to my white skin. 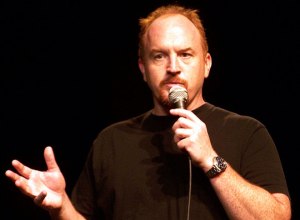 “What can you really call a white man that really digs deep? “Hey, cracker!” Oh, shouldn’t have called me a cracker. Really ruined my day. Taking me back to owning land and people, what a drag!”- Louis C.K

One of these things is not like the others. If we acknowledge that fat shaming is a problem that disproportionately affects women, then what good does female infighting do us? Creating a rhetoric about ‘real women’ does nothing but further the idea that there’s an ideal body shape that women must aspire to, and saying that ‘only dogs go for bones, real men like curves’ only appeals to the idea that the primary purpose of our physical being is to be appealing to men. All women, fat or thin, are body shamed purely on the basis of being women and expected to live up to ridiculous beauty standards, and because of this skinny-shaming can be infinitely more hurtful than trying to shame somebody for being white.

So instead of fat women putting down thin women, and thin women putting down fat women, let’s keep working towards goals we can all agree on. A wider variety of body shapes in clothing models, more variety of clothing sizes in shops and fighting all body shaming wherever we see it will help us prove to society that there is no “right way” to be a woman. Because as a wise woman once told me, “The road to self esteem is not paved with hypocrisy”.

3 thoughts on “LET’S CHECK OUR THIN PRIVILEGE- AGAIN! A RESPONSE TO MATILDA CARTER’S “CHECK YOUR PRIVILEGE A LITTLE MORE THOROUGHLY””