In certain circles, there is the perception that the transformation to the ideal of the student as consumer is complete and that therefore the student activist and a radical student movement is a thing of the past. Although there was the anti-fees flashpoint in 2010, the argument goes, now the modern student is more concerned with getting their money’s worth from the education they directly pay for, than they are about changing the world.

Over the last four years there have been countless examples of campaigns that prove this thesis wrong. This series of articles seeks to explore those campaigns, what they have achieved and what they mean for the student movement and the Higher Education sector as a whole.

A year ago, the coalition government announced the next in a long list of right wing policies that would disregard ordinary people and seek to outsource the State under the veneer of deficit reduction. This time, it was their second major attack on the Higher Education sector and students after the now infamous tripling of tuition fees in 2010 and took the form of a proposed privatisation of the student loan book.

Privatisation of student debt was, at face value, an uneconomical proposal. Interest rates on existing loans are fixed and are low, often lower than the rate of inflation – therefore making their allure to the private sector limited. As a result, two alternative suggestions were made as to how profit hungry private companies would become interested in such a purchase – either the lifting of the cap on interest rates or through a synthetic hedge; the state propping up returns for business.  Both of these were unpalatable. In the one instance you have a retrospective hiking of interest rates, and in effect, therefore, an increase in tuition fees in some instances 15 years after the decision had first been taken to enter Higher Education, and in the second, a privatisation kept alive only by the injection of public money. 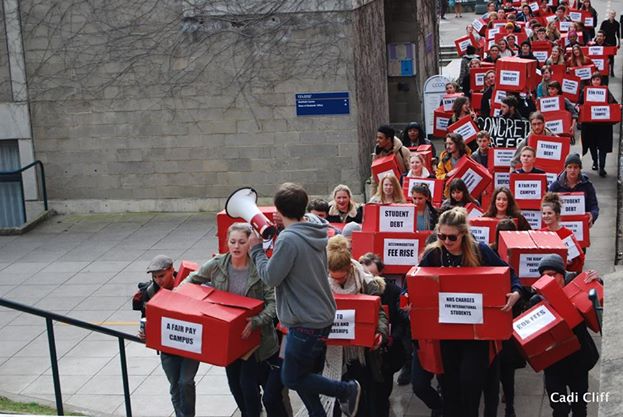 And so in response, the student movement sprang into action. A national week of action was called by the newly formed Student Assembly Against Austerity – the campus based wing of the People’s Assembly.  Across the country students marched, petitioned, dropped banners, occupied and staged sit-ins. Over 50 campuses took part, including those without a history or a reputation for radicalism. In Norwich, at UEA, 150 students marched against the sell-off, the largest action in the week at a University which helped build the ‘Defend Education UEA’ campaign and allowed a new flashpoint in activism on campus. We lobbied MPs to sign an early day motion to condemn the sell off – just under one hundred MPs did, and three weeks later, on budget day students across the country again marched and protested and occupied – intent to fight the privatisation.

For a brief moment, we had won.

Off the back of this campaign, the government eventually announced it would not be privatising the student loan book. For a brief moment, we had won. It was a fantastic moment for the student movement. At a time when students were on the defensive, on a fight not on their terms and having faced failure after failure in national campaigns against fees and cuts, the movement managed to capture a major concession from an unwilling government. The victory shows us that on the right issue, at the right time, decentralised, grassroots activism can and does work.

The #stoptheselloff campaign was, despite being national in its scope, small and localised, with pockets of activity popping up on campuses unconnected to any national co-ordination. This was both its strength and its major shortcoming. While it allowed for the resistance to be grassroots, inventive and spontaneous, it also meant that much of the energy has now dissipated. 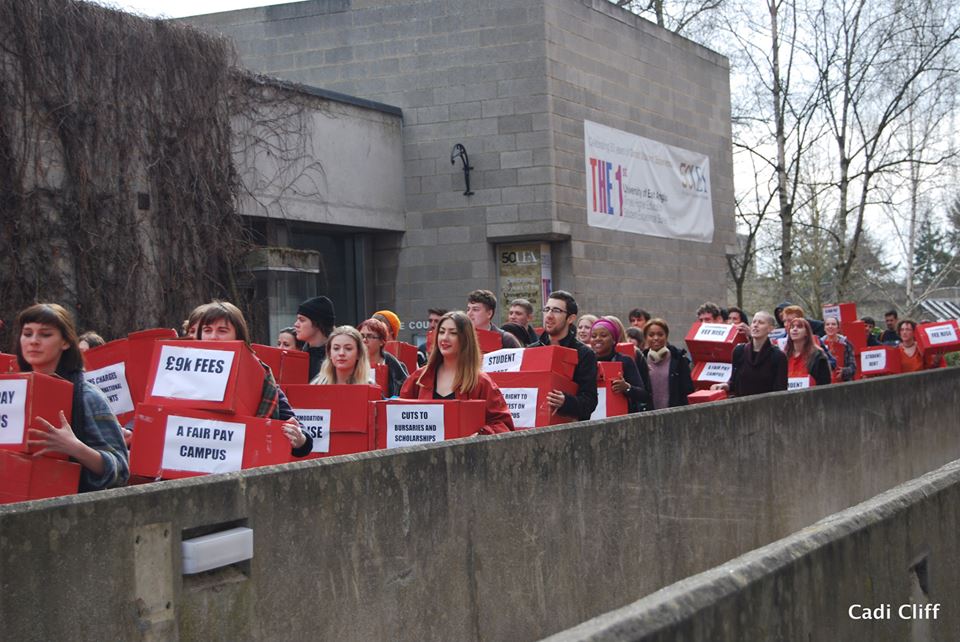 What’s therefore now important is that the fire is reignited this November at the National Demonstration for Free Education. It’s crucial that from here the momentum that was born in the movement against the privatisation of student debt, as well as the partially successful fight against cuts to the Disabled Students’ Allowance is reawakened.

Because now we’re back on the offensive. Having ensured that the debate is no longer around whether or not it is right to profit from the debt of people who are doing something as simple as getting an education, we are now at a point at which we can mould the position of the public discourse to where it should be. We’re now at a stage where over the next few months we can start to demand that our education system be free, fair and fully funded, so that no one is priced out of a degree. In order to get there, we need to be as bold as we were in fighting the sell-off of our loan book, and rebuild a truly nationwide movement that is too big and too vibrant and too radical to be ignored and in doing so remember that we’re only able to build the world we want to see if first we believe it is possible.

One thought on “#STOPTHESELLOFF – THE RESURGENT CAMPUS BASED ANTI-AUSTERITY MOVEMENT: THE STUDENT RADICAL #2”